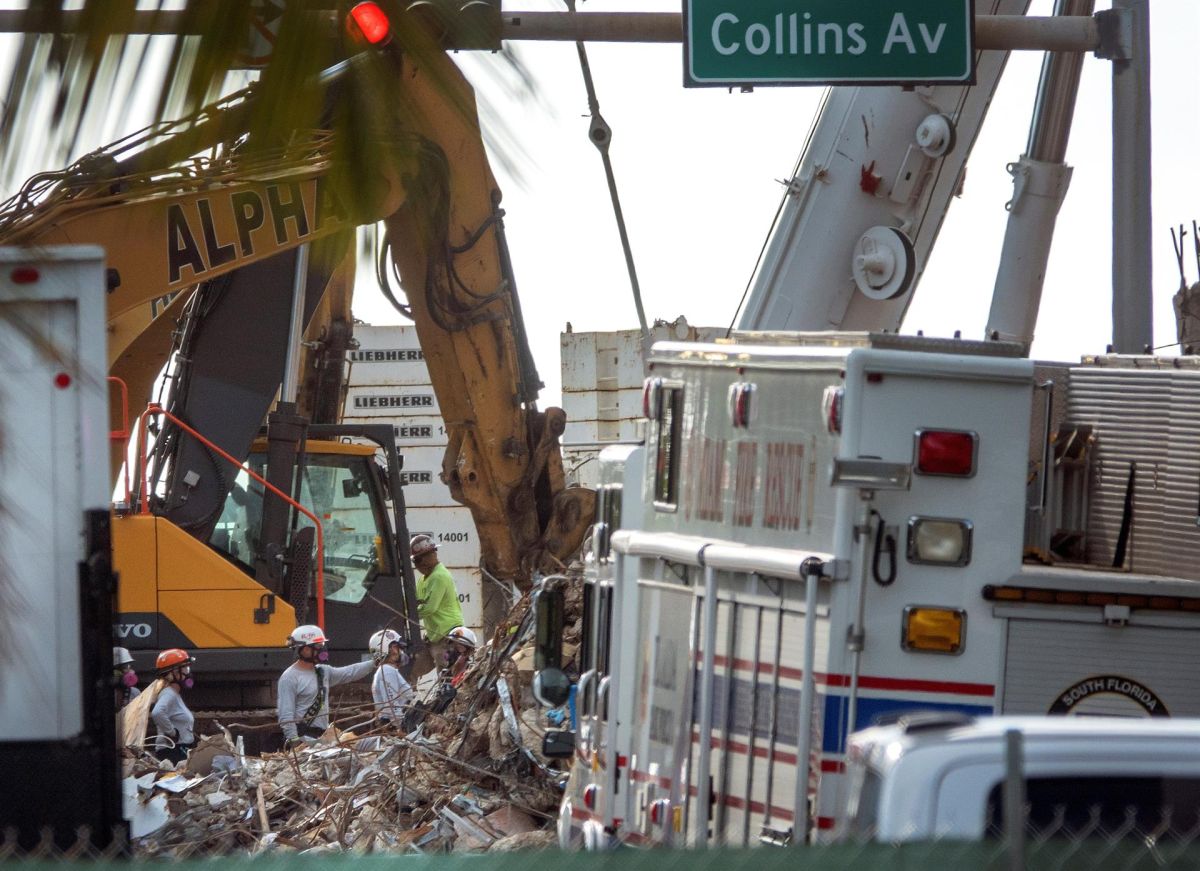 Rescuers working for the fifth day and against the clock at the site of the partial collapse of a 12-story building in Surfside, Miami-Dade, announced this Monday the discovery of the bodies of two new victims, with which there are already 11 deceased, and they assured that “the search will continue.”

The number of missing now stands at 150, while those found alive are 136, said the mayor of Miami-Dade, Daniella Levine Cava, who promised to go “to the bottom” in the investigation to determine the causes of this tragedy that has touched individuals and families from various countries.

Levine Cava, the Governor of Florida, Ron Desantis; the lieutenant governor, Jeanette Núñez; Congresswoman Debbie Wasserman Schultz, who represents the Surfside District, and The heads of the rescue teams appeared before the press after informing the families of the victims of the news.

Use of heavy machinery

Ray Jadallah, Miami-Dade Fire Deputy Chief, iHe indicated that this afternoon the rescuers are going to change their positions on the mountain of rubble so that heavy machinery can lift a large reinforced concrete plate in an area where several bodies have been found these days.

For reasons not yet determined, the Northeast wing of the Champlain Towers building, opened in 1981 and with a total of 136 apartments, collapsed in seconds at 1.30 am (local time) on Thursday, June 24, when its inhabitants slept.

The priority is finding survivors

Fifty-five apartments turned into a mountain of rubble, where today more than 240 people in different roles but with one priority: finding survivors, as he said Surfside Mayor Charles Burkett.

Burkett said that although five days have passed since the collapse, it is still possible to find people alive, as has been shown in earthquakes and other similar catastrophes.

Most of the fatalities identified so far were of Hispanic origin, like many of the rescuers, among which there are teams from other areas of the US and also from countries such as Mexico and Israel.

They are investigating the causes of the accident

The priority remains focused on finding survivors or remains of victims of the collapse, but also signs are sought of the possible causes of what happened.

The Surfside Mayor’s Office has assigned a team of engineers, led by veteran Allyn Kilshemer, the task of determining how he could collapse from top to bottom in a matter of seconds the entire northeast wing of the 12-story, 40-year-old building.

Kilsheimer of KCE Structural Engineers said after visiting the site, in a statement collected by the press, that there is no visible evidence of a major structural failure.

In addition, the Surfside mayor’s office published this Monday a new batch of documents that are in its records about the sinister building, which show, like others published before, the structural and other problems it had.

Among them are some of 2019 in which the Champlain Towers homeowners association they expressed their concern to the municipality about the effects that the construction of a large building nearby could have on the structure.

A year earlier, a report from an engineering firm had indicated that there was “significant” structural damage to the building, due in large part to the fact that a waterproofing sheet in the pool area had been incorrectly placed, which prevented the water from draining correctly and recommended making repairs.

The Miami Herald newspaper published this Monday an information in which it is stated that a month after that report, the official then in charge of these issues in the Mayor’s Office, whom he identifies as Ross Prieto, told Champlain Towers neighbors that the building was “in a very good condition.”.

The Miami Herald contacted Prieto and said he did not remember what he said in a meeting with the condominium board, as recorded in a minute that the newspaper had access to.

The causes of the collapse are already being investigated by the competent authorities, but it is taken for granted that it will be a long and complex investigation and the answers will not arrive as soon as the survivors and the families of the victims wanted.

And more demands on the horizon

The first lawsuit against the Champlain Towers Association was filed on the same day as the collapse by a law firm.s for “not having been able to secure and safeguard lives and property.”

The owner of an apartment in Champlain Towers, Manuel Drezner, and “others in the same situation” who can join the lawsuit once it is filed, claim an initial figure of $ 5 million in damages.

This Monday, two law firms, Morgan & Morgan and Saltz, Mongeluzzi & Bendesky, specialized in lawsuits for falling buildings, reported that they are investigating and exploring possible legal actions regarding the collapse of the building.

“We are actively investigating what caused the building to collapse, if there were warning signs beforehand that were missed or ignored, and if the system of building codes and regulations, which aims to prevent these types of disasters from occurring, failed.” said lawyer René Rocha.