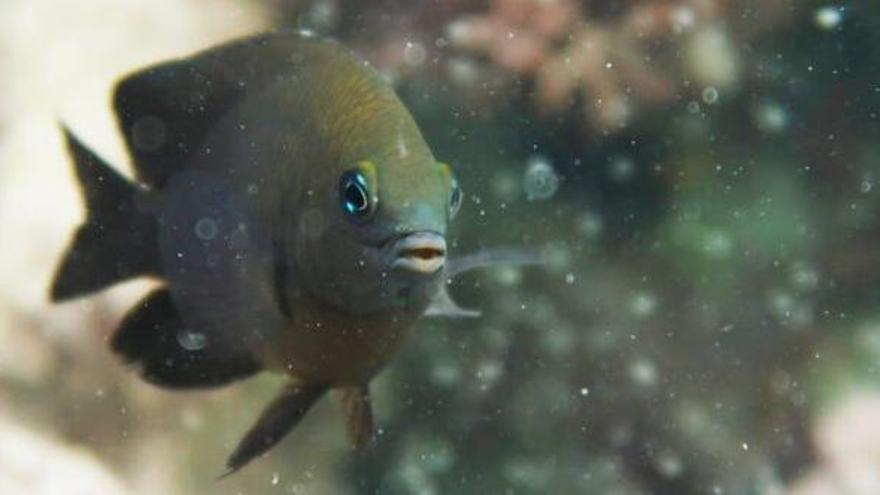 The long-finned damselfish has domesticated the mysid shrimp in a sector of Central America: it uses it to fertilize its kelp farms. It is the first evidence of domestication of other species by an animal other than humans.

As part of a mutualistic relationship that benefits both species, damselfish and mysid shrimp have formed a close bond in an area of ​​coral reefs located in Belize, Central America. According to research by scientists at Griffith University and Deakin University, both in Australia, fish have domesticated shrimp to fertilize their algae production. It is the first scientifically proven example of the domestication of another species by a non-human animal.

According to a release, shrimp also benefit: they find in the shelters inhabited by fish an ideal place to protect themselves from the large number of predators that live in the area. In the study, published in the journal Nature Communications, it is established that this surprising alliance between both species is the first documented and verified case of domestication outside the human environment.

Since our civilization began to group into settlements, different domestications of other animal species have taken place, which were attracted by shelter or feeding conditions that they could not find in the natural environment. Dogs, cats, horses or chickens are some examples of these processes, in which the human being was benefited by some characteristic provided by the domesticated species.

At the same time, changes began in the animals themselves: the wolves that looked for food in the small human groups inhabited by our ancestors were gradually becoming the dogs that we know today. Domestication transformed them into the friendly and companion animals that currently inhabit our homes, distancing them from their wild origin. Can other species face this same process and domesticate other animals?

Although the case of some varieties of ants that use aphids for food purposes and integrate them into their domains is known, no scientific evidence had been obtained so far on a domestication process without human participation. There is also no unanimity on the definition of domestication: some specialists argue that genetic changes must be registered between wild and domesticated creatures, as well as a sustained multigenerational influence over time.

In any case, Australian researchers have a solid basis for determining the existence of a domestication process between damselfish and mysid shrimp. “Damselfish aggressively defend a reef sector where they grow algae for food, but surprisingly they don’t do so with mysid shrimp. Shrimp swarms benefit from the protective shelter provided by fish, fertilize algae farms with their waste and improve production quality, ”said Dr. Rohan Brooker, lead author of the study.

Field studies and behavioral experiments developed by scientists provided scientific evidence indicating that the relationship between both species shows all the characteristics of domestication, within the framework of a process similar to that carried out by humans when raising animals of farm.

According to experts, the domestication of mysid shrimp by damselfish is the first recorded case of a non-human vertebrate that domesticates another species. In addition, the scientists highlighted that the relationship between damselfish and mysid shrimp could leave many clues about the way in which humans domesticated species as familiar today as cats, dogs or pigs, among other examples, for the first time.