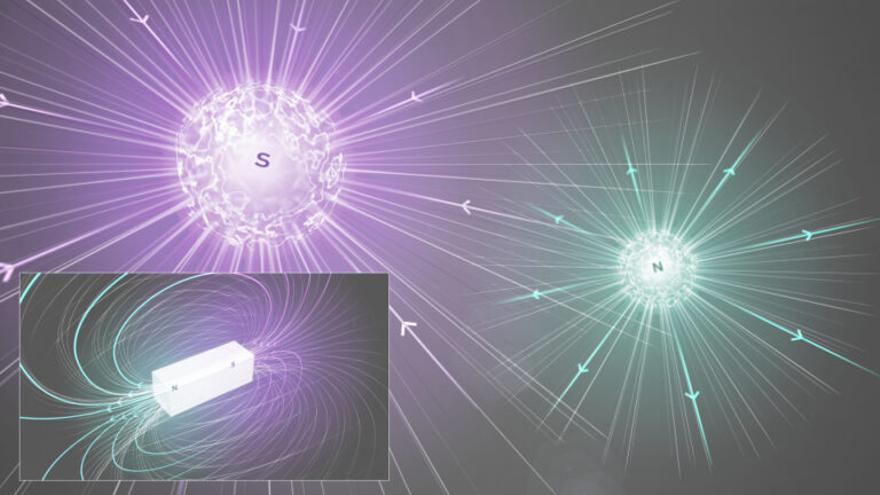 Magnetic monopoles have intrigued scientists for almost 100 years, but they have yet to prove their existence. The last attempt has unsuccessfully searched the Earth’s magnetic field.

A magnetic monopole is a hypothetical elementary particle that would be like a magnet with a single magnetic pole: a north pole without a south pole, or vice versa, something unusual in nature.

The British physicist Paul Dirac predicted its existence in 1931 to solve the asymmetry of electromagnetic phenomena: when magnetic monopoles are introduced into the equations that govern these phenomena (Maxwell), a symmetry emerges in the interaction between the electric and magnetic fields.

Electricity and magnetism are very similar in that they both exert forces on magnetic fields and charges. Furthermore, elementary particles can possess both electrical and magnetic properties.

Electricity and magnetism, however, have an insurmountable asymmetry: electric fields have two types of electric charges, which can be positive or negative, which do not depend on each other. There are particles with only positive or negative charge, without causing the universe to shake.

However, magnetic fields are governed by poles (north and south) that, unlike electric charges, are inseparable: if we split a magnet in half, each part will have both poles.

That means that magnetic monopoles should not exist: it would imply that the magnetic poles are independent of each other and that the north pole could live without the south pole, or vice versa. We cannot imagine the Earth without one of its two magnetic poles.

Surprise! However, in 1982, the Spanish-American physicist Blas Cabrera of Stanford University managed to accidentally detect a magnetic monopoly in a superconducting coil held near absolute zero: but this result has never been obtained a second time.

Only 30 years later, physicists from Amherst College in Massachusetts created the first synthetic magnetic monopoles. They obtained photographs that confirmed the presence of “artificial” monopoles at the ends of small quantum eddies within an ultracold gas.

According to its creators, this result would experimentally prove that the structures imagined by Dirac exist in nature, even if the natural magnetic monopoles remain free.

Despite the efforts made so far in both fields, there is still no reliable evidence of the existence of magnetic monopoles in nature.

The existence of a single magnetic monopole would have far-reaching physical consequences, so the effort to find it continues in the most diverse ways.

Do we have them at home?

Do we have them at home? The most recent attempt has been much more original: it has searched for magnetic monopoles in the Earth’s magnetic field, but it has not found them either.

The authors of this research, led by the physicist of the University of Wisconsin, Yang Bai, and two other scientists from the aforementioned university, consider that, as they move in galaxies, magnetic monopoles could be captured by stars and planets . If so, the Earth would have an additional magnetic charge that can be measured.

And they got to work: they analyzed the data collected by the Swarm satellites, located since 2013 in Earth orbit by the European Space Agency to study the Earth’s magnetic field.

With these data, the researchers created a map of the Earth’s magnetic field lines in order to check if there were any anomalies that could reveal the presence of magnetic monopoles in our immediate surroundings.

However, this exhaustive analysis of the Earth’s magnetic lines did not reflect any anomaly that would allow us to deduce that magnetic monopoles exist and that we have them at home.

The authors of this research emphasize that this result does not necessarily indicate that magnetic monopoles do not exist, but that none, for whatever reasons, have been trapped until now by the Earth’s magnetic field.

The search for magnetic monopoles continues, since we are touching them with our fingers, without being able to get hold of any of them yet. They are too sneaky.

It seems a matter of time before we finally meet them and verify that nature has a “magnetic charge” equivalent to the electric charge present in the electric field.

Then we would have finally discovered the symmetry between electricity and magnetism that Dirac was looking for: in addition to astonishment, it would lead us to look at our microwaves or televisions differently, since, like other technological resources, they are based on the intriguing electromagnetism.

Top image: Magnetic monopoles would have only one north or one south pole. Credit: Daniel Dominguez, CERN.