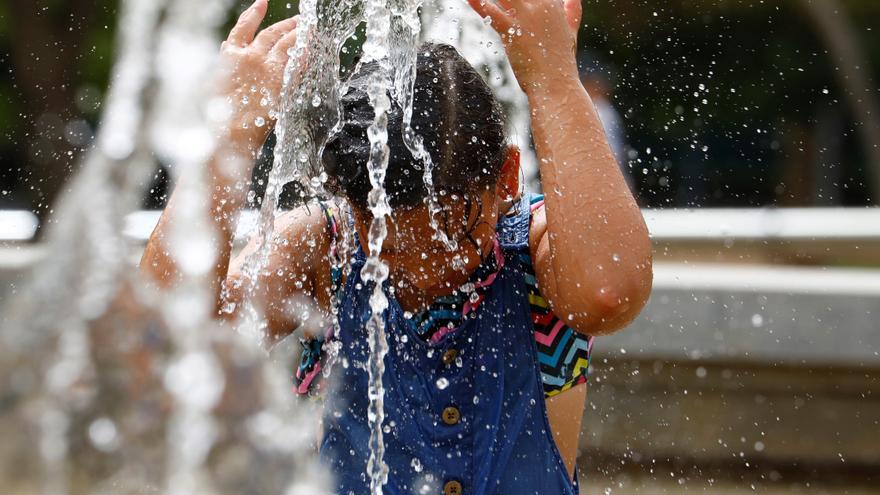 Thermometers They go up again this Sunday until they “hit the ceiling” and reach highs between 41 and 44 degrees, and occasionally up to 47, in the Guadalquivir valley and areas of the center of the peninsula, a suffocating environment both day and night that will not begin to subside until next Tuesday.

For now, only Galicia and the Cantabrian are free from this episode of high temperatures that affects our country since last Friday, as a result of the entry from the south of a mass of hot African air that has been spreading northward.

The consequence is that Spain live the hottest weekend so far this year, with maximum temperatures that reach, and even exceed, 47 degrees in points of the Guadalquivir valley and that at dawn have not dropped below 20 in many areas of the southern half and the Canary Islands, causing torrid nights in which rest is difficult.

A situation of extreme heat that has triggered the weather alarms to the point that this Sunday there are 13 communities on alert, six of them (Andalusia, Aragón, Castilla y León, Castilla-La Mancha, Extremadura and Madrid) with an orange warning (risk important).

At noon it is calculated that in Andalusia it will be reached on time to 44 degrees maximum in the provinces of Córdoba, Granada, Jaén and especially in Seville, and that there will be areas of the Guadalquivir valley where the thermometers even mark 47 degrees.

These extreme values, which would be more than 10 degrees above the usual heat of this time, contrast with the 21 expected today in La Coruña, 22 in Santander, 24 in San Sebastián or 26 in Bilbao and Las Palmas de Gran Canaria, more in keeping with the dates of the year.

In other parts of the country the maximums will also be raised throughout the day and thus in Talavera de la Reina (Toledo) it is expected to reach 44 degrees today; 43 can reach in the province of Badajoz and in Madrid capital 41 degrees are expected in central hours of the day.

According to the predictions of the Aemet, the environment today will be mainly dry and there is only a probability of weak precipitations as of this afternoon in the north of Galicia and Asturias, where the cloudiness will increase as the day progresses.

General view of Samil beach in Vigo this Sunday. EFE

In the rest of the country, the slightly cloudy sky will predominate, although accompanied by intervals of medium and high clouds, without ruling out that in isolated points of the interior of the peninsula they cause some dry, occasional and isolated storms in the second half of the day, which could be accompanied of very strong gusts of wind, especially in the northeast of the peninsula.

There can also be a shower or storm in the eastern end of the Iberian system and both In the Canary Islands, as in the extreme southeast of the peninsula, there is a probability of haze, which could extend during the day to a good part of the Peninsula and the Balearic Islands, with the possibility of coastal fogs on the Alboran coast and intervals of low clouds in Melilla, north of the Canary Islands and the Strait area, where the east wind will blow.

Weather forecasts suggest that at the end of the day a storm located in the British Isles will cause temperatures to begin to drop in western Galicia and then in the rest of the Peninsula, except in the east, where the thermometers will rise significantly, over on the coast.

The heat will continue on Monday

Tomorrow, Monday, it will continue to be hot in points of the southeast -44 degrees are forecast in the province of Almería- and the east of the peninsula, especially in the Communities of Murcia and Valencia, where the red alert is activated (extreme risk) due to temperatures between 42 and 44 degrees on the south coast of Valencia and Alicante and in points of the Vega del Segura.

Aemet calculates that until Tuesday the 13th there will be no general drop in temperatures, which will be noticed mainly in the Mediterranean area and in the Canary Islands, so that until then the values ​​of these dates will not be recovered, thus ending the episode of high temperatures.

A “extraordinary” episode that the Aemet does not qualify as a heat wave, since they remember that for this to be the case, 3 requirements must be met: that the heat be intense, that it covers a good part of the territory and that it lasts at least three consecutive days.

Despite this, the high values ​​that are being registered these days have made the General Directorate of Civil Protection and the OCU advise extreme caution to avoid heat stroke and take measures, such as hydrating, protecting yourself from the sun, eating and dressing appropriately, avoid exposure in central hours of the day and in general, any outdoor activity that endangers the health, especially of children and the elderly.