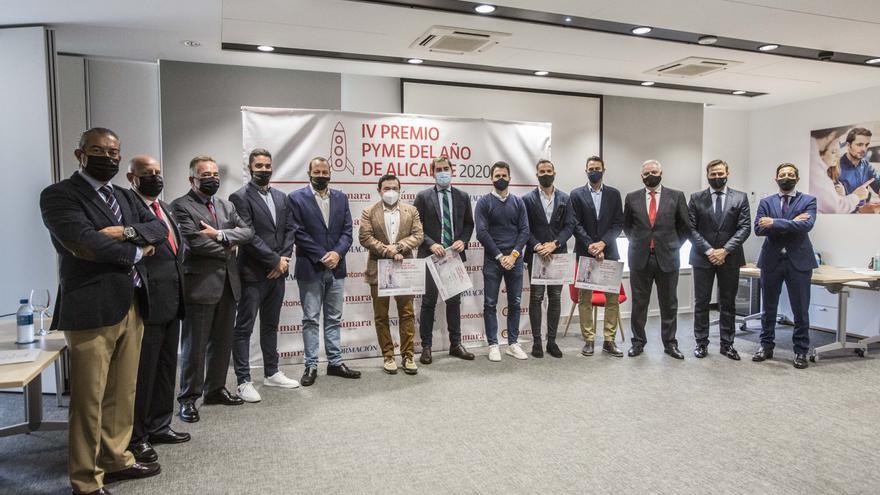 The company FacePhi Biometría, dedicated to biometric solutions for the identification of identity through facial recognition, has received the SME of the Year Award 2020, an award granted by Banco Santander and the Alicante Chamber of Commerce, in collaboration with the Chamber of Spain and the newspaper INFORMACIÓN.

Javier Mira Miró, CEO and Salvador Martí Varó, executive president of Facephi were in charge of collect the prize, in an act that was held at the headquarters of Banco Santander and was attended by the president of the Alicante Chamber of Commerce, Juan Riera, the commercial director of Empresas del Santander Bank in the Territorial of Valencia-Murcia, Mario Ciurana; the provincial deputy Alejandro Morant and the managing director of INFORMATION, Ángel Angulo.

The Alicante company has a presence in 25 countries and has carried out more than a billion authentications. His impulse to improved customer experience and the protection of citizens’ data are sufficient merits to win this award.

The Alicante SME of the Year Award 2020 has included, with extraordinary character, a special mention to the “Best Initiative in the fight against covid-19”. The company Resistencias Industriales Maxiwatt has been recognized in this category for its performance against the pandemic. During the confinement, this company developed with the Hospital of Elche the first machine adapted to any ambulatory manual respirator / resuscitator, a portable machine of which 300 units can be manufactured daily. I know they donated 3000 units and they have helped people in vulnerable situations in different actions.

The Alicante SME of the Year Award 2020 has included, with an extraordinary character, a special mention for the “Best Initiative in the fight against covid-19”.

In addition to the provincial award and the special mention, four second prizes have been awarded in the Internationalization categories; Innovation and Digitization; Training and Employment; Y Responsible company.

The Internationalization Accésit has been awarded to the company The Hoff Brand, Dedicated to manufacture and marketing of slippers through the internet since 2016. Their shoes blur the line between quality, designs incredible and really fair prices and since then they have sold more than 250,000 in more than 70 countries.

The second prize for Innovation and Digitization, has gone to Forest Chemical Group R&D chemical company specially dedicated to industrial adhesives, standing out in nanotechnology and biotechnology research with the aim of manufacturing products and materials with high added value, which place it at the global forefront of its sector.

The Second Prize for Training and Employment has been awarded to Quinton Labs, a biotechnological laboratory dedicated to manufacture of natural specialties based on microfiltered seawater. They have a program for their employees wellness, Health Y happiness with a catalog of more than 94 measures for conciliation.

And finally, the Alicante Responsible Company Second Prize is for Agropaque, a family business that grows, processes and distributes top quality fruit and vegetable products. It is a company concerned with the environment, which ensures the health of its workers and of society in general.

FacePhi It will compete for the 2020 National SME of the Year Award, which will be chosen from the winners in each province. The name will be known in the first months of 2021, in a great event to be held in Madrid. Likewise, the winners of the Consolation prizes They will also attend the national final in their respective categories, where the companies that have stood out for their Internationalization actions, their Training and Employment or Innovation and Digitalization policies and those that have implemented more measures of Corporate Social Responsibility.

Industrial Resistors Maxiwatt, with more than 50 years of experience in the sector and a leader in Europe in the manufacture of cartridge resistors, has been one of the main protagonists of the Awards of the Alicante Chamber of Commerce and Banco Santander with its special mention to the “Best Initiative in the fight against covid-19”, created this year with extraordinary character to recognize the work of SMEs in the face of the pandemic.

The company, located in the Elche Business Park and which has recently acquired a 12,000 m² warehouse, stands out for its advanced R + D + i section, which allows it to be a world leader in what its CEO José Rodríguez defines as “urgent manufacturing”. Its products are aimed at various types of industry such as automotive or plastics, but right now they are immersed in the sector of feeding and in the medical and pharmaceutical industry.

But, if the company has stood out in recent months for something, it is for its contribution to essential medical products have been able to reach the whole of society in the worst moments of the health crisis.

By employing the laser cutting technology, the firm from Elche launched a production line in a matter of hours to be able to produce up to 3,000 robust and portable respirators that were presented at the General Hospital of Elche. “Our goal was to be able to help all the people who were in a vulnerable situation,” says José Rodríguez.

Among other initiatives to alleviate the effects of covid-19, Maxiwatt also launched a resistance donation campaign for all companies in 3D printing – Coronavirus Makers movement– who were in the same fight.

Agropaco, the most responsible garden in Alicante

Agropaco is a family business that produces horticultural products seasonal and sold from Guardamar del Segura to thousands of homes throughout Europe. They are the fourth generation of farmers who have cultivated and pampered the land since 1892 and, well deserved, have taken the award to the Responsible Company 2020 in the Awards of the Alicante Chamber of Commerce and Banco Santander thanks to his work.

Francisco Mora, CEO of Agropaque, defines the philosophy of his company as “sustainable by nature”. Thus, for years they have been launching a multitude of initiatives that support this motto: «From the beginning we have reinvested the profits in investments of renewable energy, the start-up of a water laboratory, the obtaining of the Water Footprint certification or the installation of the first Phytobac in the province of Alicante, with the collaboration of the multinational Bayer. It is an innovative biological bed method that degrades potential pollutants, avoiding the contamination of surface and coastal waters».

The importance given to security of its workers and workers is another of the points that have made the company rise with this distinction of responsibility.

In this sense, Agropaco makes significant investments in training and in improving safety in the rural work environment. “Doing 10 minutes of Zumba before each day, helps prevent the appearance of musculoskeletal injuries among employees and encourages daily physical exercise.” In addition, most of the positions of responsibility in the company are held by women, a necessary milestone to achieve the goal of real equality in companies of our country.