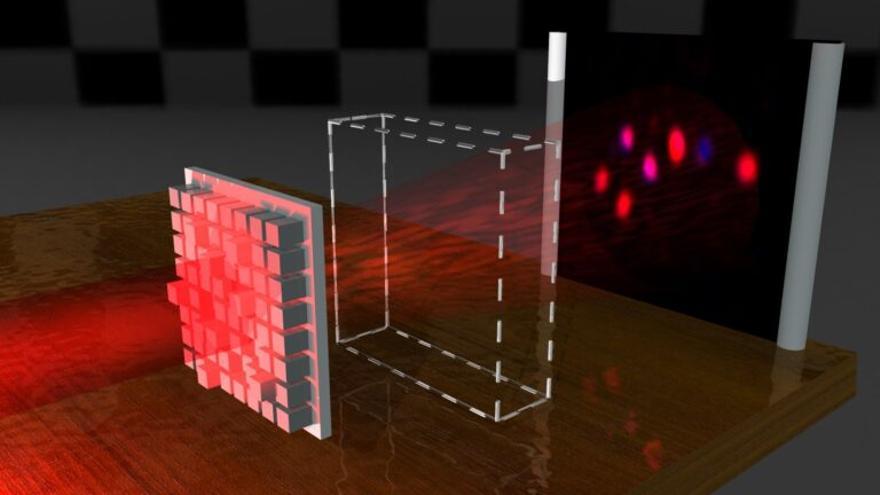 Researchers from the University of Utrecht and TU Wien (Vienna) have created special light waves that can penetrate opaque objects and make them practically invisible, as reported in an article published in the journal Nature Photonics.

When we look at an object, what we really perceive is the interaction of light with the object we are looking at. If light didn’t hit objects, we simply couldn’t see them.

What Austrian scientists have achieved is that light passes through objects, instead of bouncing back towards our eyes: this makes them invisible, both to us and to any camera.

They have found that beams of light can be built tailored to an object: when they reach it, those beams of light are not modified, but rather continue their trajectory as if the object were not really there. That means that scientists can not only look at what is behind an object, but also what is inside it.

Specific light waves To arrive at this discovery, the researchers used a layer of opaque zinc oxide dust (randomly arranged nanoparticles): they calculated exactly how light is scattered through that dust and how it would have dispersed if the dust were not in the environment. .

In this way they discovered that a certain type of light wave was registered by a detector on the other side of the dust with exactly the same pattern, although a little weaker than when they sent it.

One of the architects of this discovery, Stefan Rotter, explains about it in a release: “Waves on a turbulent water surface can take an infinite number of different shapes and, similarly, light waves can also be configured in innumerable different shapes. Each of these light wave patterns changes and is deflected in a very specific way when sent through a messy medium. ‘

And he adds: »we have shown that there is a very special class of light waves, the so-called scattering invariant light modes, that produce exactly the same wave pattern in the detector, regardless of whether the light wave was only sent by the detector. air or whether it had to penetrate the complicated layer of zinc oxide. ‘

It is hard but not impossible

It is hard but not impossible It has not been easy, because, although there are a theoretically unlimited number of light waves, it is necessary to find those modes of light that, applied correctly, can achieve the invisibility of an object.

On statements to The Independent, Rotter explains that “the light fields that we introduced in our work not only appear to be special in the output field patterns that they produce behind the object, but also within it.”

This method of finding patterns of light that penetrate an object undisturbed could therefore be used for image processing, the researchers note.

“In hospitals, X-rays are used to look inside the body; they have a shorter wavelength and therefore can penetrate our skin. But the way in which a light wave penetrates an object depends not only on the wavelength, but also on the waveform ”, explains Matthias Kühmayer, another of the developers of this technology.

‘If you want to focus light within an object at certain points, then our method opens up completely new possibilities. We were able to show that, using our approach, the distribution of light within the zinc oxide layer can also be specifically controlled. ‘ This could be interesting for biological experiments »he adds.

Ultimately, Rotter believes that it is only a matter of time before measurement tools are fast and inexpensive enough to enable even more sophisticated applications.

Specially designed metamaterials have been tried at the nanotechnology scale, as well as a light bending material to make people and objects almost invisible to the naked eye.

The development of Austrian scientists is closer to that achieved in 2020 by Canadian scientists: they manufactured invisible photonic circuits, taking advantage of the electronic resonance of materials processed with laser.