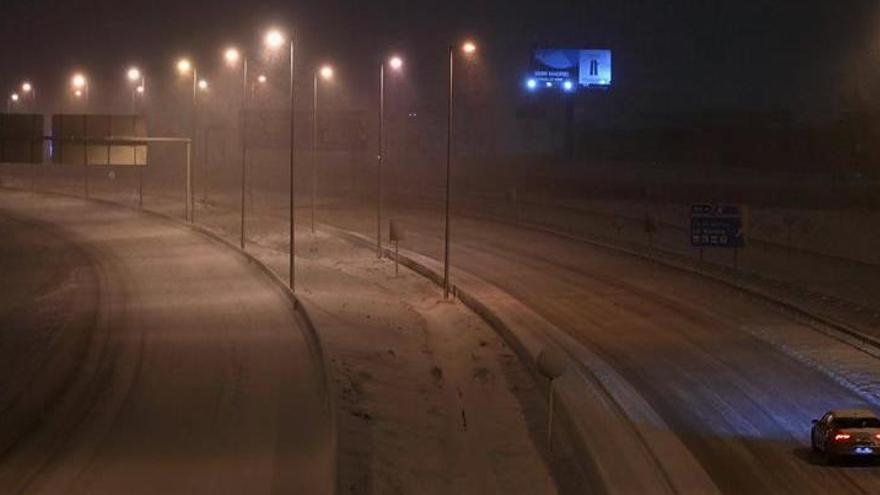 The Military Emergency Unit (UME) has been activated tonight to collaborate with the Madrid emergency services in the rescue of drivers and people trapped in their vehicles on the roads of the community because of the nevada fall throughout the day due to the storm Filomena, reports EFE.

The Ministry of Defense has explained that the Directorate of the Winter Inclement Plan has requested the activation of the Military Emergency Unit (UME) for support tasks of road cleaning and rescue of vehicles trapped in different points of roads in the region .

Specifically, teams have been requested to serve the municipalities on the A5 highway axis (Móstoles and Alcorcón); from the A3 (Rivas Vaciamadrid and Arganda area) and from the A-4 (Aranjuez and Ciempozuelos).

“We have already organized the corresponding columns pending receipt of details of the coordination of the deployment points,” Defense assured.

The large amount of snow that fell due to the storm Filomena has even forced cut off some points of the ring roads and accesses to the capital from Madrid. Among the most affected highways were the A-3, A-4 and M-40 and even the M-30.

The mayor of Madrid, José Luis Martínez Almeida, has reported late at night through social networks that two lanes have been opened on the A1 and A3.

The historic snowfalls left by the storm since this Thursday in much of Spain have caused, in addition to numerous roadblocks, cancellations and delays in trains and suspensions of flights and maritime links, the closure of the airport Madrid, which has already diverted a score of flights to the airports of Barcelona, ​​Valencia, Alicante and Bilbao.

Although the most intense snowfalls are forecast according to the State Meteorological Agency (Aemet) in the next morning, transport services, especially by road and rail, have already been greatly affected by rainfall and the strong gusts of wind that are leaving the storm, which runs through Spain from south to north and is expected to continue active until next Monday.

The Military Emergency Unit (UME) has deployed 98 military personnel and 48 vehicles in the operation to collaborate this morning in the rescue of drivers and people trapped in their vehicles in the community of Madrid because of the snow.

According to sources from the Ministry of Defense and Emergencies 112 of the Community of Madrid, the military troops have been sent to the A5 highways, on the Móstoles and Alcorcón axes; to the A3, in the area of ​​Rivas Vaciamadrid and Arganda, and to the A-4, in Aranjuez and Ciempozuelos.

According to the Ministry of Defense, three columns have already emerged for these rescue and cleaning tasks on the roads in the framework of the Severe Winter Storms Operation (TIS).

A flight that was scheduled to land at the Adolfo Suárez Madrid-Barajas airport from Santa Cruz de Tenerife has been diverted to Seville, while the two connections for tonight Madrid-Almería have been canceled due to the cancellation of departures and arrivals to Madrid due to accumulation of snow.

Sources from the airport manager Aena have explained to EFE that, so far, the direct flight that had to land in Madrid from the Canarian city has been diverted, while the two (roundtrip) between Almería and Madrid have finally been canceled.

In the next few hours it will be decided whether the pending operations with Madrid will resume or if a specific time is set at which the flights will be operated again.

Meanwhile, in Andalusia, the San Pablo airport in Seville will remain open until 1 a.m., or 3 a.m. if necessary, and Malaga airport, open 24 hours a day, operates its own flights and is on alert in case there are deviations from the they have to reach the capital of Spain.

Aena has decided in the early hours of the night to paralyze takeoffs and landings at Adolfo Suárez Madrid-Barajas Airport due to poor runway and visibility conditions, and flights to the airports of Barcelona, ​​Valencia, Alicante and Bilbao began to be diverted .

Aena’s decision came after Enaire, the body in charge of air traffic control, decided to start applying the diversion procedure, around 9:15 p.m., due to poor visibility due to the storm.

The Madrid City Council has suspended the EMT urban bus service for today due to the heavy snowfall in the last hours on the streets of the capital due to the storm Filomena.

This has been reported on social networks by the delegate for the Environment and Mobility of the Madrid City Council, Borja Carabante, who has justified the measure for “security reasons” due to the poor conditions of the roads for driving.

At the same time, Carabante has asked citizens not to make unnecessary trips in their vehicles.

In addition, the Madrid City Council has reported this morning that due to weather conditions the waste collection service and the clean points service is suspended while this situation lasts.

The consistory has requested the collaboration of citizens so that they do not leave their waste on public roads.