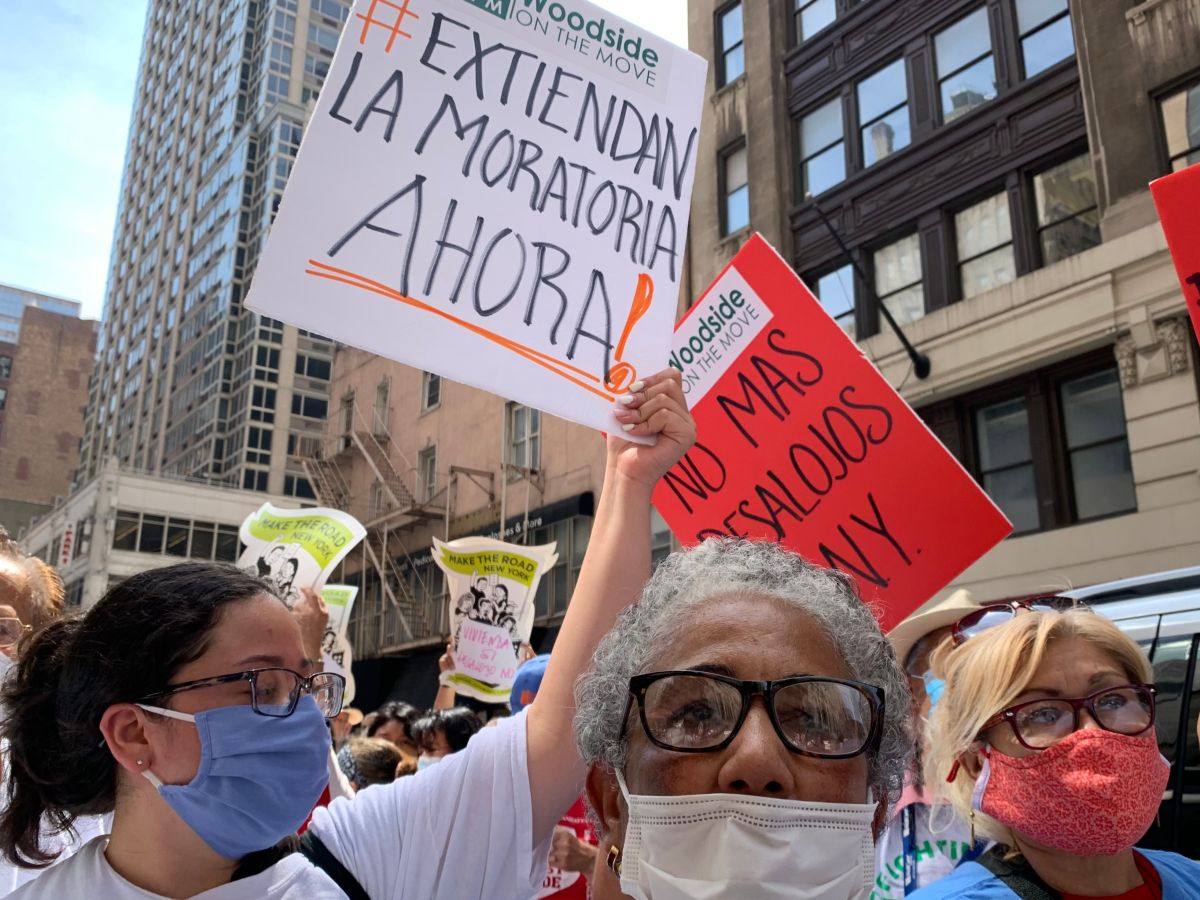 The last saturday january 15 expired the rent moratorium in the state of New York that, in the midst of the coronavirus pandemic, COVID-19, protected delinquent tenants from being evicted from their houses and apartments for more than a year and a half.

And now, with the owners of the real estate with free rein to start eviction proceedings to those who owe rent, New York political leaders, activists and tenants, made an urgent call on Tuesday to the state, federal and municipal governments, to adopt immediate measures, in order to stop what is seen on the horizon as a crisis unprecedented that would leave thousands of families on the street.

So warned the Manhattan Borough President, Mark Levine, who asked the governor Kathy Hochul to reinstate the rent moratorium, at least until June 2022, just as he asked the City to urge the housing courts not to move any eviction proceedings against tenants who do not have legal representation in their cases.

“We are sounding the alarm today for what could become a large-scale, uneventful avalanche against potentially evictable tenants, on a scale we have never seen before in New York,” the Manhattan political leader said at a news conference. with presidents of other counties and members of the City Council.

Levine warned that if an extension of the moratorium is not approved soon and if more resources are not allocated for lawyers, thousands of families, 90% of them with cases of eviction for non-payment of rent, they will be at imminent risk of adding to the already high population of homeless people in the midst of the pandemic.

“Many tenants have lost their livelihoods and are stressed, so we continue to ask for state action just as the eviction moratorium expired on Saturday and eviction processes have already begun,” said the politician, also asking that the New York City Council approve the call “law of right to a lawyer 2.0,” legislation that seeks to provide free attorneys to all vulnerable tenants facing eviction.

“We are calling for no housing court case to proceed without a tenant having the right to an attorney. Many judges do this, but we demand that this be the case for everyone,” Levine reiterated, while urging the federal government to also inject additional funds into the ERAP rent relief program, which has helped thousands of families pay their rents. , but whose money has fallen short to reach out to all of New York’s late renters, many of whom haven’t even applied yet.

Antonio Reynoso, Brooklyn Borough President, joined the same call and called on Albany to act quickly by extending the rent moratorium and passing critical laws like attorneys for tenants and the just cause eviction law that would protect those who They have not been able to pay their rent.

“We are in the midst of a widespread crisis towards homelessness, which was triggered by COVID and we must take immediate action to protect the most vulnerable people, because if we don’t do it, it will exacerbate the homeless crisis,” said the politician. “We badly need the federal and state governments to do more to help people behind on their payments. It’s not that we’re against landlords or homeowners, but we know we need to find more resources to protect everyone. If the moratorium is not extended, we will see what we are already seeing in the courts with eviction requirements.”

Janet Peguero, vice president of county of the bronx, stated that despite the fact that thousands of tenants applied to the ERAP aid program, still the resources have not been assigned to their landlords, for which he also insisted on the urgency of approving laws that increase the right of legal assistance to tenants who are taken to court, because according to what he said, data shows that in 84% of tenants who fought evictions with the help of lawyers were able to stay in their homes.

County chiefs also asked tenants to find themselves in the middle of eviction orders, which do not leave your homes or be filled with fear and on the contrary, they urged them to call the 311 line and request legal help, because as President Reynoso said, “they have rights” that must be defended.

Randy Dillar, leader of the organization defending tenants CASA (Community Action for Safer Apartments), strongly criticized Gov. Hochul and urged her to join state Legislature leaders in reinstating the rent moratorium, for another six months, while more protections are passed.

“We have a million tenants relegated and nobody has talked about how many of them have lost their loved ones in the midst of the pandemic, nobody has talked about the great crisis of children learning remotely, nobody has talked about the suffering of the tenants and now they put another burden on them: eviction, in the midst of a pandemic, with 214,986 renters evicted“said the activist. “Let’s be clear, we are talking about mothers, fathers, grandparents, children. We know that (the State) found money for everyone except the tenants. They gave aid to the MTA and not to the tenants. We already have a homeless problem and this is going to make everything worse. That is why we demand that the government extend the moratorium until June 2022 and give more resources to the ERAP fund and that they approve the law on the right to lawyers for tenants.”

Also Read  How does WhatsApp make money if its service is free for most users?

Shaun Abreu, who is making his debut as a member of the Municipal Council, and who has experience as a tenant attorney, also stressed that together with the extension of the rent moratorium by the Hochul Administration, it will be the extension of the law of lawyers in processes of evictions, which will make a difference amid the worrying landscape seen with renters being taken to court.

“The law approved in its first version by the Council would have meant that in the 1990s families like mine, who were evicted when I was 9 years old, would have been able to stay in our apartment, because as a lawyer I have seen the impact that representation has legal about tenants, where we know that 84% of families are able to stay inside their homes“said the new councilor. “We have to make sure that everyone has the right to legal representation. We can achieve a lot by working together.”

The councilor for El Bronx Althea Stevens, described the end of the rent moratorium as a low blow to the tenants of New York and asked that the different levels of government see the seriousness of what is about to happen if they do not take action.

“The end of the moratorium was a shock and trauma for families and children who are already dealing with trauma. Having evictions now is very strong and we can really avoid traumatizing them more than they are already providing resources, because it is 100 percent unacceptable that this is happening when we know that housing should be a basic human right,” said the Bronx politician.

Alexandra Marin, a building tenant in that county who owes more than a year in back rent due to lost income following the COVID pandemic, implored the Hochul Administration to extend the moratorium, otherwise she fears thousands of tenants like her end up with your things in the street and thrown to their fate.

“Without protections, what will happen to us? We are going to end up being helpless and with more traumas than the pandemic has left us, ”said the Mexican, who declared herself very distressed. “If they don’t shake hands with rent payments, there will be a worse crisis in the midst of this pandemic.”

Former Assemblywoman and current Councilor Carmen de la Rosa, reminded state legislators and Governor Hochul that the future of thousands of families is in their hands and urged them to act quickly and support a piece of legislation that prohibits evictions in cold weather.

“They have the power to extend the moratorium and the reality is that sending entire families to the streets when it is cold outside and in the midst of such a pandemic is a wrong action. We must remind them of the sense of humanity, which is why we need the moratorium and the just cause eviction law to be approved,” the politician said.

The Ombudsman, Jumaane Williams, criticized Governor Hochul and assured that putting a stop to the rent moratorium in the middle of winter, giving way to eventual stampede evictions, is serious.

“In the middle of winter, in the middle of a wave of coronavirus, having this moratorium end, in addition to not supporting ‘good cause’ eviction protections, makes me believe that the governor may not understand the magnitude of the problem, or she may do not have the capacity to fulfill Williams said.

Regarding the urgency that the City’s housing courts only hear eviction cases when tenants have legal representation to fight their cases in court, the Alcalde Eric Adams He said they will check it out.

“We appreciate the Borough Presidents’ proposal and will thoroughly review it,” he said. Charles Lutvak, spokesman for Mayor Adams.

The Governor’s Office Hochul did not respond to the questions of the county presidents and councilmen and they did not refer to whether or not there is a plan soon to reinstate the rent moratorium against evictions.