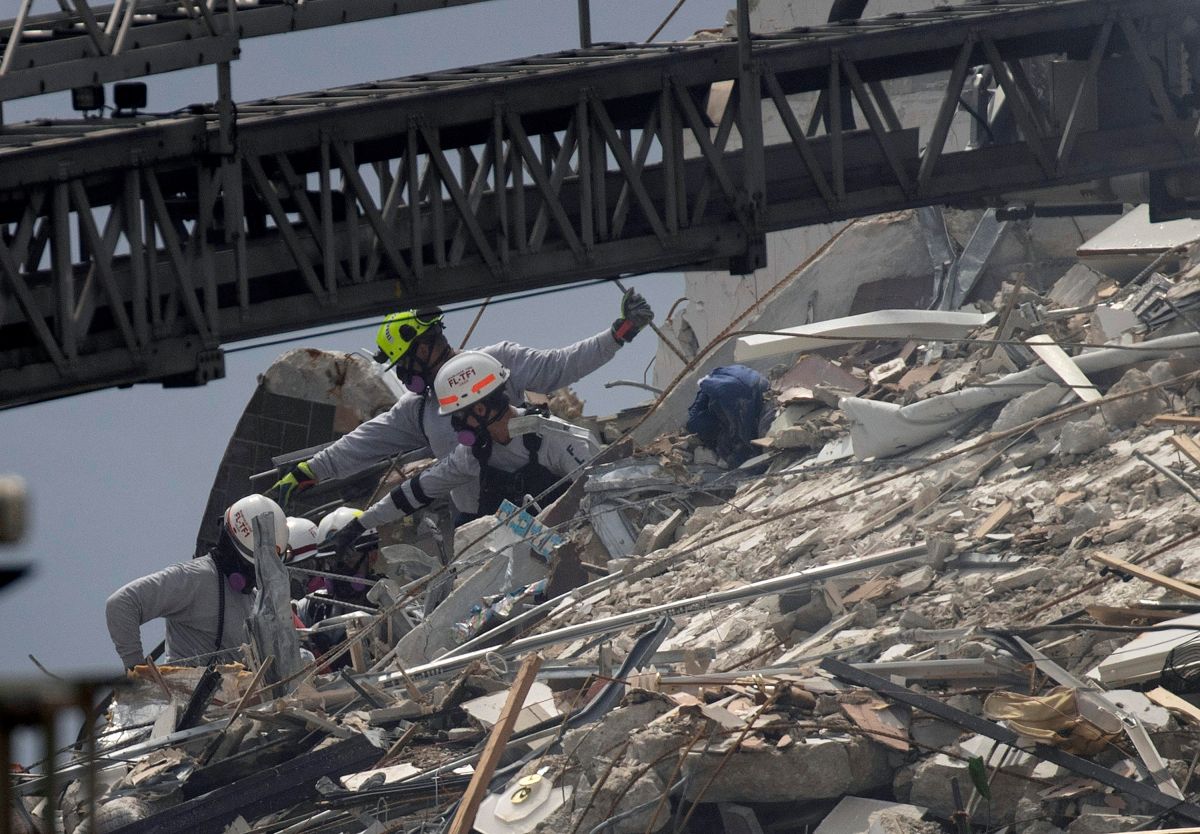 MIAMI, Florida – The search for survivors of a partial collapse of a beachfront residential building in Miami-Dade continued Friday as the number of dead and missing increased to 4 and 159, respectively, in the midst of the desperation of hundreds of people to know about theirs.

Miami-Dade Mayor Daniella Levine Cava and Police Chiefs Freddy Ramírez and County Firefighters Ray Jadallah worked on Friday to convey hope that it is still possible to find people alive under the huge pile of debris formed after the collapse of an entire wing of the building.

At Champlain Towers, referred to by local media as “ground zero,” the same term used when the 2001 attacks on the Twin Towers in New York, An intense activity was taking place today with the aim of searching for those who, more than 24 hours after a tragedy still without explanation, are still missing.

The number of missing people increased from 99 to 159 between Thursday and Friday, because we now have more precise information about the people who were inside Champlain Towers when at 01:30 local time (06:30 GMT) on Thursday the northeast wing the building collapsed in seconds.

That information comes from family and friends, who have gone to the family reunification center enabled on Thursday a few blocks from the damaged building with photographs and even documents of people who are missing after the collapse.

According to television channels, DNA samples are being taken to facilitate identification if found.

With cell phones in hand to display photos of their loved ones on the screen, these people talk to journalists, tell life stories of the disappeared and pray for them to appear.

A few blocks away, in Champlain Towers, some of the debris began to be removed with cranes and other heavy machinery while in other areas of the mountain of iron and concrete, rescuers, aided by dogs and sonar devices, looked for signs of lifetime.

In other areas they are removing by hand and one by one each piece of the jumble of iron, cement and furniture remains, according to what could be seen in television images.

The tasks are made difficult by the rain and wind that hit South Florida today.

Levine Cava stressed that “the hope of finding people alive” remains and the search will continue despite the “extreme risk” it means for rescuers, who have worked all night in shifts and today number 130.

At a press conference, the mayor highlighted the work they are doing and said that they are so motivated that there are times when they must be “taken” out of the mass of materials from the collapse, otherwise they would continue without resting.

The more than 100 rescuers They have not heard voices but they have heard sounds, which, according to the Miami Dade fire chief, may not necessarily be produced by humans but may be due to movements of the piled up materials.

There is a more careful search in those places, Jadallah explained.

Today, for now, the teenager who was rescued from the rubble a few hours after the collapse and captured by the first cameras arrived at the scene was identified.

It’s about Jonah Handler, 15 years old and baseball player at Monsignor Edward Pace High School from Miami Gardens, who, according to Miami Local 10 television, is still admitted to a hospital.

He managed to be removed from the remains of the building thanks to the intervention of Nicholas Balboa, who was walking his dog when a building in the complex collapsed in seconds and shortly after he heard Handler’s cries for help.

Bachelet’s relatives among the disappeared

The local media also give an account of the names of some disappeared, including some 25 Latin Americans who lived in the building or were staying temporarily in it.

Among them is the marriage of Claudio Bonnefoy, 85, and his wife, Maricoy Obias-Bonnefoy, 69, both from Chile, and who according to their relatives live on the 10th floor of the damaged building.

Total, 102 people from the damaged building have been located, according to the mayor of Miami-Dade.

The building, with 12 floors and 136 apartments and located on the beachfront, it was inaugurated in 1981 and has just been the subject of a mandatory inspection for its 40 years.

According to experts, it will take months, and perhaps years, to determine the causes of the collapse.

Lawsuit against the Champlain Towers association for $ 5 million.

The Local 10 channel reported that the first lawsuit against the Champlain Towers association was filed on the same Thursday, for $ 5 million.

Personnel from the Federal Emergency Management Agency (FEMA) will join the search for possible survivors and will also help with assistance to relatives, according to Levine Cava.

The assistance offered by the federal government comes after the governor of Florida, Ron DeSantis, at the request of the mayor, declared an emergency in Miami-Dade County due to the partial collapse of a building in Surfside, a small city with a population mostly Jewish.