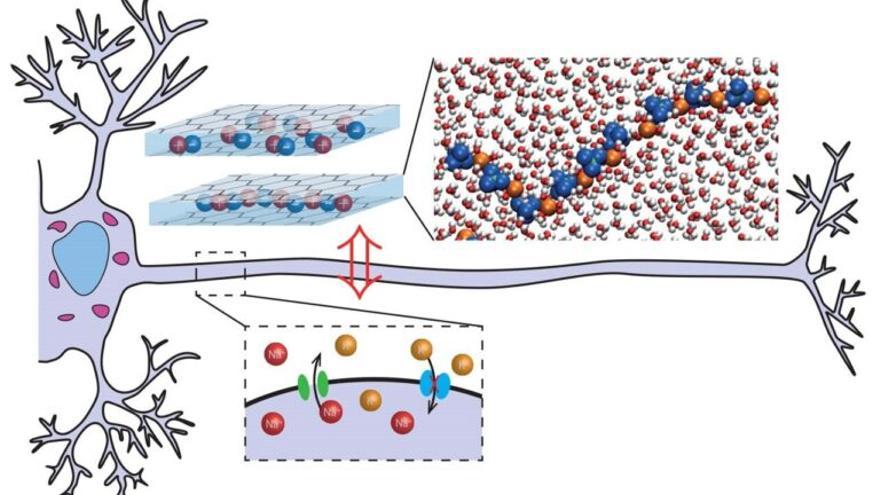 Scientists from the CNRS and the Ecole Normale Supérieure – PSL have discovered how to develop artificial neurons using ions to transport information, in the same way that biological nerve cells do.

Their work, published in the journal Science, reports that devices made of a single layer of water that carry ions within graphene nanoparticles have the same transmission capacity as a neuron, reported in a release.

With an energy consumption equivalent to two bananas a day, the human brain can perform many complex tasks. Its high energy efficiency depends in particular on its base unit, the neuron, which has a membrane with nanometric pores called ion channels, which open and close according to the stimuli received.

The resulting ion fluxes create an electrical current responsible for the emission of action potentials, signals (electrical discharge waves) that allow neurons to communicate with each other.

Artificial intelligence can perform all these tasks, but only at the cost of energy consumption tens of thousands of times greater than that of the human brain.

Emulating the brain Therefore, the current research challenge is to design electronic systems that are as energy efficient as the human brain, for example, using ions, not electrons, to carry information.

To do this, nanofluidics, the study of how fluids behave in channels less than 100 nanometers wide, offer many perspectives.

In a new study, a team from the ENS Laboratoire de Physique (CNRS / ENS-PSL / Sorbonne Université / Université de Paris) shows how to build a prototype of an artificial neuron made up of extremely thin graphene slits containing a single layer of molecules of Water.

Also Read  Lose weight: to lose fat and gain energy it is important to consume carbohydrates

Scientists have shown that, under the effect of an electric field, the ions in this layer of water assemble into elongated groups and develop a property known as the memristor effect: these groups retain some of the stimuli that have been received in the past.

Using theoretical and digital tools, scientists have shown how to assemble these groups to reproduce the physical mechanism of emission of action potentials and, therefore, the transmission of information.

This theoretical work continues on an experimental basis within the French team, in collaboration with scientists from the University of Manchester (United Kingdom).

A matter of proving it

A matter of proving it The goal now is to experimentally prove that such systems can implement simple learning algorithms that can serve as the basis for the electronic memories of tomorrow, which means being able to remember through artificial neurons.

It is not the first time that a development of this nature has been achieved.

The new model is a new version of a memristor, or memory resistor, whose liquid nature is its main innovation: most existing memristors do not use liquid, which is how the brain does.

Although the applications of this new memristor are still mere speculation, experts believe that it is a development that will help to better understand how the brain processes information.

It will also help develop new theories of computation that are similar to brain processes, stand out in this regard the magazine Livescience.

This new development also advances in the line of artificially increasing biological neuronal functions, as the Neuralink project of Elon Musk intends: it is proposed to implant computer chips in the brain to open a new era in human cognition.

Now we know how to implement electronic memories following the same system that the biological brain uses.