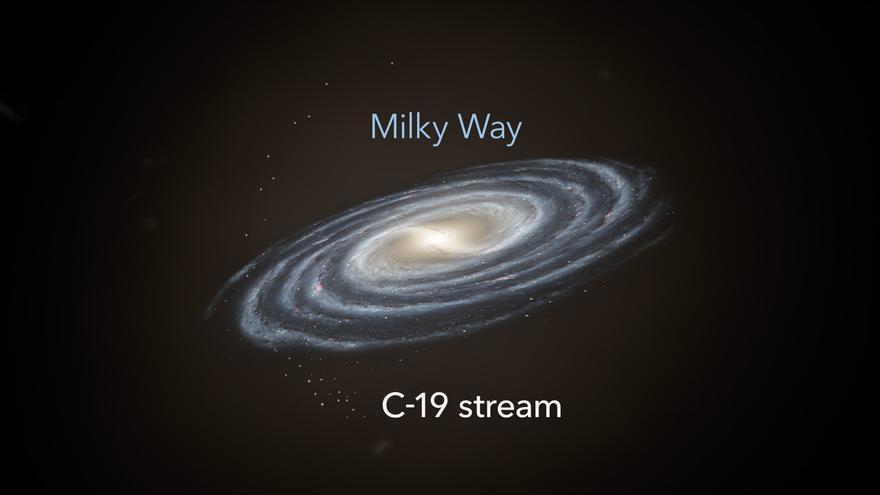 Astronomers have discovered on the fringes of the Milky Way a relic from the time when the first stars formed. They are globular clusters that contain the least metallic suns in the universe.

An international team of astronomers has discovered the remnant of the oldest globular cluster in the Milky Way and found that it is inhabited by the least metallic stars in the observable universe.

Globular clusters are groupings of stars, generally very old, found on the margins of galaxies.

In the case of the Milky Way, the now discovered globular clusters represent a relic from the time when the first stellar structures formed.

The most striking thing about the stars in this ancient globular cluster in the Milky Way is that they have an exceptionally low content of heavy elements.

The Sun is composed of 98.5% of two light atomic elements, hydrogen and helium, and 1.5% of other heavier elements, such as carbon, oxygen, iron. This ratio of heavy atoms, called “metallicity,” varies from star to star.

The rates of heavy elements discovered in the stars of the ancient globular clusters of the Milky Way are 2,500 times lower than those found in the Sun, and much lower also than those known in any other star in the Universe, the researchers note in a release of the Paris Observatory.

Until now, globular clusters with so few elements were not known to exist, making this a key discovery for understanding how stars formed in the early Universe.

In addition to questioning the current knowledge and models that do not consider that such stars exist, this discovery opens a direct and unique window on the first ages of star formation and on the establishment of stellar structures at this very remote moment in the history of the universe, they point out. researchers.

To study the first stellar structures to form in the Universe, astronomers can look at the most distant galaxies, or study the oldest structures in the Milky Way in great detail, a methodology called “galactic archeology.”

In the same way that archeology scrutinizes the past to find valuable objects that help to better understand ancient civilizations, astronomers inquire into the stars of the Milky Way.

What they want is to find some clue that helps us understand the first moments in the history of our galaxy, which formed immediately after the Big Bang, 13.6 billion years ago.

“The vast majority of the stars around us, like the Sun, were formed in our galaxy. However, a small fraction of the stars and clusters of the Milky Way, which are found in its surroundings, were brought from smaller galaxies ”, explains Jonay González, researcher at the Instituto de Astrofísica de Canarias and co-author of the article, in a release of the IAC.

Map of the globular clusters of the Milky Way superimposed on the map of the Milky Way obtained by the Gaia satellite. Each cluster is a grouping of thousands to millions of stars. The color of the symbols represents their “metallicity”, which corresponds to their fraction in heavy elements with respect to the Sun. N. Martin & Strasbourg Astronomical Observatory; Canada-France-Hawaii Telescope / Coelum; ESA / Gaia / DPAC.

And he adds: “the discovered cluster was possibly introduced in this way, but has been losing its stars in its orbit around the galaxy as a result of tidal stresses, leaving a ‘celestial footprint’ of stars.”

This study has gathered data from ESA’s GAIA satellite with observations made at the Gran Telescopio Canarias, installed at the Roque de los Muchachos Observatory (Garafía, La Palma), together with the CHFT and Gemini-Norte telescopes at the Mauna Observatory Kea (Hawaii).

This finding has also been possible thanks to data taken by the Gaia satellite mission of the European Space Agency (ESA) and the identification of primitive stars by the Pristine Survey, which is being carried out at the Canada-France-Hawaii Telescope. (CFHT), on Mauna Kea.

The team of researchers explored the map recorded by the Gaia satellite, using a novel algorithm to isolate these rare groupings of stars.

One of the structures discovered was the new stellar stream, which the team dubbed “C-19.” In parallel, the Pristine study, from Hawaii, had been mapping the sky to systematically measure the percentage of heavy elements in millions of stars.

The combination of these two studies revealed that C-19 contains stars with an extremely low fraction of heavy elements.

Follow-up observations with the Gemini North Telescope, in Hawaii, and the Gran Telescopio Canarias (GTC or Grantecan), on La Palma, also confirmed the globular cluster nature of the disturbed object, as well as the exceptionally low levels of heavy elements: so low as 0.04% of our Sun and well below any other known structure in the Universe.

“Observations at the Gran Telescopio Canarias have been key in confirming this primitive structure, identified by combining the maps of the Gaia mission and with observations at other telescopes on the ground,” comments Carlos Allende, IAC researcher and co-author of the article. “This discovery brings us closer to understanding the early stages of the Galaxy,” he concludes.