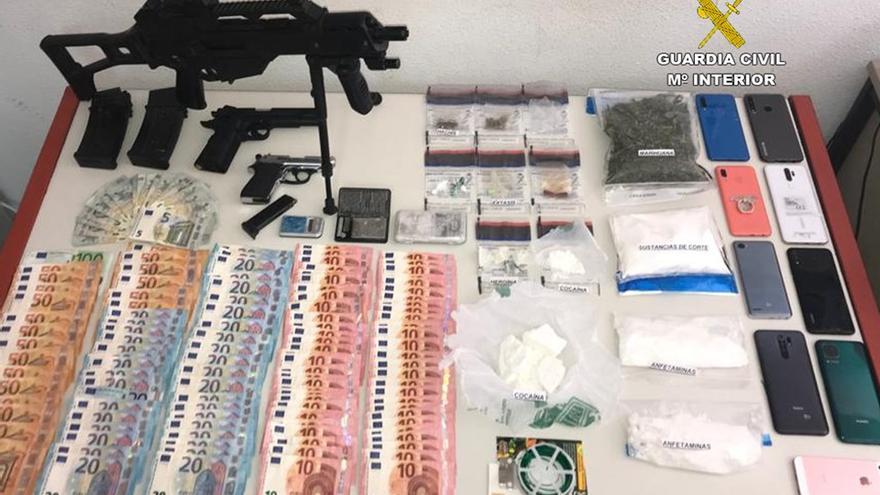 The Civil Guard of Alicante has arrested nine people, and investigated a tenth, members of a criminal group dedicated to the sale of cocaine, in the provinces of Alicante and Murcia.

The number of consumers who went daily to the three points of sale that have been dismantled, was very high, generating concern among residents of the area.

Last October 2020, Pilar de la Horadada Local Police officers, found more than 5,000 marijuana plants in a greenhouse near the Pinar de Campoverde residential complex in this municipality. The Pilar de la Horadada Investigation Area began investigations to clarify the facts. The agents then located the group: a criminal organization based in the provinces of Alicante and Murcia, perfectly hierarchical, and operating under a well-structured modus operandi.

They rented a greenhouse pretending to be a company dedicated to the buying and selling of vehicles. However, they installed a marijuana plantation.

They verified that the greenhouse had been rented from the owner, pretending to be a company dedicated to the purchase and sale of vehicles. However, they installed a marijuana plantation.

Shortly after the agents found out that the gang was not dedicated to the exclusive traffic of marijuana, on the contrary, its main business was that of cocaine, although they also distributed ecstasy, marijuana and hashish, which gave the researchers an idea of ​​the size of the group.

To circumvent the restrictions on movement on the roads, decreed by the Government, within the framework of the health situation generated by the pandemic, used vehicles in the name of a company, owned by one of the members, and provided those in charge of carrying false authorizations, with which claimed to circulate for work reasons in case of being required in one of the perimeter closure controls established by the different police forces.

Also, to avoid possible police investigation, used false identities with which they registered the telephone contracts with which they operated, and even to rent the premises where they carried out their criminal work. They also moved with different vehicles for the same purpose.

The agents identified the leader of the gang, whose main function in the organization was to obtain and guard the high purity drug. Since he did not have a driver’s license, he used two of the members, those he trusted the most, who were the ones who took him by car to the retail outlets, where other members of the gang cut the drugs and prepared the doses. , which they later distributed.

Once the Civil Guard had studied the structure of the organization and located all the members, the arrests began.

In the first phase, the agents searched two homes: one in Orihuela Costa and another in Torre Pacheco (Murcia), on December 11, in which they proceeded to the arrest of five of the alleged perpetrators and the investigation of a sixth person, related to the band. In this first phase, the leader was arrested in his home in Orihuela Costa. It was at this address that most of the drug was found.

The rest of the band, the other four members, were arrested between December 15, 16 and 28.

In the records, the agents intervened 150 grams of rock cocaine, with which the group could have prepared more than two thousand doses; 160 grams of amphetamine; 9 kilograms of marijuana buds (in addition to the 5,000 plants intervened by the Local Police and which started the investigation); large amount of cutting substance, possibly caffeine; a significant amount of material for the preparation and distribution of doses; various mobile phone devices; three vehicles used by the authors to carry out the criminal activity; a short firing-type weapon; two simulated weapons; and 2,500 euros divided into small bills, from the sale of the doses and to provide change to the sellers.

For the records, the Research Area of ​​Pilar de la Horadada, had the support of ROCA team from Torre Pacheco, Citizen Security patrols from the Main Post of Torrevieja and the Canine Guide specialist for drugs and money from the Alicante Command.

They are charged with the crimes of drug trafficking, cultivation or production of drugs, identity theft, and membership in a criminal organization.

They have been made available to the Orihuela Investigating Court, which has ordered the imprisonment of six of the authors. The rest have been released with charges.

With this operation, the Civil Guard of Pilar de la Horadada has dismantled three drug sales points distributed between the provinces of Alicante and Murcia, which supplied a large number of consumers.