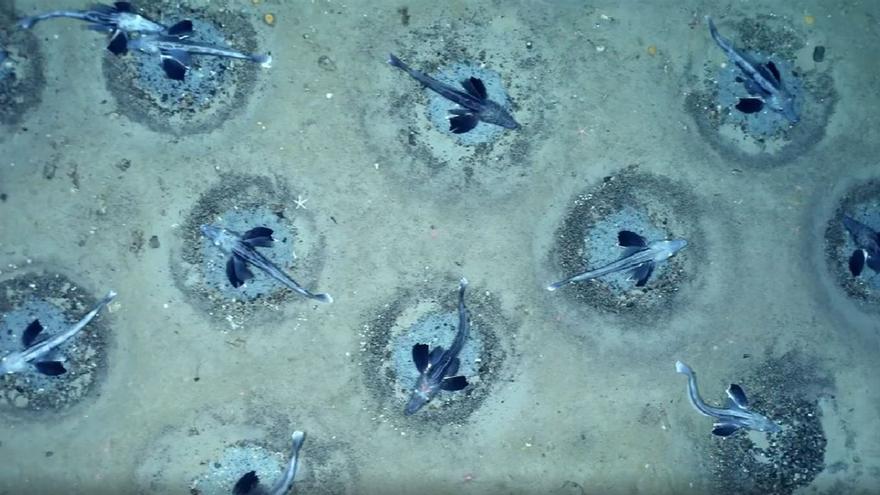 The largest and most densely populated fish breeding colony in the world hides deep in the ice of the Weddell Sea, east of the Antarctic Peninsula. There are 240 square kilometers (an area equivalent to about 34,000 football fields) of nests of Jonah’s icefish (Neopagetopsis ionah), regularly spaced, and each of them occupied by a single adult specimen and up to 2,100 eggs.

In total, about 60 million active nests. A unique ecosystem on the planet. Scientists have expressed their amazement at the finding, which they consider a new reason to create a marine protected area in the Weddell Sea, an idea that marine ecologists have been raising for six years with the intergovernmental treaty organization that regulates fishing in that Antarctic area.

The discovery was accidental. The ‘RV Polarstern’, a huge German research icebreaker, crossed the Weddell Sea ice last February to study life in that remote area of ​​the planet. While towing video cameras and other instruments half a kilometer deep, near the sea floor, the ship came across tens of thousands of 75-centimeter-wide nests.

“It was a really incredible sight,” recalls deep-sea biologist Autun Purser of the Alfred Wegener Institute, who led the underwater imaging of the ship.

Sonar revealed that the nests stretched for hundreds of meters, and high-resolution cameras captured the presence of more than 12,000 adult drakes and millions of eggs. One nest for every three square meters.

The fish, which reach up to 60 centimeters in length, are adapted to extreme cold: they produce antifreeze compounds and, thanks to the region’s oxygen-rich waters, are among the only vertebrates to have colorless, hemoglobin-free blood.

Researchers believe that adult icefish take advantage of currents to find suitable spawning grounds. They look for waters rich in zooplankton, which is the food for their young.

Adult icefish build circular nests in these areas by scraping the gravel and sand from the seafloor with their pelvic fins. Until now only a handful of scattered nests had been observed, very few and far between, before the voyage of the ‘RV Polarstern’.

The German ship’s team verified the existence of 16,160 fish nests close together, 76% of which were protected by solitary males.

Assuming a similar density of nests in the areas between the ship’s transects, researchers estimate that there are a total of around 60 million nests in the area, which cover an area of ​​about 240 square kilometers, whose benthic biomass, extremely high, about 60,000 tonsIt provides food for predators and scavengers. These fish and their eggs are therefore key players in the local ecosystem.

This belief is corroborated by the fact that the researchers observed numerous fish carcasses in and near the nesting colony, suggesting that drakes play an important role in the local food chain.

They suspect that the colony is largely used as a food source by predators such as Weddell seals (Leptonychotes weddellii).

“Many Weddell seals spend much of their time in close proximity to fish nests,” says Purser. “The nests are exactly where the warmest water emerges. It may be a coincidence, but the recorded data shows that the seals dive in the nesting areas, so it may well be feeding on these fish, ”he adds.

What’s more, Upon death, the carcasses of these fish provide a food source for benthic scavenging communities and probably also pelagic scavengers.. Abandoned nests were also observed in some areas, suggesting that the location of ideal nesting habitat may change over time or from year to year.

Scientists were especially interested in that area of ​​the seabed because they knew it included a upwelling of water two degrees Celsius warmer than the surrounding bottom waters. And they wanted to find out why. They now know that there is a spatial correlation between the modified upflow of warm deep water towards the Weddell Shelf and the active nesting area. The rest was “a total surprise,” adds Purser.

In their conclusions, the study authors note that further research expeditions to the southern Weddell Sea are required to delineate the full spatial extent of the icefish breeding colony, and to better understand the local and potentially regional importance of this “metropolisnesting site for the species, surrounding ecosystems, and other wildlife.

The finding, which has been published in the journal ‘Current Biology’, has come to overthrow a popular belief, that the greater the depth in the ocean, the scarcer is life. In fact, Balecher is convinced that there are “other areas beyond Antarctica that will host fantastic zoological finds”.

The investigation continues: Scientists have left cameras and lights strung over one of the densest parts of the colony to learn more about the drake’s breeding and nesting behaviors. They hope to recover the material in 2023. Before that, in April of this year, they will return to the Weddell Sea to carry out further studies.

The Weddell Sea, a unique and largely intact ecosystem, is already protected from the practice of bottom trawling, which scientists consider “destructive”. But the study authors call for even more safeguards for this “critical ecological point”. It covers an area of ​​2.8 million square kilometers and in the southern sector is the second largest ice shelf in the world, the Filchner-Ronne, with an area of ​​430,000 square kilometers.

“We believe that our discovery supports efforts to protect the Weddell Sea from anthropogenic impacts, establishing a regional marine protected area under the Southern Ocean under the umbrella of the Convention on the Conservation of Antarctic Marine Living Resources (CCAMLR)”, the authors conclude.