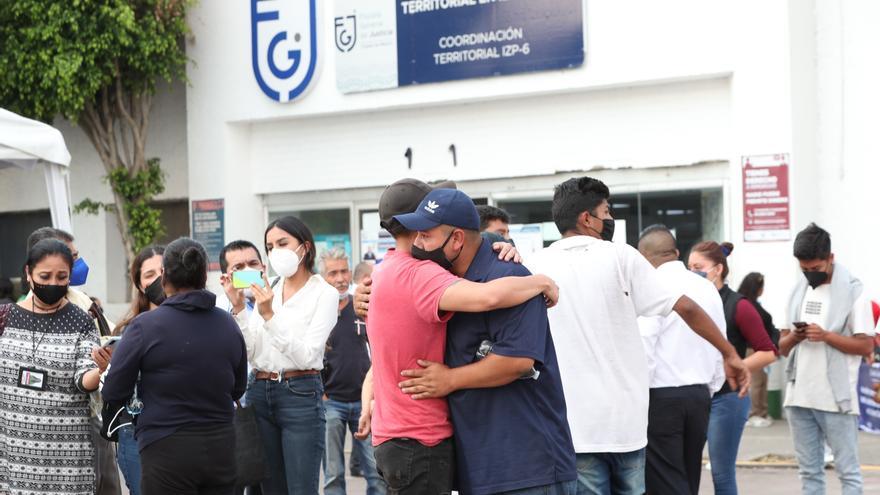 The missing 13-year-old boy after the collapse yesterday of a section of the metro in Mexico City, he was found dead this Tuesday in a morgue in the east of the city, confirmed the local Attorney General’s Office.

Brandon Giovanny Hernández Tapia, reported as missing, “was identified by family members in the forensic offices of the institution in the Iztapalapa mayor’s office, who died due to the events that occurred on Line 12 of the Metro,” the capital prosecutor’s office reported on Twitter. Hours before, the same entity had issued an alert to locate the minor after the accident on a section of Line 12 of the metro in the Mexican capital, which so far leaves at least 24 dead. In a statement, the Prosecutor’s Office reported that, following a citizen complaint, it applied search protocols to locate the child.

The #FGJCDMX regrets to inform that the minor Brandon Giovanny, reported as missing, was identified by relatives in IZP-6, who died due to the events that occurred on line 12 of the @MetroCDMX

The child’s mother, Marisol Tapia, said on Tuesday morning that the boy lost communication with his family shortly before the crash. “They do not provide me with the list of dead and I want to know if my son is dead,” the desperate woman demanded this Tuesday, before the media, while she was looking at the scene of the accident for someone to offer her information. The mother said that she found the boy’s father in serious condition in a hospital and that she had searched for the minor in all medical centers but could not find him and that led to her complaint.

The accident occurred on Monday at 22.22 hours (03.22 GMT on Tuesday) when a beam of an elevated bridge of Line 12, between Olivos and Tezonco stations, in the east of the capital, gave way, causing the fall of a train with passengers that was stranded in a “V” shape.

The images of the collapse of the bridge, which fell on cars driving down the street, shocked the country in the greatest tragedy in the capital since the earthquake of September 19, 2017. So far the balance of the tragedy is at least 24 dead, 10 of them identified, and 79 people injured, 15 of which are still hospitalized, some seriously.

Gisela Rioja’s husband went to work on Monday and never returned. After an endless night of searching in the place where part of Line 12 of the Mexico City subway collapsed and after asking several hospitals in the area, Gisela found it where she did not want to find it, in the morgue. “I do want justice, because my husband did not deserve this,” she told EFE, heartbroken, hours after identifying the body and waiting for it to be handed over to her.

Like her, dozens of people spent the day at the doors of the forensic offices of the Mexico City Prosecutor’s Office in Iztapalapa, east of the capital, waiting to receive the worst news: that their missing relative was one of the 24 killed in the accident. By droppers, they were entering the unit to identify the bodies and later they waited in a large tent for the eternal procedures for the delivery of the corpses to be completed, some with waits of more than ten hours. According to the latest report from the Prosecutor’s Office, only 10 of the 24 dead had been identified.

Gisela, who reported having received a “terrible attitude” in all the places she went, is convinced that the local government knew that the line that her husband took every day was not in good condition. “As they did not give me reports in any hospital, I came here and the truth is not valid. It is assumed that the Government already knew. (…) I think this is a crime and I ask for justice,” he said.

Pilgrimage to find the bodies

Most of the 24 dead and 79 injured were working people who were returning home after a long day’s work, such as José Luis’s sister-in-law, who died at 37 years of age. “Since last night we learned that it was the line she used to get to her home. We started to tie up conjectures and we got to the moment when she did not answer the phone and we began the search at night through the hospitals,” José Luis told EFE while his brother was doing the procedures to recover the body. As a result of the “pilgrimage” through hospitals, this family had only slept two hours and now had to face “cumbersome procedures”.

The head of Government of Mexico City, Claudia Sheinbaum, reported that the Norwegian company Det Norske Veritas will investigate what happened and announced funeral aid for families, but José Luis warned that “not even with all the money in the world they contribute” will to be able to recover the truncated lives.

Line 12 of the metro, inaugurated in 2012 by the then mayor and current Secretary of Foreign Affairs, Marcelo Ebrard, has been shrouded in controversy from the start. The train that promised to connect the poor neighborhoods in the south of the capital It ended up costing much more than what was promised and between 2014 and 2015, part of its operations were suspended due to numerous failures. In addition, the residents of the area had been denouncing serious damage to the bridge elevated of the so-called golden line since the strong earthquake of 2017.

Also Read  FIFA was sued and must pay $ 120 million dollars to the Argentine who created the aerosol 9.15

One of the relatives who was waiting at the door of the Prosecutor’s Office explained to EFE that on that line suddenly “the subway stopped and gave good braking.” “The truth was a catastrophe, it is a pity that we have that type of rulers,” he lamented when remembering his nephew, who died at 29 years of age. “They cut him off for a lifetime,” he sighed.