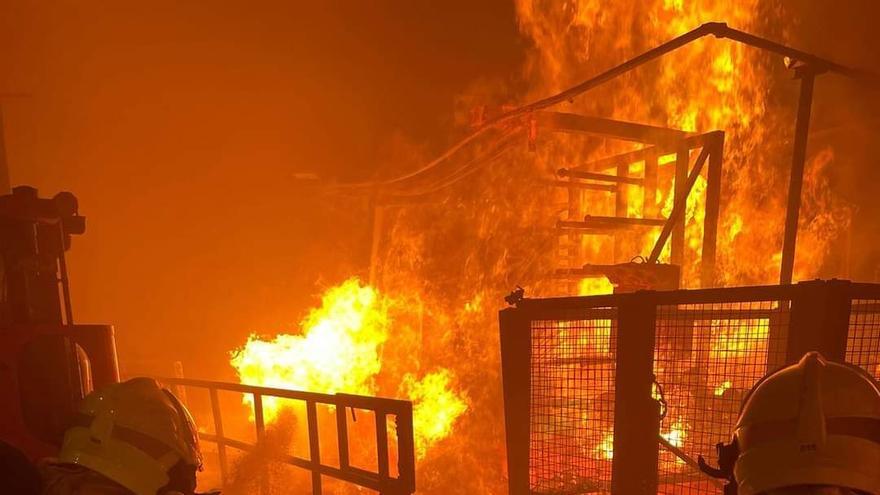 This fire has been very complicated due to the high thermal load, and the danger posed by the thousands of liters of burning oil. The firefighters have managed to control this virulent fire with foam, which has generated a 12 meter high flare from the tank, preventing its spread to other tanks. The area has been closed until technicians review the entire structure that has been greatly affected by high temperatures and fire.

In the extensive operation deployed, a Command Post has been set up with more than 35 firefighters SPEIS, Alicante Local Police and National Police that were mobilized to coordinate the emergency, and the industrial building was evicted.

The SPEIS received the notice at 3.25 am, and seven full crews from the City Council traveled to the site of the industrial fire, upon arrival they verified that the fire was protruding from the deck with a flare of more than 12 meters high, and to intervene they divided into five teams to start attacking the fire from the top.

The firefighters have highlighted that this fire has been very difficult to extinguish due to the high thermal load, and the danger posed by having tanks with thousands of liters of burning oil.

The SPEIS teams immediately began to extinguish it, deploying the foam distributed and intervening from several fronts inside the affected area, and from the highest part that could be accessed by working from the outside with the ladder vehicle divided with different attack shafts to control it as quickly as possible and prevent it from spreading to other tanks.

The firefighters, after more than four hours of extinguishing work from various fronts, managed to control it at around 7.30 am with the foam, and an hour later it was considered extinguished, but due to the high thermal load you have to be cooling and cooling the area throughout the day.

Also in the part of the cover the firefighters have had to carry out an inspection with the arm of the ladder vehicle together with several technicians reviewing the structure, since it has been totally affected, and the ship has been closed until it is verified that there is no risk of collapse.

The Security Councilor, José Ramón González, has congratulated the SPEIS firefighters for their “effective extinction of the complicated fire this morning, and the excellent operation organized with an intervention that has managed to control and extinguish the fire very quickly avoiding major damages “, thanking them” for the great work done in this industrial fire. ”

According to firefighters the fire was declared by unknown reasons between two oil tanks, the area of ​​the ship has been totally affected, as well as the deck, and several teams and reinforcements have been replaced to work intensely in the extinction, and a checkpoint will be maintained preventively working all day cooling the affected area to avoid any new outbreak, and it is expected that by the end of the day the operation can be withdrawn.

The Local Police have cut off access to traffic on Avenida de Elche, and also controlled the emergency by moving four patrols to carry out the eviction, guiding the fire engines, and coordinating the emergency.