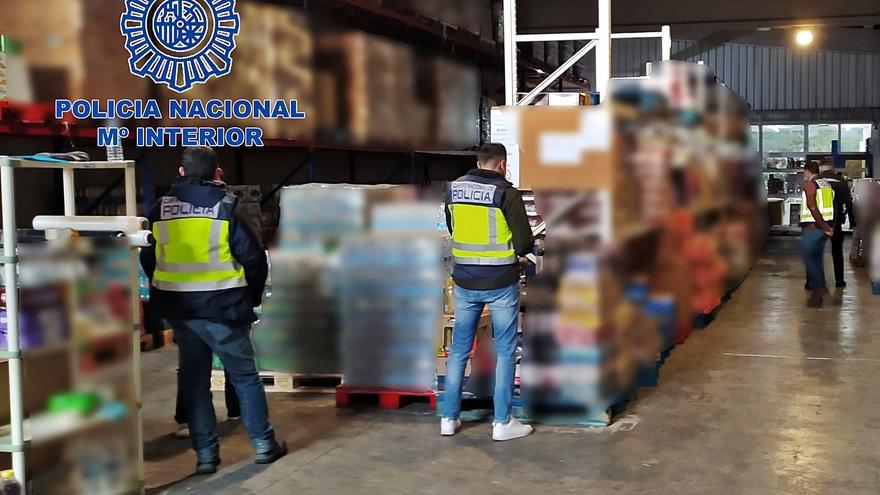 In addition to the immobilization of the merchandise, the Police detained three workers Pakistani nationals who were on the ships and are in an irregular situation in Spain. The plot acquired the merchandise outside the country at a price lower than the market price because it was about to expire and then they changed the date to sell them in the province for a higher amount and obtain greater benefits.

The investigation continues to determine whether the couple who own the companies have committed crimes against the rights of workers and against the Public Treasury.

The police operation was started at the end of last year by Group 5 of the Judicial Police of the Benidorm Police Station. The alarm came on the one hand to the Citizen Participation delegation of the police station, where a notice was received that a distributor was selling products with the expiration date of a well-known soft drink brand and another of chocolates.

The National Police also received several reports from the Benidorm Local Police that confirmed these suspicions, since they had detected expired products that were for sale in nine establishments and had immobilized them.

The Judicial Police carried out their investigations to determine the origin of the fraudulent merchandise and the agents established surveillance and monitoring devices to find out which company was supplying the products to merchants in Benidorm.

In this way they reached an industrial warehouse located in La Nucía and when investigating the company they discovered that there were four merchants and that they had two more warehouses in the same industrial estate. The merchandise arrived at the ships from countries like Romania, Poland and Turkey.

Thanks to the collaboration of the City Council of La Nucía, it was found that the ships were operating without being registered or having authorization for the activity they provided.

Once all the information on those responsible for the distribution was available, the Benidorm National Police organized an operation in which agents from the Generalitat Police, La Nucía Local Police, and personnel from the Alicante Labor Inspectorate also participated. and of Public Health of Benidorm and civil servants of Urbanism of La Nucía.

They proceeded to inspect the three ships and immobilized more than half a million of some well-known chocolate sweets and carbonated drinks from a prestigious brand of soft drinks. They also opened several disciplinary proceedings that can end in fines of more than 120,000 euros.

According to the police, the employees erased the expiration dates with solvent and then added the new one with an industrial screen printer or with a sticker. Finally they packaged the products with another industrial machine to give a legal appearance.