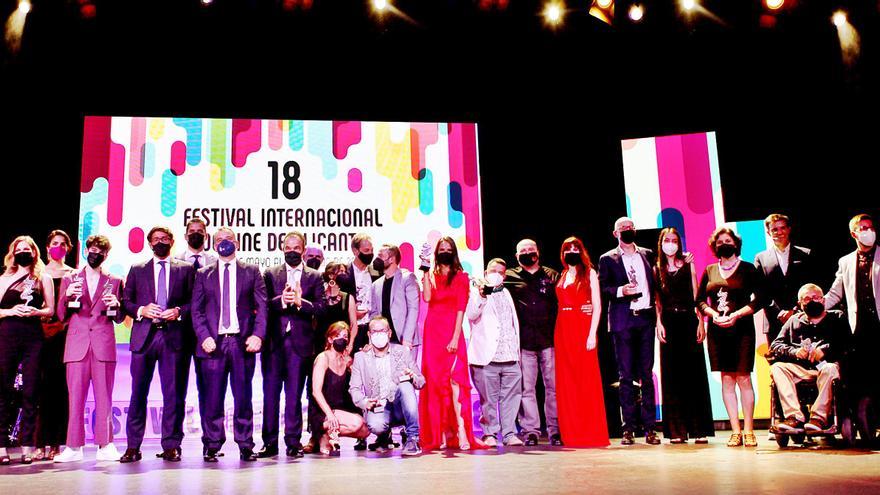 A group of friends who the death of one of them puts the batteries to do everything they wanted in their day is the story behind Things to do before you die, the film by the Valencians Cristina Fernández and Miguel Llorens that yesterday swept the Alicante Film Festival with a Tesela de Oro and with three other awards: best director, best screenplay and the “Sergio Balseyro” audience and critics award for best film. Virginia de Morata won the Tesela de Plata for best actress for La mancha negra. And the Silver Tesela for best actor went to Jorge Motos for Lucas, a feature film for which Jon D. Domínguez was also awarded the Silver Tesela for best photography.

The winners of the Tesela de Oro for the best film for Coses a fer abans de muerte. | INFORMATION

Sam’s death invites his friends not to forget the aspirations they had during their youth. All during a weekend in which feelings, passions and secrets will surface. Coses a fer abans de muerte, shot in the Valencian language, allowed its protagonists to take the stage on numerous occasions. “It is an ode to friendship, therefore I cannot thank more to all the friends who have passed through my life,” said Cristina Fernández Pintado, co-director of the feature film together with Miguel Llorens, who wanted to value the support of institutions. Lorena Torres, producer of the film, in turn thanked the feedback and the warmth received. “We’re going to fly home,” he said.

On the other hand, the piece by Óscar Bernàcer, Stanbrook, was the great winner in the short film category. His work won the Best Short Film Award, endowed with € 1,000 and access to the Goya Awards. In addition, Bernàcer received the Best Director Award, and Àngel Fígols, for his role in the short, was awarded the Best Actor Award. The work, shot in Valencia, shows the suffering of the thousands of civilians who crowded the esplanade of the port of Alicante at the end of the Spanish Civil War to get on Captain Archibald Dickson’s ship.

“I think last Thursday’s screening was the most special we’ve been to with this short,” Bernàcer explained. “I think it is good that we do this exercise in collective memory, that we do not forget what has happened or is happening and that we seek solutions in a global way,” added the director, who dedicated the award to all the families who boarded the ship, to his captain and his team.

Awarded for Before the eruption. | ALEX DOMÍNGUEZ

Vicente Seva, director of the festival, highlighted the value of the reunion of both old friends as with movie theaters after a year with the barriers of the pandemic.

The Principal Theater of Alicante hosted the closing gala of the XVIII edition of the Film Festival. | ALEX DOMÍNGUEZ

This closing gala, held at the Teatro Principal and presented by Luis Larrodera, received different artists on the stage, among which the emotion of a young man stood out. Jorge Motos after receiving the Silver Tesela for the best actor. “Thanks Alex for writing this story, it has been the ride of my life,” said Motos. The Music for Image Award went to Oscar Navarro, and the Valencian Audiovisual Academy took advantage of the meeting to deliver the awards to its first three honorary academics: the actors Juli Mira, Empar Ferrer and the Alicante director, Cecilia Bartolomé.