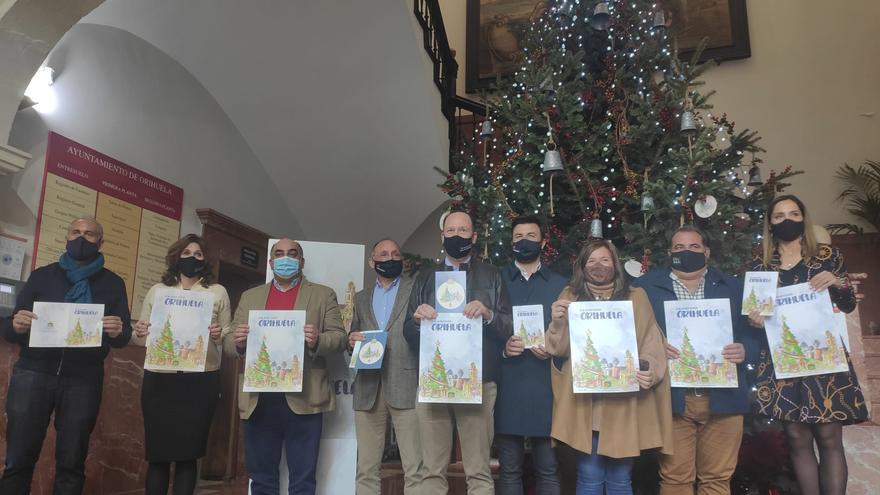 The mayor of Orihuela, Emilio Bascuñana, together with the councilors of the Government Team, presented the Christmas 2020 campaign this Thursday. The Councilor for Communication, Rafael Almagro, has been in charge of explaining this year’s campaign, highlighting that “We assume that these Christmases are very different from what we were used to. In this program, we have put safety first ”.

Likewise, the motto chosen for this year is “At Christmas, Orihuela”, “Because we want Oriolanos to stay here this Christmas, to buy in our shops, to participate in this program and to avoid mobility as much as possible on these key days in order to have a safe Christmas.” Almagro thanked the Department of Festivities, Culture and Youth, Commerce and Rural Development, “the effort they have made in recent weeks to be able to program these activities, guaranteeing capacity, access and security at all times ”.

Rafael Almagro has ensured that all the information regarding the Christmas program will be available on the web www.orihuela.es/navidad2020, and on the social networks of the Orihuela City Council. Likewise, he recalled that the programmed activities are subject to changes due to the sanitary restrictions that may be implemented during these days.

The image of the campaign

The image of the 2020 Christmas campaign is the work of the Oriolan artist Rate Bas, who has explained that his illustration “This time it expands the target audience to which it is directed, both parents and children, staging the message that each parent wants to give their children at these very different parties.” The Rate Bas illustration started for the Mayor of Orihuela’s Christmas greeting and has finally also been the protagonist of the municipal Christmas campaign.

The mayor of Festivities, Mariola Rocamora, has been in charge of announcing the static receptions planned for Santa Claus and the Three Kings. “The first of them will be on December 23 from 11:00 a.m. to 2:00 p.m. and from 4:00 p.m. to 9:00 p.m., by appointment, while the second will be on January 5, at the same time.” Both static receptions will take place in the Gabriel Miró Glorieta. In addition, the Department of Festivities has enabled the following telephone numbers to request the prior appointment: 96-530-46-45 / 96-530-27-47 (from Monday to Friday), or by WhatsApp on the phone 673-83 -63-85 (Monday to Sunday). Rocamora has also highlighted that “The Municipal Nativity Scene has been very well received since its opening and we hope that in the coming days Oriolanos and visitors will continue to discover this very special tradition.”

Among the activities of this year’s program there are also two photocall of the Department of Tourism, which is also directed by the mayor Mariola Rocamora, located in the Plaza de la Soledad (Snowball and letters of Orihuela History of the Mediterranean), so what “Whoever takes a picture of them and labels the council will receive an award.”

On the other hand, Tourism will set up mailboxes so that children can leave their letters to Santa Claus and the Three Wise Men, both at the Tourist Office in the center of Orihuela, and at the Costa Tourism Office. In addition, it has planned different routes for the month of December that can be consulted on the website www.orihuelaturística.com, and that complement this program.

For his part, the Councilor for Commerce, Víctor Bernabéu has indicated that this year’s activities organized by this area “They are focused on the animation of shopping streets, with music, surprises and animation, which Oriolanos will find when they are shopping these days.” The Oriolano mayor has stated that “We have distributed more than 300 rugs and we have decorated shop windows to put a smile on the shops.” Bernabéu has also announced that on December 24 and January 5 gifts will be distributed on scooters through the shopping streets.

The Councilor for Culture and Youth, (during the removal of the mayor Mar Ezcurra), José Aix, has advanced the activities organized from these areas, and which begin this weekend until January 4, with children’s workshops, Christmas concerts (free admission), puppets, storytelling, Christmas workshops … all these activities will take place in La Lonja, in the Teatro Circo Atanasio Die and in the Auditorium of San Bartolomé. Thus, the Oriolano mayor has stated that “Culture in Orihuela is safe, and at Christmas it will be more so, so we have adapted the programming to the current situation, guaranteeing security measures at all times, as has been the case with the acquisition of special masks for wind instruments or purifiers of air for closed spaces ”.

Aix has especially highlighted that on Tuesday, December 22 at 12.00, the opening of the temporary exhibition of works from the Nativity Scene Techniques workshop by Manuel Zambrana (which will remain open until January 10), and which will be located in the Santo Sepulcro Cultural Center (Museo del Belén).

Finally, the mayor of Orihuela, Emilio Bascuñana, has been in charge of closing this presentation and has stated “Our commitment from the City Council so that these dates can be celebrated taking into account the circumstances, with greater responsibility on the part of all”.

In addition, Bascuñana has highlighted “The effort of the councils to adapt their activities to the current restrictions”, while he has also invited “Oriolanos and visitors to enjoy Orihuela at Christmas.” To conclude, the Oriolano mayor thanked the artist Rate Bas for his work with the illustration that stars in this year’s campaign “And that gives us hope for the next parties.”