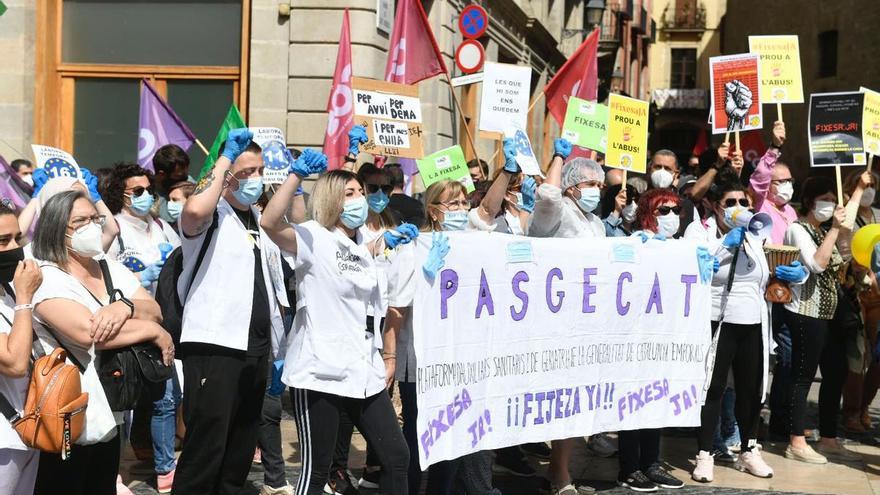 Compensation after losing the place

The royal decree validated by Congress incorporates as its main novelty the right to compensation for all those interim, whether of the body of officials, labor or statutory personnel. This compensation will be 20 days per year worked, with a maximum of 12 monthly payments. This amount is the equivalent of the objective dismissal in the private sector, after the last reduction introduced by the PP in its 2012 labor reform.

What requirements are essential to collect it?

For the collection of compensation, only the age of the last position occupied by the interim will be taken into account.. That is, if you have been in one position for two years, but had previously been in another for five years, you will only be compensated for the last employment relationship. And provided that this relationship has been continued. That is, if you work one year, you are laid off and then you return to the same position, only this last period will be taken into account.

Were there compensation before?

No, up to now the right to compensation was limited only to labor personnel and if they had previously been classified as ‘indefinite not fixed’; which recognized a situation of abuse of the previous temporality. Acting officials and statutory statutory staff (mainly health) were not entitled to it; as confirmed by the Supreme Court in a recent ruling.

Do you recognize fixity?

No, the royal decree does not recognize the fixity for those interim who can demonstrate that they have been victims of the abuse of temporality. No matter how much a worker may have been, for example, 15 years in the same position, the royal decree does not automatically make it indefinite and grants him the position. This is what the organized interim platforms intended, but this route was initially ruled out by the Government. However, this point has many numbers to change after its passage through Congress. The Minister of Finance and Public Function, María Jesús Montero, proposed granting that fixity to those interim officials who have been in the same position for 10 years or more, provided that an opposition has not been called during all that time to try to consolidate it.

Another novelty that the royal decree incorporates is that An intern may not be more than three years occupying the same position. If a temporary worker exceeds this period, the responsible administration will have the obligation to terminate him automatically. if you do not want to be incurring an irregularity. And the regional manager will have to answer for it. An agency may only authorize interns in three cases: that a position is vacant and awaiting the official who gets that opposition, due to a temporary work peak or to attend a temporary program. And the interim staff will only be able to remain in their position until the opposition process is completed and it is occupied, when that peak of work or the program to which it is associated ends.

The agreement incorporates a modification on the opposition processes. Until now, each year the Government set a replacement rate, which took into account how many public employees were retiring, how many were needed to replace them and how many more positions were taken either to stabilize eventuals, or for internal promotion or for geographical mobility. Now an additional rate is incorporated for stabilization, which will allow the Administration to take as many places as it wants without being limited by that relationship between employees who leave and those who enter. The objective stated in public by the Executive is to remove 310,000 places for stabilization before 2025.

The royal decree validated by Congress incorporates a series of measures that seek to reinforce control over those responsible for the administration and that they comply with the content of the norm. And thus avoid that the high interim bags continue to be fed, which despite being already illegal before the approval of the regulation, persisted due to the lack of control and penalization measures. In addition to the lack of competitive competitions called in recent years.

“Irregular actions in this matter will give rise to the requirement of the responsibilities that proceed in accordance with the regulations in force in each of the Public Administrations”, reads the royal decree. What will this translate to? The lack of specificity is one of the criticisms that the Government has received about this reform, since the detractors consider that it is not sufficiently explicit and can leave the responsible managers without sufficient penalties. In fact, the main penalty is the cost of compensation, which will be in charge of the competent administration and the older the interim, the greater the cost to the public treasury.

What can the parties change?

Technically everything. Now the political parties with representation in Congress will propose their amendments and these will be put to a vote. Which means that they can propose novelties, changes or deletions that substantially alter the content of the royal decree. There are some, however, that have already been raised publicly by the parties. Montero raised the one to recognize the fixity to the temporary ones with more than 10 years of permanence in the same place, as long as no opposition to it has been opened in that time.

Another possible novelty, on which the parties will have to vote again, will be that the opposition phase could not be eliminatory, if the autonomous communities that convene the processes so decide. This last point indirectly raises the weight of experience, since it prevents an intern from being left out of the process if he fails one of the tests of the theoretical opposition process.