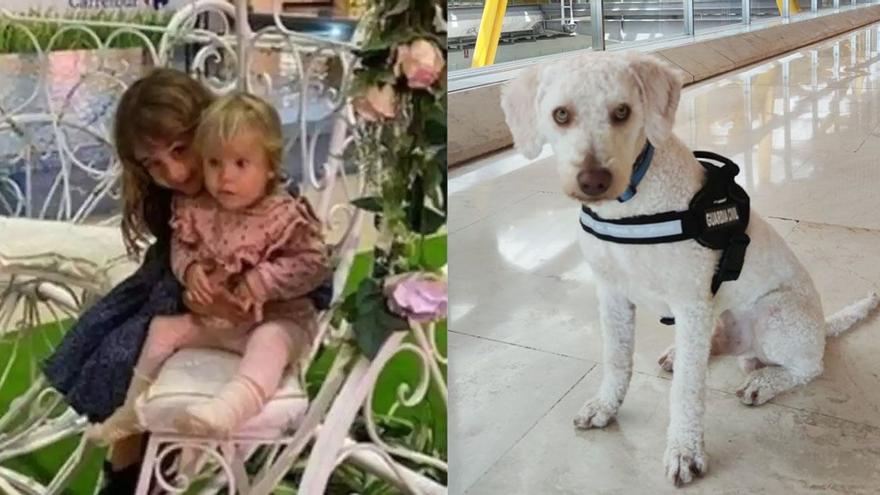 Sunday night arrived by plane together with his human guide to Santa Cruz de Tenerife to help in the search for any clue about the fate of Olivia and Anna Gimeno Zimmermann, the two girls who were kidnapped by their father Tomás on April 27. Yesterday and today, Junco and his partner Bill, a three-year-old Belgian shepherd, They search the father’s house, his car, and his boat for any trace of blood, bones, or fluids from the two girls.

Junco and four other K-9 agents are part of that specialized unit, created in 2006 in the Civil Guard in imitation of the one that already existed in Switzerland. They are part of the Cynological Service, made up of some 500 expert dogs in detect drugs, explosives or rescue of living people.

As their brother Dylan, A companion in his unit, Junco arrived at the Civil Guard from the quarry in a local policeman from San Fernando (Cádiz) that detects and educates this type of dog in a selfless way. The rest of the five specialized agents are Ator and the only female, Xena, Named in honor of the warrior princess from the television series.

Several of them habitually live at the unit’s headquarters, located in El Pardo (Madrid), where the puppies are also trained to become future canine agents. Others, like Junco or his brother Dylan, are more privileged and live with their guides, with their families.

Their work is so essential that, for example, Junco has traveled on the plane to the Canary Islands next to your guide, to avoid possible colds if you traveled in the winery. These nights also sleep with the guide in a hotel in Santa Cruz de Tenerife. Bill, more veteran, sleeps in the facilities of the Civil Guard in La Laguna. To prevent them from being indisposed, their guides They only give them bottled mineral water to drink. To eat, they receive one of the best foodstuffs in Europe.

With the help of their guides, Bill and Junco yesterday began to work on the farm of Tomás Gimeno, the last place where it is known with certainty that the two girls were alive. A neighbor has stated that she heard them play there at around eight o’clock in the afternoon on April 27. Ninety minutes later, the father arrived at the Marina Tenerife port with two packages and a suitcase that he will load onto his boat. The images and witnesses do not give a trace of the young.

The first Spanish dog specialized in the detection of biological remains was Elton, a Belgian Shepherd who is a myth in the Cynological Service of the Civil Guard. “It is like Di Stéfano for Madrid or Cruyff for Barça. Elton marked the path of those who have come after, “they emphasize. One of Elton’s last services before retiring was to mark the well where Diana Quer’s murderer said that he had shot the young woman. It was the fourth different place. The three previous times he had lied, but Elton marked the well and the divers went there to rescue the body of the young woman from Madrid.

After Elton (named after Elton John) arrived Marley (by Rastafarian singer), a young spaniel who did brilliant services and died of a heart attack. Behind them, Bill, Actor, Brothers Dylan (another brilliant Bob) and Junco and the female of the group, Xena. They have participated in cases as yet without trial as the crime of Professor Laura Luelmo, that of Manuela Chavero and the disappearance of the young woman Marta Calvo in Valencia

Also Read  Elections 2021: Peru goes to the polls without a clear favorite | International

These canine agents are capable of detecting biological remains, bones, fluids and even nails up to five years after the event. In the crime of Javier Ardines, the councilman murdered in Llanes (Asturias) they detected pepper spray remnants which were key to finding the hitmen accused of the crime. The two specialists who are in Tenerife were the ones who detected blood traces of the disappeared young Valencian Marta Calvo months ago in one of the apartments of the accused of his disappearance, Juan Ignacio Palma.

The protocol of action with canine agents indicates that first one of them must enter, with his guide, to inspect each room or area. When that animal ends up in a room, his partner comes in to check his work. If they detect or extract an odor, they must be totally still, without touching anything, very close to the source. Then his guide pulls the strap towards him, to make sure of the firmness of that positive. If the dog remains firm, immovable, other civil guards are notified of ocular inspections so that they can photograph the place indicated by the K-9. His nose has served to help solve dozens of cases. When they do, their bosses give them a toy, almost always a rolling pin.