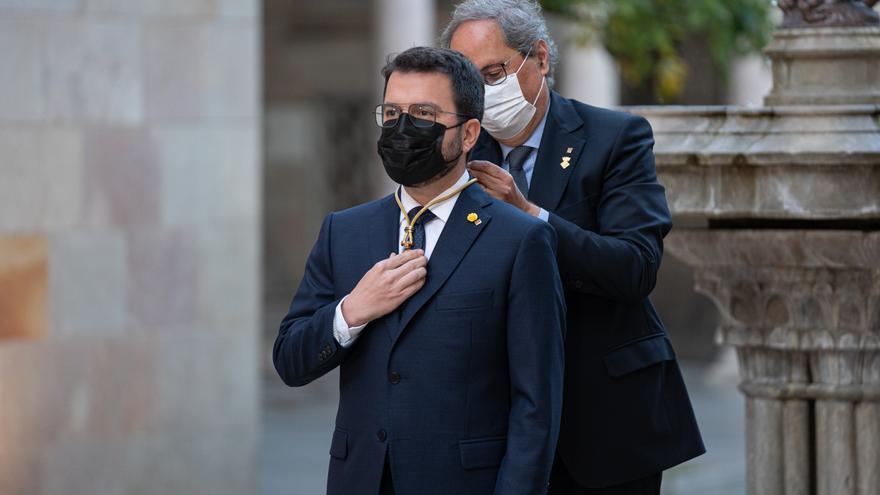 The new Government of Pere Aragonés (38 years old) boasts the youngest president of the modern Generalitat, since rejuvenates up to an average of 47 years. With 8 women and 6 men who will take office this Wednesday, the 14 councilors present a more technical profile.

These are the new councilors of the Generalitat of Catalonia, a cabinet in which only two repeat, Jordi Puigneró -new strongman of JxCat upon ascending to vice-presidency- and Teresa Jordà, Republican that strengthens its portfolio of Agriculture with Climate Action.

Born in Sant Cugat del Vallès (1974), he comes from the independence branch of Convergència and is part of the circle of trust of former president Carles Puigdemont. During his time as Minister of Digital Policies, this engineer promoted the launch of the first nanosatellite of the Generalitat, the deployment of fiber optics and the first steps of 5G. He dealt with the cyberattack on the Generalitat for the sovereign consultation of 9N.

It appears in the summary of the “Volhov case” since the Civil Guard believes that it supported a cryptocurrency project to give financial stability to Catalonia and divert funds to Waterloo. Some of his phrases on Twitter are controversial, such as the one he made in 2012 to coincide with the London Olympics: “Do you know the difference between a Spaniard and a Mongol? A medal.”

Laura Vilagrà (Santpedor, Barcelona, ​​1976) is a political scientist with many years of activism in ERC who was mayor of Santpedor between 2003 and 2015 and a deputy of the Parliament between 2006 and 2011. Person very close to Aragonès -was number two on his list in On 14F- and with a dialogue and negotiating profile, Vilagrà had not been so far in the forefront of Catalan politics until now.

Born in Badalona (1964), he is known in the business world for having been the general director of the La Caixa Banking Foundation between 2014 and 2019, after passing through Gas Natural, Repsol and CaixaBank.

With a degree in Information Sciences from the University of Navarra and a diploma in Business Administration and Management from Esade, he came to the fore in the past elections at FC Barcelona because he was supposed to be Joan Laporta’s economic vice-president, but he finally announced that he would not be part of the new board of directors “for professional reasons.”

Joan Ignasi Elena (Barcelona, ​​1968), lawyer, former mayor of Vilanova i la Geltrú (Barcelona) and former PSC deputy in Parliament, is well regarded at ERC headquarters after having approached the party during the independence process and having legally helped to the prisoners of 1-O.

He presided over the Socialist Youth of Catalonia in the 90s and was a socialist deputy in the Parliament on two occasions, always representing the sovereign wing of the PSC, until the acceleration of the procés led him to reconsider his militancy.

Dr. Josep Maria Argimon (Barcelona, ​​1958) studied at the Autonomous University of Barcelona and specialized in preventive medicine and public health at the Bellvitge University Hospital, in addition to studying various studies abroad.

He is the face of the management of the pandemic since he assumed the Secretary of Public Health last July, at the suggestion of then-president Quim Torra. His election has not been a surprise after the Health portfolio has gone from ERC to JxCat and that this formation has already advanced its designation in the electoral campaign.

Born in Lleida (1972), he was until now the general director of Public Centers and president of the Barcelona Education Consortium and has been the architect of keeping schools open during the pandemic.

Born in Barcelona (1983) and former delegate of the Generalitat in the US and Canada, she is the young and independent profile chosen by JxCat to assume the command of a department that has seen four councilors pass in four years.

Born in Sarrià de Ter (Girona) in 1979, Torrent was president of the Parliament in the last legislature, in which he certified the transition from the independence movement from the disobedience of 2017 to a tactical retreat, not shared by the JxCat sectors that support the route unilateral.

With a degree in Political Science from the UAB, a master’s degree in territorial and urban studies from the UPC and the UPF, Torrent has also been mayor of his municipality, deputy of ERC in the Parliament since 2012 and deputy spokesperson of JxSí in the legislature of October 1 .

Born in Reus (Tarragona) in 1971 and graduated in Law from the UAB in 1994, she has practiced as a lawyer specialized in civil and commercial law until 2011. She was a deputy in Congress between 2011 and 2019 and is the current spokesperson for JxCat in the City Council of Sabadell (Barcelona).

Born in Sant Cugat del Vallès (Barcelona) in 1969, she has served as director of services for the Department of Vice-presidency and Economy and Finance of the Catalan government and is one of the 29 positions of the Government prosecuted for participating in the preparations for 1-O.

Born in Ripoll (Girona) in 1972, Jordà has a degree in Modern and Contemporary History from the UAB and is one of the two members of the Government of Quim Torra that will continue in the executive. At the age of 27, she was already a councilor in Ripoll and then she was mayor for eight years and a deputy in Congress for another six.

Born in Reus (1978), she is a professor in Political and Social Sciences at Pompeu Fabra University and a former member of the 1-O electoral syndicate – she was acquitted. It will occupy a newly created portfolio.

Born in Girona (1979), she presents a meteoric career in politics. In November 2017, in full preparation for the exceptional electoral appointment with article 155 of the Constitution in Catalonia, the then vice-rector of the University of Girona was anointed by Puigdemont as an electoral poster for Girona.

Linked to the university world, Geis has a doctorate in law, with a European mention, from the University of Girona, where she also graduated in law in 2002, and completed a master’s degree in legal practice at the Barcelona Bar Association.