Everyone who watches This Is Us with any regularity knows that Rebecca Pearson has been diagnosed with Alzheimer’s Disease and likely will be dead by the end of the show’s current, and final, season. But that knowledge can be difficult to reconcile, given how gently the disease has crept into the Pearson matriarch’s life so far.

Aside from the very scary incident in which a disoriented Rebecca couldn’t find her way back to the cabin on The Big 3’s 40th birthday, her memory loss and mental degradation have existed mainly as a sad undercurrent, and not a game-changing development, in the show’s final season. That’s not a criticism, by the way: It’s highly believable that Rebecca’s diagnosis would slowly infringe on her life in various small ways until something big and terrible happened, heralding the beginning of the end.

This week’s episode doesn’t exactly trip over into “Everything is sad and awful” territory, but it gives us the most clear-headed glimpse of that next phase that we’ve had so far. Props to Mandy Moore, by the way: Her portrayal of elderly Rebecca marshaling her inner reserves to discuss end-of-life care with her kids is really, really great.

Read on for the highlights of the final season’s Thanksgiving episode, “Taboo.”

SUGAR PIE, HONEYBUNCH | As we flash back to Rebecca’s childhood, we watch her help her mother prepare the Thanksgiving meal. The dessert is a big deal: It’s sugar pie, made from a closely held family recipe. So after dinner, little Rebecca is perplexed when her mother serves her a sliver of the sweet and takes none for herself. “We have to watch ourselves,” Janet says abstemiously. 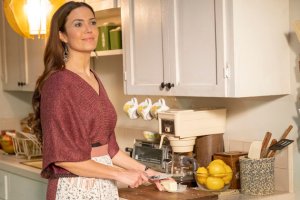 Years later, a newly engaged Rebecca and Jack are hosting her folks for Thanksgiving at their apartment. Janet is as she always is: picky, cutting, passive-aggressive. Everything builds until Janet tells Rebecca to go easy on the marshmallow-topped sweet potato casserole, and in her rebellion, Rebecca starts eating directly from the serving dish. The whole thing devolves, with Rebecca stalking off. Janet then tells Jack that she and Rebecca’s dad are moving to Connecticut, news that eventually propels a teary and cooled-off Rebecca into her mom’s arms. Then both women gang up on Jack about how he passed along the information to his future bride, and all is well.

THE SWEETEST TABOO | Oh look, yet another flashback! This one is to the Rebecca-as-recent-widow time. Randall and Beth arrive home from college to celebrate Thanksgiving with his family, and Randall is taken aback by Kate’s weight gain. But when he brings it up with Kevin, whom you’ll recall is drinking too much and has cheated on Sophie, Kev doesn’t want to engage.

The dinner itself is rather awkward, given that Rebecca’s recent suitor Matt and Miguel’s lady friend Marguerite are a) both in attendance and b) not really top-of-mind for their respective dates. A post-meal game of Taboo really highlights how attuned to each other Miguel and Rebecca are — a realization that even Drunk Kevin has by the end of the evening. The teen tells Miguel that Jack is turning over in his grave at the thought of Miguel’s acting on whatever is going on between him and Rebecca. And his words, though slightly slurred, hit home.

Later, as Miguel goes to leave, he and Rebecca confess that their little jabs at each others’ dates weren’t harmless or accidental. And just as she’s about to talk about her feelings, he blurts out that he’s moving to Houston, where he’s got a new job and will be closer to his kids.

The news guts Rebecca, whose eyes immediately fill with tears. Miguel’s not doing much better; he barely chokes out, “I feel like I’ve been staying around because… it’s time Rebecca. Now that you’re back up on your feet, it’s time for me to go.” She says she doesn’t know how to process this turn of events. After all, “You’re my favorite person,” she says. He takes off, and she goes inside and sobs on her bed. Kate finds her mom inconsolable and, unable to do much, lies down next to her.

Also Read  What the SF school board recall doesn’t mean 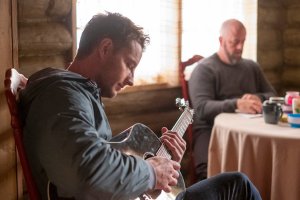 WE GATHER TOGETHER | Let’s hop ahead to present-day Thanksgiving at the cabin, where Kate is helping Rebecca make sugar pie. Kevin is being Peak Kevin, sitting in the living room and annoyingly trying to learn Counting Crows’ “Anna Begins” on the guitar. Kate and Toby can’t stop sniping at each other. Nicky is in Topeka with Edie and her family, and Randall and his brood are on the way to meet up with the rest of the Pearsons for what he forecasts will be “a rewarding and drama-free Thanksgiving.” You just know Beth has something to say about that. “Aw baby, I love your heart. Dig your ambition,” she says from the passenger’s side of the car during their drive. “But the Pearson epitaph will read: ‘Lovely people, cried a lot, dramatic as hell Thanksgivings.’”

And right away, Beth’s prediction starts bearing fruit. Rebecca immediately tells her grown children that she’s got something important to discuss with them after dinner. Then Kevin gets all weird when Miguel asks if the house Kevin is building will have a guest house for any non-family visitors. (In Kevin’s defense, the Pearsons have VERY few non-family acquaintances.) Meanwhile, Randall is obsessively documenting everything on his iPhone, all the better to preserve the memories before Rebecca’s illness makes family gatherings a lot different.

During the meal, Kate notices Toby — who all day has been making comments about the sugar content of Jack’s food — scraping the marshmallows off the top of the sweet potatoes Kate served the toddler. Kate calls him out for not wanting their son to be fat. Kevin tries to step in. “If I want advice from the 41-year-old manchild sleeping on my couch, I’ll let you know,” Toby spits at his brother-in-law. (Side note: A lot of people are acting inappropriately in this scene, but damned if Toby still doesn’t get 90 percent of my ire.) Toby adds that he thinks they’re overfeeding Jack, “and I think we would be insane not to acknowledge our genetics here.” Kevin barks at Tobes to take off the Pilgrim Rick hat. “I swear, every year with this family,” Beth whispers to Déja. Ha!

Later, Toby reasons that he just wants to protect his kids from the pain he (and Kate) felt as fat children. She brings up how she used to sing “Kiss Me” from She’s All That‘s big transformation scene under her breath in order to stop herself from eating tempting foods, and how she’s insulted that he doesn’t realize that her entire life has been a cycle of bingeing and dieting. “I want them to enjoy Thanksgiving without having shame about it,” she says, adding that she puts a lot of thought into what she feeds their son and daughter, and how doesn’t he know that?! 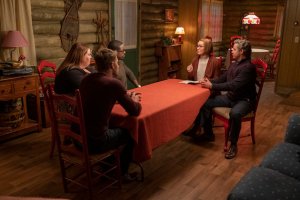 POST-DINNER PUNCH | That discussion Rebecca referenced earlier? It’s about her end-of-life care, and who’ll make decisions for her when she can’t do it for herself. Rebecca makes her children verbally acknowledge that Miguel is in charge, then explains that he was asking about a guest house because there’s a good chance Rebecca soon will need 24-hour, permanent care, and that caregiver will need a place to stay.

That news brings The Big 3 up short, as does Rebecca’s assertion that if Miguel happens to die before she does, Kate will be the decision-maker about her care. Oh, and one more thing: “You will not make your life smaller because of me,” Rebecca tells her sons and daughter. Everyone is crying! “I am your mother, and I am sick, and I am asking you to be fearless.” They agree, but the whole thing is a very sad affair.

Later, Kate asks her mom, “Why me?” Rebecca replies, “You are my daughter and my best friend. It was always you, Kate.” Then she leans close and whispers the secret ingredient for sugar pie.

Now it’s your turn. What did you think of the episode? Sound off in the comments!