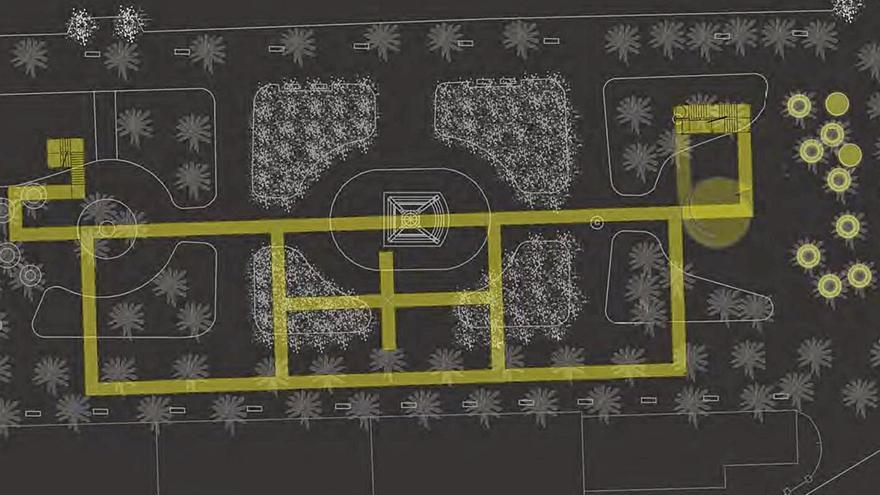 Refuge number 4 is considered one of the most emblematic and representative of those that were built and its state of conservation and safety is “ideal”, after the consolidation works that were carried out between the 1940s and 1950s, according to the project developed. by the head of Heritage Gregorio Alemañ. It is a narrow gallery or tunnels, rectangular in shape, in turn divided into three spaces. It is built by corridors of an average width of 1.5 meters and vaulted sections in an inverted “U”, with a total height of about 2.70 meters, located at a depth of about 15 meters and occupies almost the entire square .

The galleries and lower rooms are accessed by two boxes of stairs, of the three initially original (one of them was destroyed when the school was built and the other is currently sealed), made of ceramic clay brick and ramp areas in their last lower sections, as explained by the municipal technician. Inside, the remains of the electrical and ventilation installations are still preserved.

What the City Council intends to do is to rehabilitate the existing galleries, but maintaining its construction and the original atmosphere of the refuge, so it will carry out works to provide the hideout with lighting, ventilation and signage that allows it to be opened to the public as a museum. It should not be forgotten that the space has protection of Asset of Local Relevance (BRL) so the intervention will have to be minimal. The municipal intention is that the lights become a key element to guide visitors through the tunnels.

This will be the museum of the refuge

According to the project, there will be scenographic lighting at different points of the refuge, using openings and existing spaces that allow lighting, but not highlighting the light source, so as not to interfere with the suggestion of the visit. In its corridors there will be an exhibition on the shelters of the Civil War in Elche, where the visitor will have information to understand how they were built.

There will be different graphic references of how they were originally and there will also be image reflection points, in the form of mirrors, which will serve to convey to visitors different sensations found in relation to surprise, the suggestion of the unknown, anguish and respect for the space visited and for what it represents, as stated in the municipal project.

The Paseo de Germanías will also become an open-air museum. The City Council has proposed removing the kiosks and other elements of urban furniture to hold different exhibitions. To do this, it intends to take advantage of the eleven palm tree stands to install information panels on the Universal Declaration of Human Rights, the main motto of the project.

They also plan a reception center where the beginning of the exhibition of the interpretation of the Civil War shelters will be included, equipped with LED lighting, it will act as an «urban lantern». This new access to the underground gallery will be in the form of a circular metal envelope, approximately seven meters in diameter, in the shape of a spiral. Once the visitor enters the interior of the spiral, he will be able to find inside a permanent exhibition on the interpretation of the refuge that he is going to visit.

Following the same exhibition and aesthetic design, the opening of the second access to the promenade that is currently underground is planned, to be able to serve as an alternative emergency access, as well as the ventilation ducts and auxiliary facilities on the surface, in addition to having a forced air renewal system that will guarantee the salubrity of the indoor air of the shelter.