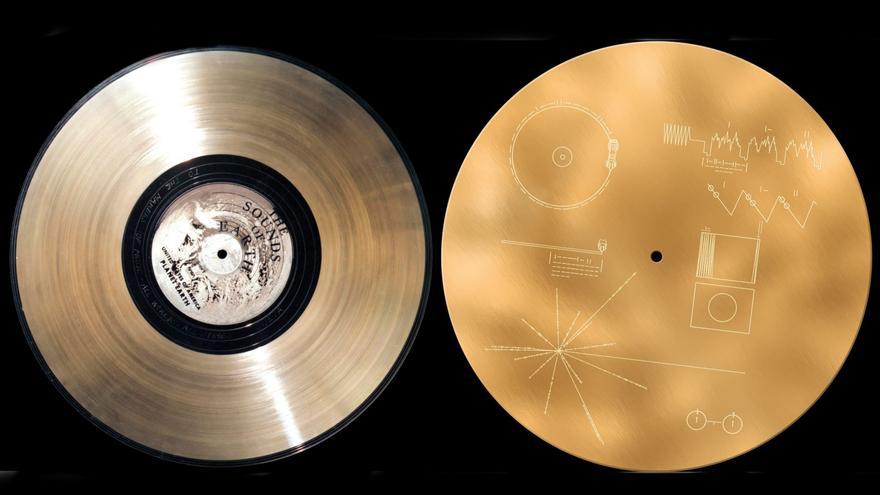 In 1977 the Voyager space probes on a mission that is expected to be completed in no less than 40,000 years, an estimated time it will take to reach the nearest star to our solar system.

Inside were included two phonograph records popularly baptized as “The Golden Record”, accompanied by a needle and playback instructions. These gold-plated copper discs, with a diameter of 30 centimeters, were created and introduced as “passengers” of these ships with information about our life, before the remote possibility that an extraterrestrial civilization traveling through interstellar space could find them. .

The cover of the disc is made of aluminum and an ultrapure sample of the isotope uranium-238, which has a half-life of 4,468 million years.

The discs, which are titled “The Sounds of Earth” (“The sounds of the Earth”), contain sounds and images that reflect what the human being and the planet we inhabit is like. This material was selected by NASA, advised by a committee chaired by the well-known astrophysicist and cosmologist Carl Sagan, who defined the initiative as throwing a “bottle into the cosmic ocean.”

In this NASA post on Twitter you can see the moment when the disc is inserted in the spaceship:

What would the aliens find on the gold records

Although the odds of possible alien life forms encountering Voyager spacecraft are more than remote (they will eventually stop emitting electromagnetic radiation), they would then have to be able to interpret and understand the messages contained in the discs. Last year the signal was still received from one of the ships:

The first audio track includes a greeting in English from the UN General Secretariat, while the second contains greetings in 55 languages. The message in Spanish, which ranks thirteenth, reads aseptically: “Hello and greetings to all”.

More “salt shaker” has the greeting in Mandarin, which comes to say: “How is everyone? We really want to meet you, if you have time come visit usPlease. “The amoy dialect is not far behind:” Friends of space, how are you? Have they eaten yet? Come visit us, if you have time. ”

The third audio section includes a whale “salute”, in addition to four additional languages, including Esperanto, with which it is transmitted that “We strive to live in peace with the peoples of the entire world, of the entire cosmos.”

Do you want to hear all the greetings? Here you have the recording.

Two years ago NASA posted this tweet: “Almost 30 years ago, our Voyager 1 spacecraft took the first family portrait of our solar system, including the image of Earth as a small point of light, known as the” Pale Blue Dot. “Take a moment to appreciate the only home we’ve ever known: https://go.nasa.gov/2N8xACh.”

Almost 30 years ago, our Voyager 1 spacecraft snapped the first-ever family portrait of our solar system — including the image of Earth as just a tiny point of light, known as the “Pale Blue Dot.” Take a moment to cherish the only home we’ve ever known: https://t.co/KqGPAIARLp pic.twitter.com/O3qBpIX2Iz

After the “introductions” were over, the aliens could listen earth sounds like those of the wind, the rain or the sea; those of animals such as the frog, cricket, birds, hyenas, elephants, wolves or chimpanzees; footsteps, heartbeats and human laughter; and of vehicles such as the train, the car or the bus, among many others, such as the sound of a kiss or the first words of a mother to her newborn child.

There is also an hour-long recording with Ann Druyan’s brain waves, wife of Carl Sagan, who during that time mentally reviewed the history of Humanity and also indulged in emotions such as falling in love, so that if aliens were able to “read” their thoughts they would better know what human beings are like .

The sound section is completed with a varied musical selection with songs and compositions from different cultures. Johann Sebastian Bach is the most represented artist, with three appearances, while, as a curiosity, the record company EMI opposed the inclusion of the song “Here Comes The Sun” by the Beatles, despite the fact that they did not put any fault.

As in Eurovision, Spain was not taken into account, since there is no not a single national theme among the 90 musical minutes of the album.

On the other hand, our country does have a presence among the 115 images included to show aliens what life is like on Earth. He does it through the cover of the book “Cooking fish. Cuisine of Spain and Portugal”, from Time-Life publishing house.