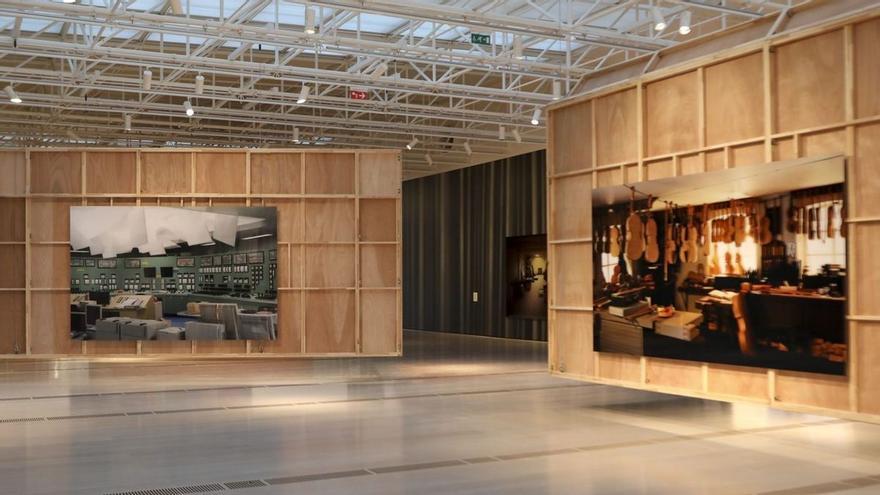 The German artist Thomas Demand created and destroyed a false world that he now exposes in Santander, with photographs of recreations on paper and cardboard that will remain suspended until March 6 from the ceilings of the Botín Center, alluding to the suspense of life that the pandemic has entailed.

The exhibition, made up of pavilions that simulate an urban landscape and images, many of which are unpublished, is complemented by a catalog that includes a text on the Nobel Prize for Literature artist Mario Vargas Llosa.

Demand, one of the most admired and controversial contemporary artists, is known for his large photographs of hyper-realistic models, full-scale sculptures or landscapes, made on paper, and destroyed after being photographed.

All his images, also the 36 that are exhibited in the Botín Center and that come from different collections, represent artificially constructed spaces that appear real at first glance, in which there is no lack of references to other artists from different disciplines, and tributes to architecture.

“Empty” files of Donald Trump, the tower that bears his last name, a birthday party, the scene of a crime, a cruise ship that becomes a quarantine center or a table ready for dinner are just some of the protagonists of his images.

In the exhibition you can also see a video made through stop-motion, using 800 images joined with this “Disney technology of the twenties”, and with a series of small impressions that each one made in one day, unlike the large ones, which usually take months or even a year.

The world in a study

“When I take photographs I bring the world to my studio, I create a world. I do not take the camera out on the street and wait for the optimal conditions to photograph it, I recreate everything from scratch in my studio, in a kind of one-on-one “, explained the artist, who will return to the Botín Center to offer a workshop when the show is over.

The pavilions that house the photographs are “false and real at the same time”, explains its author, who adds that the photographs mask “a fictitious truth” because it includes them “in a different sphere”, eliminating people and creating a “theater of emotion”.

Three years ago, when he went to see the Botín Center and see its space – the show was scheduled for last year, but it could not be done due to covid-19 – he liked the ceiling of the second floor room to hang his works, something he hadn’t done before.

“It has been very successful since the pandemic has also kept our lives in suspense during all this time,” he stressed.

The artist has been accompanied in the presentation by the curator of the exhibition, Udo Kittelmann, who has highlighted the careful selection of the photographs.

“Selected photographs have been carefully chosen, in such a way that they show events of our daily life, scenes that can attract our attention when we tour the city in the morning or in the afternoon and, of course, events and images that belong to our collective memory and appear in the media “, explained the curator.

In his view, Demand’s work “tries to be objective with what happens in the world but, at the same time, it always tries to create and touch emotions that are often hidden and not talked about.”

For the executive director of the Botín Center, Fátima Sánchez, the exhibition allows to fulfill the social mission that the center has of “developing the creativity” of everyone who visits it.

“It is a challenge for our gaze. It requires observation, it offers us beauty and, without a doubt, it stimulates our imagination,” Sánchez said.