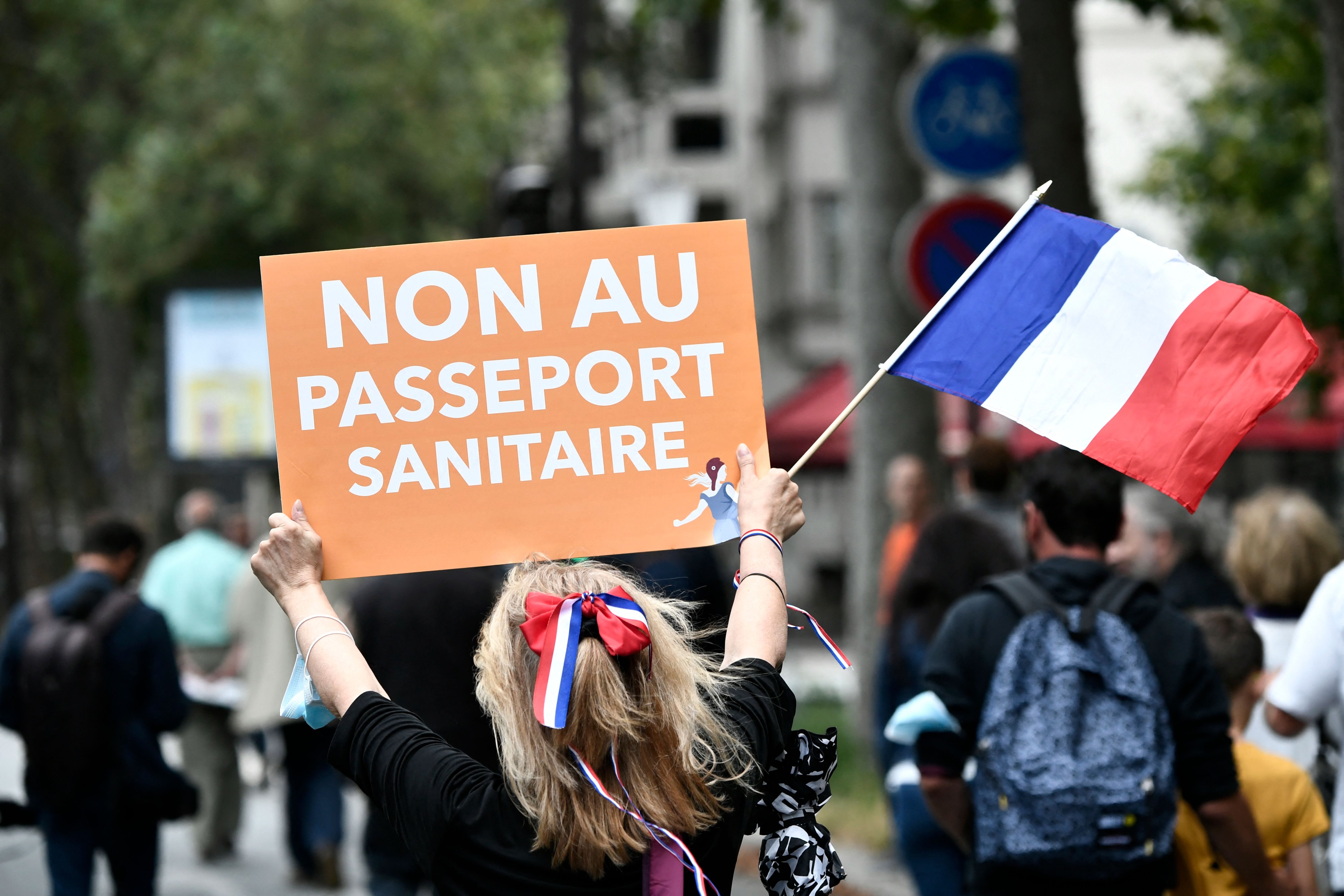 Tens of thousands of French people took to the streets again this Saturday, for the fourth consecutive week, to protest against the covid certificate and the imposition of a mandatory vaccination to professional sectors such as healthcare. 48 hours after the implementation of the certificate throughout the country starting on Monday, after the Constitutional Council validated it on Thursday, the demonstrations also became a new – not the last – cry of frustration against what many of the Participants consider a “compulsory vaccination” made up and a restriction of freedoms of “dictatorial” overtones. According to the Interior Ministry, at least 237,000 people demonstrated in the more than 150 calls throughout France, 17,000 of them in Paris. The figure confirms the upward participation in these protests that began a month ago: last week, there were 204,000.

Sanna, a thirty-year-old Parisian, joined this Saturday for the first time one of the four processions summoned in the French capital. It is not “anti-vaccination” nor does it deny that there is a global health crisis. But the imposition of the health certificate supposes a “huge restriction of freedoms that we do not know when we will recover,” he says. “It is a national blackmail unworthy of a modern democracy” that will cause a “segregation, to the limit of a apartheid, between those vaccinated who will be able to live a normal life and those who are not vaccinated ”.

Although the Government spokesman, Gabriel Attal, promised on Friday that there will be a week of “filming” to allow adaptation to the new measures, they will come into force, as planned by the Executive of Emmanuel Macron, on August 9. As of Monday, to enter any bar or restaurant, even on the terrace, you will have to present proof that you have either been vaccinated, have a recent negative test or have passed the coronavirus. The covid certificate will also be necessary to board national flights or long-distance trains and buses. The measure was already in force since July 21 for places of “leisure and culture” that bring together more than 50 people, such as museums, theaters or cinemas. The law to implement the certificate, announced by President Emmanuel Macron in a speech on July 12, was approved on July 25 after nearly a week of heated disputes in the French Parliament.

The Constitutional Council validated it on Thursday, in a decision denounced by some of the most visible figures of the protests, such as the ex number two of the far-right National Regrouping, Florian Philippot, as a “betrayal of the institutions to the people”. In their verdict, the Wise Men, as the members of the Constitutional Court are known, also approved in general terms the obligation for health personnel to be vaccinated before September 15, under penalty of being suspended from employment and salary if they do not do so.

Christophe, a radiology technician, knows that he can be unemployed in just over a month if he continues to refuse to get vaccinated. “I will lose my job, but I will be consistent. I am also willing to stop my normal life ”in the absence of a certificate to be able to go to cinemas or restaurants, says this health worker who demonstrated in Paris this Saturday. He assures that it is not anti-vaccines in general, but considers that governments have been hasty when it comes to “imposing RNA technology vaccines not yet fully tested”, which leads him to reject them.

A few meters from Christophe, Soilha, who works as an administrator in a hospital, is not so sure that she will not give in and will get vaccinated so as not to lose her job. But, for the moment, he will continue to protest and hope that the pressure from the streets will make the Macron government give in. “I am against forcing vaccination, we are deprived of the right to freedom,” he criticizes.

However, it does not seem that the Government is going to back down. Throughout the week, Macron has launched multiple messages on social media urging the population to get vaccinated. “Get vaccinated, vaccinated, vaccinated. It is a question of civility and a pact as a nation “, reiterated on Friday the president, who once again refuted the notion of freedom wielded by the protesters:” Our freedom is only valid if the freedom of others is preserved. It is worth nothing if by exercising it we contaminate others; then that free being becomes irresponsible. Get vaccinated if you want your friends, your parents and siblings ”.

Almost 66% of the French population has already received at least one dose and 54.6% have already completed the regimen, according to the Ministry of Health. According to the latest official statistics, published by the Government on Friday, at the end of July there were 6.4 times more daily hospitalizations among the unvaccinated than among those vaccinated, a figure that rises to 12 times more in the case of admissions. in intensive care. There were also 5.2 times more deaths among the unvaccinated than among the vaccinated.