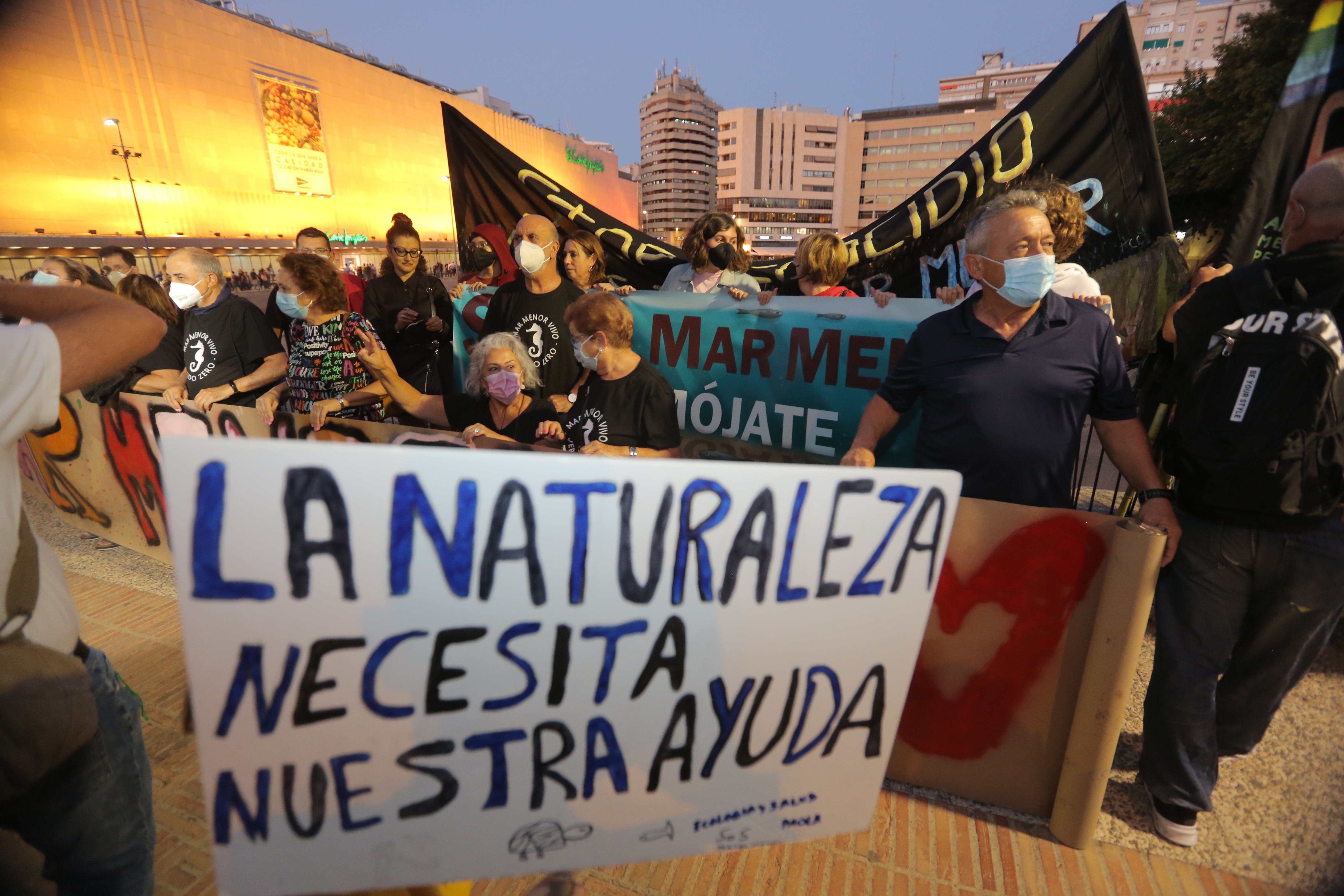 “We will not stop until we have a living Mar Menor again.” With this motto thousands of people have walked the streets of Murcia this Thursday to demand that the public administrations adopt measures to recover their lagoon, the one with transparent waters that they once knew and have lost. Nine citizen groups have come together around the slogan “SOS Mar Menor. For a Mar Menor with a future ”to protest the situation of the lagoon, two months after the serious crisis it suffered in August, when 15 tons of fish were caught. They suffocated due to the lack of oxygen in the water due to the large amount of nitrates that the Mar Menor receives, mainly from agricultural activity.

Manuel López, a 43-year-old from Murcia, has taken to the streets, to protest, to try to recover that place where “I have played and I have bathed and to which now I am ashamed to return”, he tries to make himself heard amidst the cries of other people as angry as him. “I am very sorry for everything they have done, the lagoon is now green and everything is urbanized, you can’t even walk around,” he sadly describes. Close to him, his aunt, Celina Gironés, who has spent the summer in Manga del Mar Menor “since she was little” cannot bear the “ecocide” she is seeing. “It affects me as a person and there are culprits,” he laments.

During the march, Isabel Martínez de Velasco, spokesperson for the SOS Mar Menor platform, emphasizes the need to put pressure on governments and that there is hope. “If we did not see a future, we would not fight, but if the administrations do not act, we have to force them. So far they have done nothing, but imagine a dead Mar Menor. It would be the death of all our peoples, ”she says, wearing a black T-shirt with the cry for help for the coastal lagoon that she shared with a large part of the protesters.

That “cry for help”, recalled the president of the Association of Southeast Naturalists, Pedro García, was already heard two years ago in Cartagena, when tons of fish emerged dead on the beaches bathed by the Mar Menor due to the lack of oxygen in its waters. Then some 55,000 people took to the streets. Some 45,000 have attended this Thursday’s appointment, according to the organizers’ calculations, but the social “cry”, says García, is the same after the other episode of anoxia in August. On both occasions, the regional administration blamed external factors for this: the torrential rains in 2019 or the increase in temperature in 2021. “They have not stopped lying to us about the health of the Mar Menor and they have lied to us about the origin of its state. critical ”, said the manifesto that has been read before the Ministry of Agriculture, Water and Environment.

But the criticism is not only directed at the regional government, whose president, Fernando López Miras, protesters have called for his resignation. The march started at 8:00 p.m. simultaneously from the headquarters of the Central Government Delegation in the Region of Murcia and from the San Esteban Palace, headquarters of the regional government’s presidency. Among the attendees was Ramón Pagán, from the Platform Pact for the Mar Menor, who considers it essential to comply with the law that is already in force to protect the lagoon and that limits the use of fertilizers, because it is not being applied. Pedro Luengo, president of Ecologists in Action in the Region of Murcia has also claimed the immediate elimination of the 8,000 hectares of illegal irrigation in the area, which could have already been carried out by both the regional and central governments and However, no action has been taken.

For Ángela García, of the citizen groups Banderas Negras and Por un Mar Menor Vivo, the beginning of the end of the current situation passes through the approval of the popular legislative initiative that aims to give the lagoon legal personality. On October 28, the deadline to collect the half million signatures necessary to request this law in the Congress of Deputies ends, and there are still around 100,000 supporters. In their manifesto, the organizers have demanded that the autonomous community and the Segura Hydrographic Confederation (CHS) dismantle illegal irrigation and apply and enforce the control measures for intensive agriculture contained in the Mar Menor Protection Law.

The protesters have asked the Ministry not to transfer this problem to the entire Mediterranean, but rather to prioritize measures that guarantee the end of the entry of nutrients through the Albujón promenade. To the European Union, to stop looking the other way and control the use of the funds granted to the community. And, in general, to “those responsible for this disaster” who “take responsibility” and “let others do the work.”