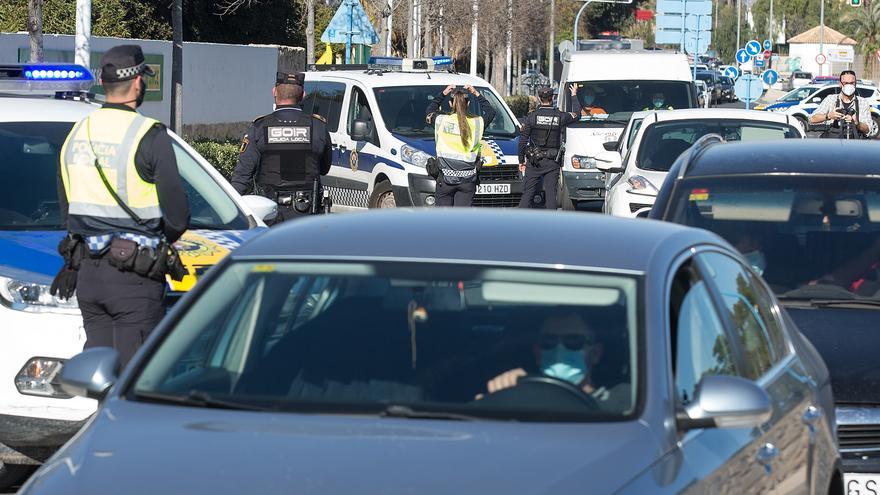 The Valencian Community have applied in the last three months numerous restrictions against the pandemic, which have gone from less to more before each worsening of the data, but they have not prevented that at the moment it has the highest incidence in Spain or the worst percentage of covid patients in ICU of the autonomous communities.

Although before the entry into force of the second state of alarm had applied specific measures in municipalities, since the end of October the Valencian Government has announced on eight occasions generalized restrictions in the Community, some after daily peaks of 9,810 infections (23.5% in Spain) or 98 deaths (24%).

The Valencian Community was the first to apply the night curfew, and the only one that prohibited family trips to meet up at Christmas, despite which the evolution of epidemiological data has finally led to drastic measures, such as the total closure of the hospitality and a semi-confinement in practice.

The first measure that was announced, on October 24, was the night curfew from midnight to 6 in the morning, as well as the limitation of meetings to six people, the night closing of gardens or the prohibition of consuming bars in the hotel industry.

The pandemic was beginning to worsen: in mid-October, after a four-day bridge, an upward trend reversal began, and a week later the cases had doubled, reaching 1,690 in one day, the highest since March . The cumulative incidence was high, 153, but the lowest of the peninsular communities.

Five days later, the Valencian Community was the first to announce the perimeter closure of the region, in principle for seven days, although it has been extended and remains in force, until February 15. By then, the cumulative incidence over fourteen days was 218 cases per one hundred thousand inhabitants, double that of two weeks before.

On November 6, with a scenario of “sustained and generalized transmission” of the virus and increasing hospital pressure (there were 1,333 hospitalized, 222 in the ICU), although it was better than other autonomies, the capacity in shops and ceremonies was reduced, and the two municipalities with the worst data: Elda and Petrer.

Just at that moment, the Valencian Community began a decrease in cases that would last four weeks, and which took place on December 5, when the hospitalized covid They had dropped to 1,194 and weekly infections had been reduced, to announce more lax measures for Christmas: meetings of up to ten people, delay in the start of the curfew and lifting of the perimeter closure on the designated days.

Controls and retentions at the entrance to Alicante. ALEX DOMÍNGUEZ

However, December 6 marked a new turning point, with an increase in infections which took twelve days later to correct the christmas measurements. By then, there were four consecutive days with more than 2,000 daily cases, and the incidence was at 254 after growing 27% in a week and for the first time exceeded the national average.

The Valencian Community prohibited exceeding the 6 people in meetings, without any exception; brought forward the start of curfew at 11 p.m. (only allowed to start at midnight on Christmas Eve and Christmas) and the perimeter fence was reinforced, preventing trips by relatives or close friends.

Despite these measures, the coronavirus evolved so negatively that more restrictions were announced on January 5. In two weeks, the incidence had grown by 16% (to 322) and the covid income by 52% (to 2,121). And in a week, 196 deaths had been reported, placing the total of the pandemic above 3,000.

The decision of the Valencian Government then was to advance the start of the curfew at 10 pm; confine the 29 municipalities with a “critical” incidence; that the hotel business closed at five in the afternoon, and further reduce the capacity of the shops, a situation in semi-confinement practice.

However, two weeks later, the incidence was too high (896), the contagion curve left reports above 7,000 daily cases and there was tension in the hospitals, with 3,829 admitted, 515 of them in the ICU, which led to decree the Total closure of hotels and sports centers, and non-essential shops from 6 pm.

The penultimate decision of the Valencian Government, after registering the worst week of the entire pandemic (with 48,000 infections, 571 deaths and hospital stress, with 4,338 admitted, 536 of them in the ICU) has been to limit meetings to cohabitants in the private space and a maximum of two people on the street, and confine large cities around the perimeter on weekends, until mid-February.

After four days with the highest cumulative incidence in Spain (1,431 at the moment), the last measure has been the mandatory use of the mask to play sports in urban centers between 10 and 19 hours and on the beach “at all times “, in addition to the closure of spas and saunas, which come into effect after the worst month of the pandemic has closed.