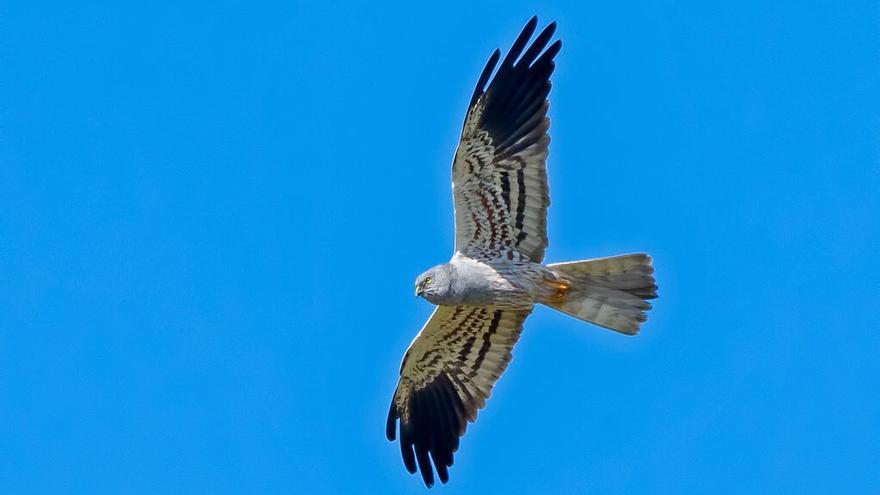 Montagu’s harrier, common shrike and reddish alzacola, three species associated with agricultural environments and that present an alarming population decline in Spain, are the three candidates to be Bird of the Year 2022, a distinction made by SEO / BirdLife since 1988, accompanied by a communication and conservation campaign. Voting is open to the public until the 13th of this month, at 11:00 am, on the website https://seo.org/eleccion-ave-2022/.

The three species chosen have been included in the Red Book of Birds of Spain due to the risk of extinction, population decline and the conservation threats that threaten them. Specifically, the Montagu’s harrier has been listed as’Vulnerable‘according to the IUCN categories, and the reddish tail and the common shrike as species’In danger’.

In all three cases The significant population decline is mainly due to the loss of natural elements in the agricultural landscape, the widespread use of pesticides and earlier harvests. SEO / BirdLife organizes the Bird of the Year campaign with the aim of drawing attention to the delicate situation presented by some of the Spanish bird species.

With this action, the NGO focuses on a species that requires special attention for its poor state of conservation or because it symbolizes the urgency to protect habitats who host it to demand measures for its conservation from administrations and institutions.

“It is a responsibility to give a voice to society because it is what drives us to work for a more sustainable and healthy world,” says Asunción Ruiz, executive director of SEO / BirdLife.

“We are at a crucial moment in order to stop the ecological crisis that we face. The birds give us clear red flags on the main environmental problems that we must attend, by protecting them we are taking care of ourselves ”, adds Ruiz.

“It is only possible to stop the loss of biodiversity and climate change if we protect our greatest capital, nature. Only by protecting our natural heritage can we guarantee a healthy and quality future ”, indicates the SEO / BirdLife leader.

“That we see fewer sparrows, fewer swallows or fewer swifts is not anecdotal but a powerful clear alarm signal that we are facing an unprecedented ecological crisis that it should force us to rethink our relationship with nature “, Asunción Ruiz explained after the last Bird of the Year election.

As it happens, most of the birds distinguished by SEO / BirdLife are common species. The explanation, as revealed by the data from the monitoring program for common birds in spring carried out by SEO / BirdLife, is that these birds have experienced a huge declinein recent decades.

-The aguilucho cenizo (Circus pygargus) can make the singularity and the ecological value of cereal farming environments where it lives. According to SEO / BirdLife, few birds of prey are so closely linked to human activities as this one, which in Spain depends closely on the large cultivated areas of cereal.

“Through this species it will be possible to raise awareness in society, politicians and farmers to seek joint solutions that avoid the destruction of nests during the harvest season and the maintenance of agricultural exploitation systems that are more respectful of the good state of biodiversity ”, points out the NGO.

-The common shrike (Lanius senator) is a migratory species that is mainly distributed throughout the Mediterranean region, closely linked to holm oak forests, meadows, holm oaks, arboreal crops, both irrigated and dry, open pine forests, scrub with scattered trees, and so on.

The boundaries between the different lands are key both as nesting places and as prey capture sites. It is one of the four species of shrike present in Spain that feeds mainly on insects. “The disappearance of both elements, boundaries, hedges and insects, may be associated with their decline”Says SEO / BirdLife.

-The alzacola rojizo (Cercortichas galactotes) is a species closely linked to the traditional vineyard and to a lesser extent to the traditional olive grove. It is found in Andalusia, Extremadura, Murcia and Alicante. It is a migratory bird that in Spain it only appears during the breeding season, preferably in woody crops, in areas with a dry and warm climate.

“Through this species it will be possible to spread and make known the importance of these traditional woody crops, the need to halt its decline and its potential to conserve and recover biodiversity, as has been demonstrated by the work in (the LIFE program) Olivares Vivos ”, concludes the NGO.