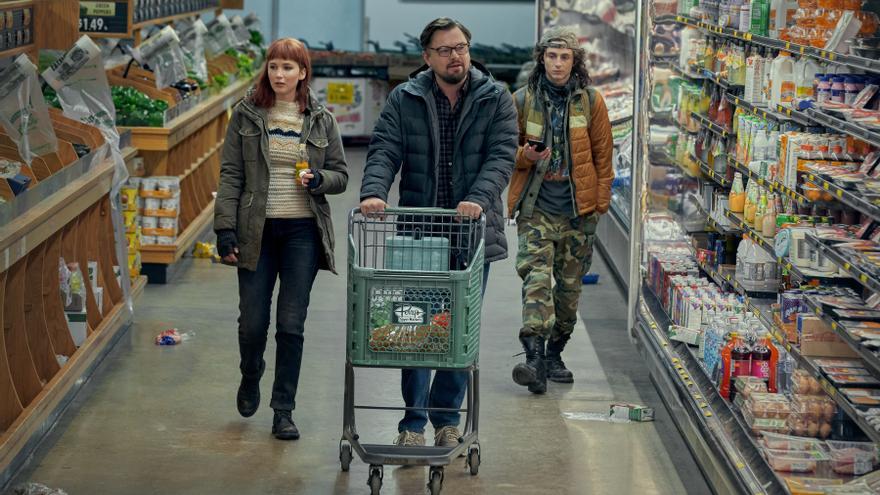 Jennifer Lawrence and Leonardo DiCaprio become astronomers in ‘Don’t look up‘; Raúl Arévalo and Paz Vega in a thriller in the Valencian Albufera and a lot song. That’s what this week’s many and varied movie releases have to offer.

Jennifer Lawrence and Leonardo Dicaprio are two astronomers who team up to try to stop an impending catastrophe. That is the premise of the comedy directed by Adam McKay that arrives this Friday in Spanish cinemas and in which there are names of the stature of Meryl Streep, Thimothée Chalamet, Cate Blanchett, Ariana Grande or Mark Rylance.

‘The mud’, an environmental thriller in the Albufera

Set in the Albufera of Valencia, ‘El lodo’ is a thriller with an environmental background starring Raúl Arévalo and Paz Vega, which is the second feature film by the Valencian director Iñaki Sánchez Arrieta, who has looked at himself in the mirror of “The minimal island” but also of “Hunting dogs” to make this film.

Nanni Moretti continues with her daily and family stories

The ‘Three floors’ of a neighboring building are the setting chosen by the veteran Italian filmmaker Nanni Moretti to continue delving into the usual themes of his cinema: family and human relationships. A film that competed in the official section of Cannes and in which the director forms one of the leading couples with Margherita Buy.

‘Life was that’: the talent of Petra Martínez

Petra Martínez is popular for her roles in television comedies, but she is an actress with many more registers, which the general public will discover in “Life was that”, a hard and tender film by David Martín De los Santos about the relationship between a woman older and a young woman (Anna Castillo) who has been nominated for two Goya: Best New Director and Best Leading Actress.

‘What did we do wrong’, a reflection on the relationship crisis

In the first person and through a series of encounters with her ‘exes’, Liliana Torres reflects on her new film, ‘What did we do wrong?’, On the crisis of the couple in current times with a story that also stars.

‘Zero and Ones’, Ethan Hawke’s encounter with Abel Ferrara

The always extravagant and often controversial Abel Ferrara directs to Ethan Hawke en ‘Zero and Ones’, a thriller in which the actor plays an American soldier stationed in Rome that sees the Vatican City blow up. A film that won the Best Director award at the Locarno Film Festival (Switzerland).

‘The Bloom Family’, a human drama with Naomi Watts

Naomi Watts as Sam Bloom, a woman who is paralyzed in an accident and that he finds in a bird, Penguin, the impulse to recover. It is the plot of “The Bloom Family” a film by Glendyn Ivin that was presented at the Toronto Film Festival and at the BCN Film Fest.

The famous Broadway musical leaps into the cinema by the hand of Stephen Chbosky and starring again by Ben Platt, who won a Tony, a Grammy and an Emmy for his performance in the theater of Evan Hansen, a worried, nervous and isolated student who seeks acceptance. He is accompanied by Julianne Moore, Amy Adams or Danny Pino.

‘The first woman’ a documentary on mental health

Mental health is at the center of the documentary ‘The first woman’, directed by Miguel Eek and that follows Eva, who is discharged after six years in the psychiatric hospital. For her, it is the first step to becoming what everyone calls a “normal person”.

Directed by Violeta Salama, ‘Alegría’ is the portrait of an exotic Jewish wedding in Melilla by the hand of Cecilia Suárez (the Joy of the title), Laia Manzanares, Sarah Perles and Mara Guil. A story of roots, family and confrontations that also features Leonardo Sbaraglia and Adelfa Calvo.

A horror film that mixes technology with the supernatural. That’s ‘Demonic’, the story of a young woman who tries to connect with her comatose mother through a scientific experiment. Starring Carly Pope, Chris William and Michael J. Rogers, the film is directed by South African Neill Blomkamp and was presented at the Sitges Film Festival.

‘Valentina’ dreams of being a trapeze artist and believes that because she is Down she will not be able to achieve it. This is what this film by Chelo Loureiro, nominated for the Goya for the best animated film and in which he has collaborated Emilio Aragon, creator of the song ‘Eres especial’ and by Andrés Suárez, who voices Valentina’s father.

Only two days in theaters will be the documentary about the tribute concert to Coque Malla that was held in 2018 at the Nuevo Alcalá Theater in Madrid and that has the collaboration of artists such as Jorge Drexler, Santi Balmes, Iván Ferreiro or Dani Martín.

An “intimate look” at the trajectory of the South Korean band Monsta X. That’s ‘Monsta X: The Dreaming’, a documentary that arrives this Thursday in Spanish theaters that includes interviews with each of its members, follows them on their tour of the United States and offers an unpublished video of a concert.