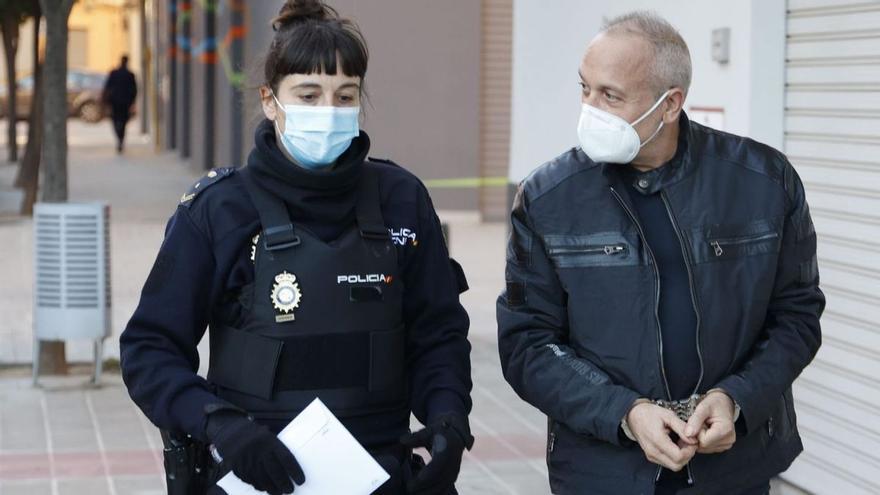 “The sofa in my house is burning, I’m trying to get in but I can’t, my wife is inside.” This call to the emergency number 112 on Christmas Eve last year reporting a fire with a possible victim at a home in the Good Shepherd street in Mislata He was hiding behind a sexist crime, as the investigations of the Homicide group of the National Police have now been able to clarify. Thus, this Thursday the husband of the deceased, Juan José GH, a local policeman from Mislata (Valencia), 62 years old and retired, he was arrested in Xirivella, as he advanced exclusively Lift-EMV in its digital edition, accused of the crime of murder and of having started a fire in the house, at risk for the rest of the neighbors, with the intention of hiding their crime.

The key piece in the resolution of the case, which yesterday led the head of the Investigative Court number one of Mislata to agree to the entry into provisional prison of the alleged murderer, has been in the autopsy performed on the corpse of María Amparo Cortés, 58 years old. The forensics of the Valencia Institute of Legal Medicine revealed that the woman had not died as a result of the action of the fire or intoxicated by smoke – in fact there was no presence of combustion debris in the lungs– If not due to asphyxia, as revealed by the small lesions with accumulation of blood in the cervical area detected at autopsy. After ruling out all the possibilities one by one, both an accidental death and suicide, or even the possibility of a heart attack, the forensic specialists concluded that the most compatible cause by the evidence analyzed was a mechanical asphyxia due to compression of the neck.

Likewise, the toxicological tests found in the body of the victim a high degree of alcohol in blood, about 2.15 gel —which would be equivalent to a rate of 1.7 milligrams of alcohol per liter in exhaled air—, a state of intoxication that would have considerably diminished his defense capacity, hence the cause speaks of murder and not homicide.

It so happens that the man now arrested for the death of his wife He was already arrested in 1998, accused of raping a woman that curiously also died as a result of a fire in similar circumstances that occurred just two days before the date on which the trial was scheduled.

Calm and relaxed before the judge

With a calm demeanor and without showing any objection to being photographed, the accused arrived early yesterday morning at the Mislata courts guarded by the National Police. The alleged murderer has denied at all times any relationship with the death of his partner, whom he alleged yesterday before the judge “he loved very much.” Juan José GH limited himself only to answering the questions of his lawyer, Víctor Soriano, who preferred not to make statements at the end of the judicial interrogation.

The version that the accused maintains is that that afternoon took the dog for a walk shortly before 7:30 p.m. and that when he returned to the house he found the house already on fire. He says that he tried to enter to save his wife, but that he could barely access the interior and pour water with a basin, as he told the police when he testified, since after his arrest he preferred to remain silent. Some witnesses confirm his alibiAlthough it is strange that finally the dog with which he was seen on the street was found dead inside the house, in one of the rooms at the back, away from the main entrance.

The fire was intentional when finding combustion accelerators

The agents of the scientific police ruled out that the fire had been started by a cigarette and concluded that the fire had been “caused by human action”, when they found traces of combustion accelerators, specifically gasoline, in a first inspection carried out five days after the fact. In the second they did not endorse the findings of accelerators, but this was carried out a month later, when the house was no longer sealed and the suspect had recovered the keys.

Neighbors of the couple assure that the relationship between them was very conflictive. Thus, they consist up to three episodes of abuse from him to her and even 55 police interventions with said marriage. In some of these cases due to the woman’s suicide attempt. Despite these nine history of suicide attemptsThe investigators, first those of the Mislata Police Station Judicial Police group and later, those of Homicides, ruled out that the fire had been caused by the woman.

In fact, forensics They place the time of Amparo’s death shortly after lunchThat is, long before the fire broke out, which according to the fire department report was due to slow combustion, which also does not seem to match the statement of the now incarcerated person, who claims that he had left home minutes before 7:30 p.m. hours.

On February 14, 1998, Juan José GH entered the Picassent prison while he was being investigated for raping a woman at his home in Mislata. The victim, Trinidad GG, reported him for having sexually assaulted her while on duty, when he went upstairs with her to get her ID, as he wanted to identify her.

The now retired agent remained in provisional prison for nine months, until November 12 of that year, when the Mislata Investigating Judge three, who was handling the case, allowed him to be released from jail. The trial against him for that violation was set for Tuesday, May 16, 2000, a year and a half after his release.

However, that day there was no trial. The victim and the main prosecution witness that the prosecutor had, who I asked him for 10 years in prison, and the private accusation brought by the woman’s two daughters, was that day in an induced coma in the ICU of La Fe Hospital, after suffering very serious burns when a fire broke out when she was alone in the living room of her house, in the neighborhood of Patraix. Literally, her partner, who was sleeping in another room, found her engulfed in flames. Trinidad died three months later, on August 18, 2000. He was never able to testify.

The timely death of Trinidad left the trial for rape against the local police in acquittal, which was finally held on December 19 of that year. The fire was investigated by Judge of Instruction 12 of Valencia, who closed the case when the Police concluded that the fire had been accidental.