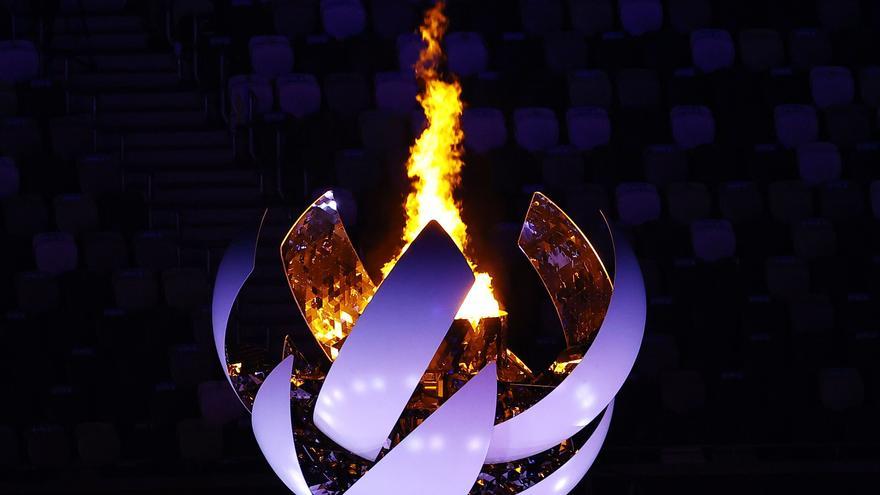 The Olympic Stadium and hundreds of athletes put the finishing touch to the Tokyo Olympic Games on Sunday in a closing ceremony full of symbolism, tradition and, above all, light and color To say goodbye “the hope games“and open a new Olympic cycle that will end, in three years, in Paris.

“You have created magic in these Games. You were faster, you reached higher and you were stronger because you were together. This is a powerful message of solidarity and peace. In these difficult times, you give the world the most precious of gifts: hope. This gives us faith in the future. The Tokyo Games have been the Games of hope, solidarity and peace. The Japanese people can be proud of what they have achieved, “said the president of the International Olympic Committee (IOC), Thomas Bach.

Again without a general public at the Tokyo Olympic Stadium, the event started with a video of the best moments of the Olympic event under the watchful eye, among others, of the Emperor Naruhito and the president of France, Emmanuel Macron, as the highest representative of the country that will host the next Games, those of Paris 2024.

All the flags, after the raising of the one of Japan, were entering the enclosure, with the euphoric karate fighter Sandra Sánchez, who last Thursday was proclaimed champion of kata in the Olympic premiere of her sport, carrying the Spanish flag; Damien Quintero, who finally could not accompany her in that honor, did participate in the celebrations along with the rest of the delegation still present in the Japanese capital.

Like the talaverana, many protagonists in these two weeks paraded as flag bearers, such as the Italian Marcell Jacobs, surprising champion of 100 and 4×100 meters; or the dutch Sifan Hassan |, gold in 5,000 and 10,000 meters and bronze in 1,500, before the light and color show began in the stadium.

From among a circle full of colors, representing all the flags of the world, thousands of light particles flew, thanks to the Moment Factory study, to form the Olympic rings, while the center of the enclosure was illuminated to give way to the Tokyo Ska Paradise Orchestra. The atmosphere, until then solemn, became festive while the chords of the ‘Hymn of Joy’ sounded, received with euphoria by the hundreds of athletes who were already crowding to say goodbye to the Games.

The ceremony continued with the traditional delivery of medals from the marathon, which for the first time would crown women alongside men at the Olympic Stadium. The Kenyan Eliud Kipchoge received his gold on a men’s podium completed by the Dutch Abdi Nageeye and the Belgian Bashir Abdi, with his compatriot Peres Jepchirchir doing the same in the women’s category ahead of the also Kenyan Brigid Kosgei and the American Molly Seidel.

The show continued, and the tradition made its way with videos in which the organizers presented, as in the Opening Ceremony, more samples of Japanese culture, such as the Ainu (Hokkaido), Ryukyu Eisa (Okinawa) or Nishimonai Bon Odori dances. , the dance of the dead in Akita Prefecture.

And it was the turn of the relay, just after the Olympic anthem performed by the opera singer Tomotaka Okamoto. The Governor of Tokyo, Yuriko Koike, presented the Olympic flag to the President of the International Olympic Committee (IOC), Thomas Bach, who in turn gave it to the mayor of Paris, Anne Hidalgo. Meanwhile, on the esplanade of the Eiffel Tower, thousands of French people celebrated the arrival of the new Olympiad in Paris with the largest flag in the world.

“Tonight the curtain falls on a Games of emotion, in the middle of a pandemic. Although many of the tests have been held without an audience, the people of Japan have supported them. Thanks to the volunteers, these Games are the result of your efforts. The Tokyo flame will silently go out, but it will never be extinguished, “Koike said.

Bach, for his part, thanked the Japanese authorities and the National Olympic Committees for their efforts to carry out the Olympic event. “These Games have cost us an unprecedented effort to make them come true“He said, before giving a special gesture of affection towards the volunteers.” See you in Paris, see you soon, “he concluded.

After that, the athletes attended the shutdown of the cauldron, which will be turned on again for the premiere of the Paralympic Games. The Tokyo Olympics end and the Paris Olympiad begins.