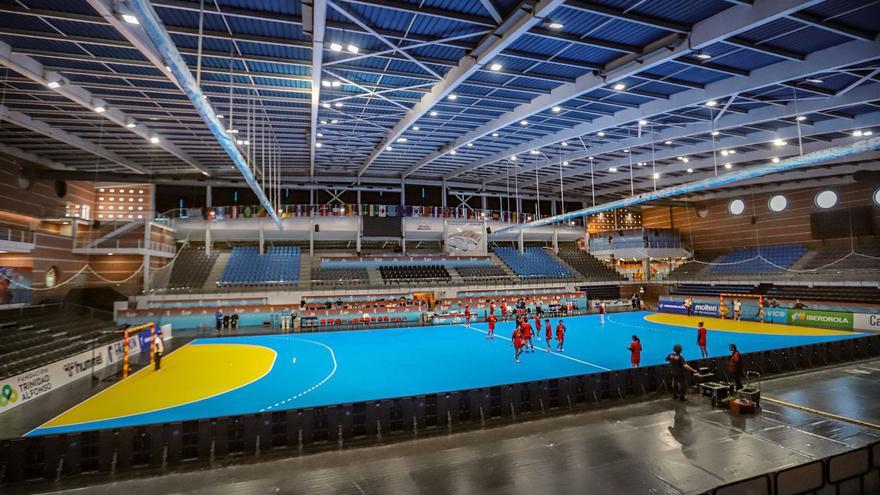 The Torrevieja Sports Palace is already wearing its best clothes to host, starting tomorrow, the Women’s Handball World Championship, which for the first time in history will be held in Spain. In addition, the salt city is going to be the headquarters where the Spanish «Guerreras» will play, which have in their ranks three players born in the province: Lara González (Santa Pola), Paula Arcos (Petrer) and Laura Hernández (Elche). Not forgetting that the national coach, José Francisco Prades is also a native of Petrer.

The court already wears the colors of the parquet on which the games will be played. The Chinese team was the first to train yesterday at the Torrevieja facilities, which have been decorated for the occasion and has a large arch with the World Cup logo and mascot at its entrance.

At first, the Spanish team, which is hosted at the La Finca de Algorfa hotel complex, was going to train yesterday at the Torrevieja Sports Palace, but arrived very late after playing the training tournament in Boadilla del Monte, in the one that was proclaimed champion after beating Slovakia (35-15), Poland (32-25) and Germany (23-22).

Entrance to the facilities of the Palacio de los Deportes. | TONY SEVILLA

Today Wednesday, starting at ten o’clock in the morning, the official reception of the «Guerreras» will take place at the Torrevieja Town Hall, with the presence of all the players and the national coach, José Ignacio Prades, who will be received by the Mayor, Eduardo Dolón, the Councilor for Sports, Diana Box, who was also an international handball player, and the President of the Royal Spanish Handball Federation, Francisco Blázquez.

At 5:30 pm, the inauguration ceremony of the new name of the Sports Palace will be held, which will be renamed “Tavi y Carmona”. Francisco Javier Pérez Rebollo «Tavi» and José Antonio Carmona «Carmona» are two civil servants with a long career in the Torrevieja Sports area since the late 1980s, who in the 1990s launched the management and promotion of sport in the salinera town, with the creation of sports schools or the operating structure of the Sports area in the city.

The first contact with the Spanish team’s court is also scheduled for this afternoon, which will open the World Cup tomorrow, Wednesday, starting at 8:30 in the afternoon, with the opening match against Argentina.

The Women’s Handball World Championship will count, for the first time, with the participation of 32 teams – until now there had been 24 – which will be divided into eight groups and four venues.

Groups A, with France, Slovenia, Angola and Montenegro; and group F, made up of South Korea, Denmark, Tunisia and Congo; they will play their first phase in Granollers.

The Valencian town of Lliria will host groups B, with Serbia, Russia, Poland and Cameroon; and E, with Hungary, the Czech Republic, Germany and Slovakia.

In Castellón the matches of the first phase of group C will be played, with Romania, Norway, Kazakhstan and Iran; and of group G, with Brazil, Croatia, Japan and Paraguay.

Groups D, with the Netherlands, Sweden, Uzbekistan and Puerto Rico; and the H, with Spain, Argentina, China and Austria; They will play their matches at the Palacio de los Deportes in Torrevieja.

In the saline town you can enjoy high-quality matches such as those of the Spanish team, the Netherlands, current World champion, who beat Spain in the 2019 final in Tokyo; or Sweden, which is another candidate. In addition, Torrevieja will also be the scene of the second phase, the “Main Round”, in which the points of the first are worth and which will decide which teams qualify for the quarterfinals. The matches of the fight for the title will be played in Granollers.