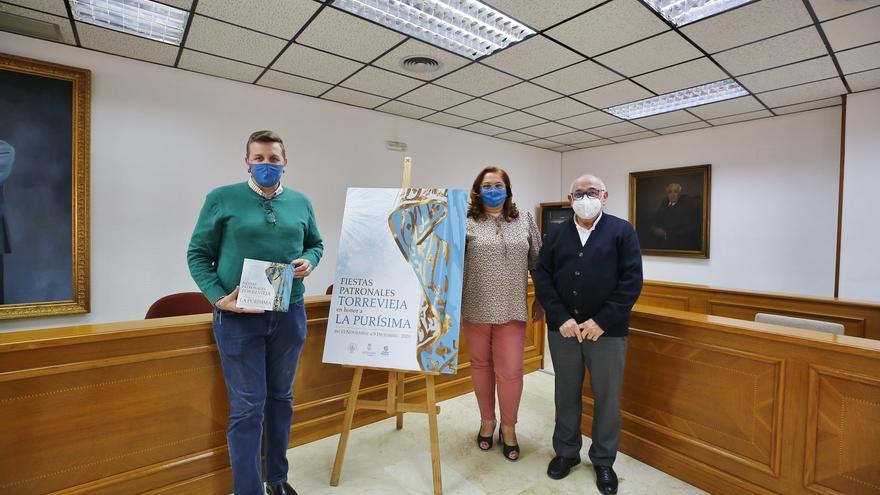 This Friday has been announced the program of activities that on the occasion of the Torrevieja Patron Saint Festivities in honor of La Purísima Concepción will take place until next December 9. The Councilor for Parties, Concha Sala, the parish priest of the Immaculate, Manuel Martinez, and the president of the Sons of the Immaculate Association, Antonio Aniorte, have announced the details of some parties that will suspend “their most classic and massive acts due to the restrictive measures of the health pandemic of COVID-19.” “Neither the Magna Procession, the floral offering, the paella contest or the festivities of the neighborhoods that had a great reception last year may be held. Neither will activities take place on the stage of the Plaza de la Constitución, children’s animations and other “, as clarified in a press release by the City Council.

For the 8th of December, the feast of La Purísima, the Department of Festivities has planned the traditional firing of a fireworks display and will offer logistical support to the different acts of veneration to the patron saint to be celebrated in the archpriest temple. In this sense, the president of Hijos de la Inmaculada, Antonio Aniorte, stressed that that day the Church will remain open for 12 hours uninterruptedly to visit the patron. Also on the 8th, due to the reduction in capacity, the number of Masses is increased to 6 services, at 9, 10, 11, 12, 18:30 and 19:30. After this last mass the vocal group Sette Voci will offer a “Serenade to La Purísima”. The image of the Virgin will be on the main altar with all its sculptural group, which has been restored. On the other hand, the religious acts will be completed with the Novenario a La Purísima, this year without food offering and a wake will also be made available to the faithful in the eastern courtyard of the Church, coinciding with the Floral Tribute.

Concha Sala has announced that most of the city’s schools will host, with all health security measures, the visit of La Charamita, with Lily, the Wolf and the Ogre and her troupe of big heads, with dulzaina and tambourine, who will perform the traditional touches.

Some of the most outstanding events that may be held this year 2020 will be the inauguration of the Municipal Nativity Scene in the Plaza de la Constitución on November 28 and, on November 29, the Christmas booths of local NGO’s will be opened, also around the same square. On the 29th the tree of the Nordic Community in the Plaza de la Constitución and will be inaugurated on Municipal Nativity Scene, made by the Association of the Sacred Heart of Jesus in the parish of the same name.

As the floral offering to the patron is not celebrated for December 4 and 5, the Department of Festivities, in collaboration with the Sons of the Immaculate and Civil Protection Association, will make the Levante patio of the Church of the Immaculate available to all citizens, to place flowers between 8 in the morning and 8 in the afternoon on the first day and between 8 and 12 in the morning, the second day . On the same day 5 in the afternoon, a Institutional Floral Tribute in the Church of the Immaculate, in which they will deposit flowers at the feet of the Purísima representatives of the parishes of the city, Hijos de la Inmaculada, security forces, health, municipal corporation and the Queen and Ladies of the Salt.

For the little ones, the Department of Festivities has scheduled for December 4 a recreation of the children’s story of “Frözen” and on the 5th two performances, at 12:00 and 18:30, of “Cantajuegos. The Circus of the Tallarín clown ”. Both shows to be held at the Municipal Theater. In this same venue on December 6 there will be a tribute to the singer Raphael entitled “Say what they say.”

The parish priest of the Immaculate, Manuel Martínez Rocamora, stressed that these will be “very special parties that we must live with a great sense of responsibility and solidarity.”

The parish priest of the Immaculate, Manuel Martínez Rocamora, stressed that these will be “very special parties that we must live with a great sense of responsibility and solidarity.”

The presentation of the events has also served for the Party Councilor, Concha Sala, to publicize a campaign called “# We will feel again” that will be distributed among the media and social networks. Likewise, the mayor announced that the program of events will not be distributed due to the massive suspension of activities that were already planned previously, although a broader program will be distributed, prepared in collaboration with Sons of the Immaculate, where, among other things, testimonies from Torrevieja who have overcome the coronavirus appear.

The holiday book includes a summary of the celebrations of last year and also, due to a time problem when modifying it, the acts that the council wanted to be held with restrictions, and that as this newspaper collected included festive events, with up to 500 spectators in El Acequión and the La Punta neighborhood, which have been suspended.