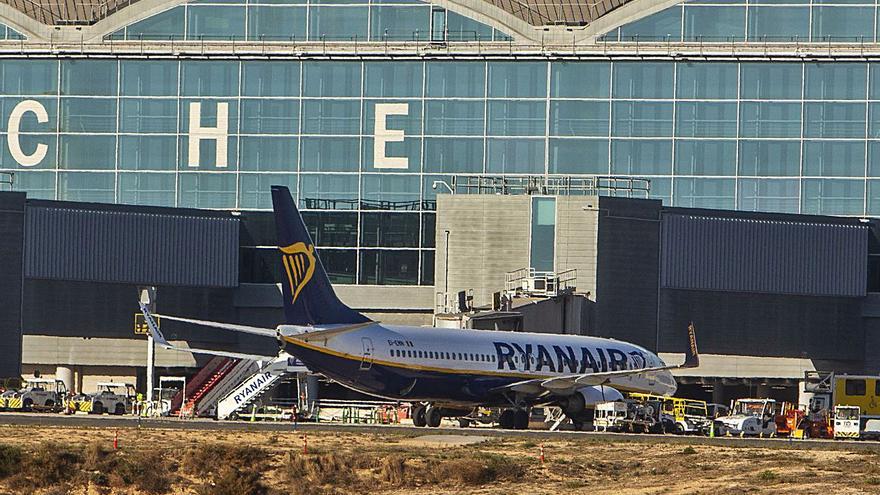 A group of British passengers entering the arrivals level of the airport. On these lines, passengers on a London-Alicante flight, yesterday. | RAFA ARJONES / DAVID COSTA

However, Aena staff and airline companies have recovered a bit of optimism, since since last Tuesday, coinciding with the reduction in quarantine for passengers entering the United Kingdom (from 14 to five days and without confinement total for people who prove a negative PCR), the flight schedule with the United Kingdom has increased. Yesterday, practically all the flights to and from Great Britain arrived with good occupancy levels. According to data from the Provincial Tourist Board, the airport plans to serve 44,974 British passengers this December, which, despite the COVID crisis and the drastic reduction in airline operations with Jet2.com, which has not operated again since August, they have remained in the majority. After them, the Spanish (32,404), the Netherlands (14,775), Belgium (13,958), Germany (10,214), Sweden (7,074), Ireland (2,079), Poland (1,850), Austria (1,440) and Portugal (996).

Traffic grows 66% at the airport in the weekend before Christmas

Encouraging figures, but that cannot hide the serious crisis that the tourist sector and the airport itself are going through, which has returned to the traffic numbers of the 80s. The director herself, Laura Navarro, pointed out this week in an organized forum by the College of Industrial Engineers of the Valencian Community, that the recovery of traffic will be directly related to advances in the control of the pandemic and, of course, the generalization of vaccines, which will allow to travel safely. All in all, the airport is not expected to regain 2019 traffic levels until the summer of 2022, with 2021 being a transition year.

For now, however, this week the airport has received two good news that can help to recover British traffic. On the one hand, that the United Kingdom has softened the conditions of travelers returning to Britain and, on the other, that Brussels has agreed that the regulations on air connections between the United Kingdom and the member countries are exempt from the agreement this month for Brexit, extending by six months, the period in which companies can operate as if they were community until there is a concrete agreement.

This affects all companies operating in the UK, especially WizzAir, Ryanair, Easyjet, Jet2.com and the IAG group. Something that can encourage the de-escalation after the already battered Christmas campaign, in which the open hotels will have to be content, it arrives, with 50% occupancy at Christmas and New Year’s Eve and, practically, with clients from the Community.