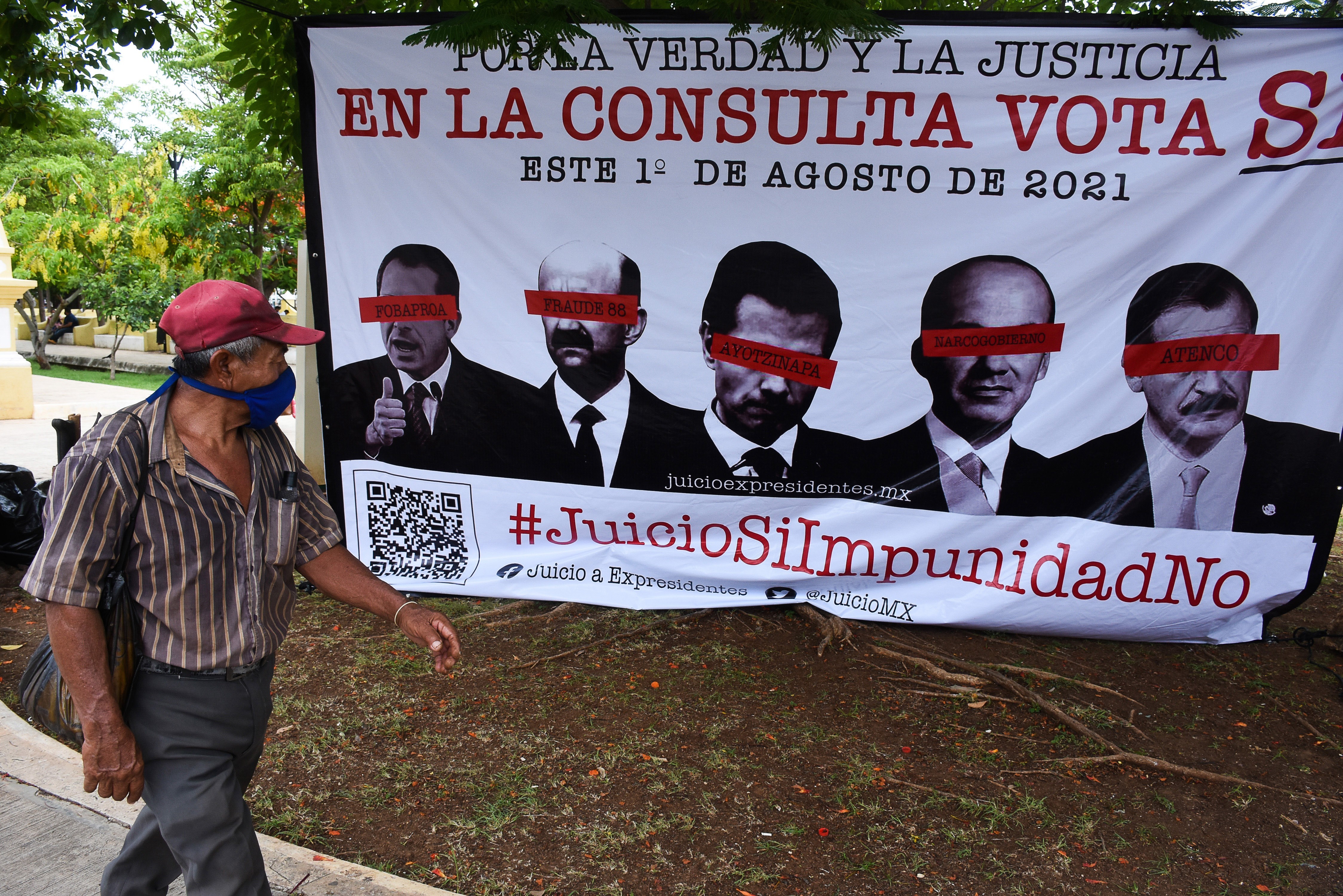 Plebiscites have been one of Andrés Manuel López Obrador’s favorite tools. “We are going to ask the Mexicans,” the president has repeated on issues as diverse as the construction of two trains, a refinery, the viability of 10 social programs or the reversal of a new airport. The next appointment will be on August 1 with the controversial consultation to investigate the former Mexican presidents. In terms of substance and form, it is the most important initiative so far this six-year term. It has been a long and curvy road, with changes of date, question and the umpteenth open front with the National Electoral Institute (INE). The result is a query full of doubts, with an extremely ambiguous question that opens the door to a range of interpretations and different political uses of the results that threaten to distort any legal effect.

Unlike the other plebiscites held during the six-year term, informal and organized consultations outside the legislation, this will be the first time that the requirements established by the Constitution have been met in order to make the decision binding. The announcement of the initiative dates back to November 2018, before even taking office, at which point López Obrador pointed directly to the possibility of “having the five former presidents on trial”: Carlos Salinas, Ernesto Zedillo, Vicente Fox , Felipe Calderón and Enrique Peña Nieto. After the starting gun, the proposal was mutating along the way until it met the legal requirements.

The first objective, to achieve the 1.8 million signatures necessary for the consultation to enter the public channel, was soon discarded despite the activation of Morena’s logistical resources. In September 2020, the president took the initiative and took the process to the Senate himself. The second setback came with the date of the call. The last constitutional reform, paradoxically approved by the majority of Morena, established August 1 as the date for the consultation. But López Obrador tried another lurch in a new change that sought to make the call coincide with the midterm elections of June 6, but his party did not achieve a sufficient majority for another constitutional reform. “The president wanted to get on the campaign. When this was not achieved, the pressure on the Supreme Court and the INE began until in the end something somewhat bizarre was left ”, points out the ITAM professor and expert on the intersection between politics and law, Julio Ríos.

The design of the question in the mechanisms of semi-direct democracy, such as referendums or plebiscites, is crucial. It must be clear, simple and explicit. Very remote conditions in this case after passing through the mandatory filter of the Supreme Court of Justice, which rejected the original wording that spoke directly of judging the former presidents. “The first question was openly unconstitutional because Justice cannot be submitted for consultation. It violated judicial independence and violated the rights of the victims, ”says Javier Martín Reyes, CIDE professor and specialist in constitutional law. “What the Court does is read between the lines and interpret what the president wanted to say to save constitutionality,” he explains.

In the final wording, the mentions to the former presidents and the judges disappear. “The mandate is now directed to the executive branch, which is the actor at stake in the consultations, but through a vague and imprecise wording,” adds Martín. The final wording is this: “Do you agree or not that the pertinent actions be carried out in accordance with the constitutional and legal framework to undertake actions to clarify the political decisions made in recent years by political actors, aimed at guarantee justice and the rights of potential victims? “

The key part of the question, according to specialists, is “clarification actions.” The most generalized interpretation from civil society is that it is an allusion to the so-called transitional justice, that is, the creation of truth and justice commissions. A mechanism extended in much of Latin America, dedicated to responding to generalized violations of human rights through initiatives of recognition, memory and reparation by the State, and that was part of the initial promises of the president before the endless wound of the called the war on drug trafficking.

“They are very complex processes, even more so in a country where the problem of organized crime continues. It would be very difficult to put an end to it and establish the mechanisms for repairing the damage and guarantees of non-repetition ”, points out Hugo Concha Cantú, researcher at the UNAM Institute of Legal Research. In any case, more interpretations are derived from the ambiguity of the question. “The creation of a truth commission is one of the options, but there are also merely administrative decisions to evaluate the past,” adds the CIDE constitutionalist. Low-profile actions that the Secretary of Public Function could carry out with sanctions such as the recent disqualification of the former Secretary of the Treasury, Luis Videgaray. “The ambiguity – Martín Reyes continues – is completely deliberate to cause them not to vote on anything in particular and allow the president to do whatever he wants according to his political interests.”

Ambiguity has also been very present in the messages of López Obrador himself since he won the elections. While announcing the consultation to judge the former presidents, on the other hand, it was signaling a kind of amnesty. “Revenge is not my strong suit and I do not think it is good for the country that we get bogged down in pursuing alleged corrupt people,” said November 2018. The president even announced that he would vote for “no” in the consultation, while that in the text he sent to the Court to justify the plebiscite, Salinas and Fox were explicitly denounced for “electoral fraud”, Peña Nieto for “generalized corruption” and Calderón for “government practices that led to an increase in violence.” In parallel, during these three years the justice system has opened corruption proceedings against high-ranking officials of the PRI – the cases of Emilio Lozoya and Rosario Robles – which, for the moment, remain stagnant in the courts.

For the CIDE jurist, the meditated ambiguity has to do with “continuing to maintain control of the agenda thanks to an issue that makes him very popular and allows him both to legitimize himself in the face of a hardening of criminal proceedings against politicians from previous governments, and also justify a slowdown ”. And above all, “strengthen itself before the revocation of the mandate, which is its true priority.” In 2022 a new plebiscite is planned, this time to resolve the continuity of the president. An initiative on which López Obrador intends to make the final stretch of the six-year term gravitate. The almost electoral use of this year’s consultation as a test of its mobilization capacity is also pointed out by ITAM political scientist Julio Ríos: “It is a measurement of the size of the hard core of the obradorismo. Because in reality he knows that he will not go through the high threshold of participation that is required. Something that, presumably, he will also use to continue beating the INE ”.

Conflicts with the INE and the wall of participation

The legal requirements establish that for the result to be binding, a participation of at least 40% of the electoral roll must be registered. A very high threshold, compared to the turnout, for example, in the last midterm elections, which, at 50%, was one of the highest in Mexico’s recent history. “It is a high threshold, which together with the ambiguity of the question and the proximity to the last elections can cause a tiring effect,” says Concha Cantú.

The INE has demanded more budget to organize the consultation and has announced that it will only install a third of the “receiving tables” compared to the polling stations of a month ago. The INE’s complaints, formally rejected by the Supreme Court, have also provoked a new front against one of the organizations that are most often targeted by López Obrador, considering it part of that kind of old regime that his government aspires to close. A cocktail of political interests and legal inconsistencies that for Martín Reyes lead to the consultation “to failure, confirming that this is more of a simulation.”