MACON, Georgia (41NBC/WMGT) – A hot and humid pattern is taking over Middle Georgia for the first week of July. 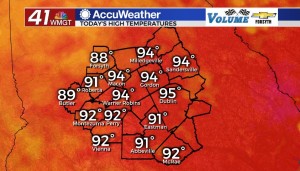 Over the weekend we saw afternoon sunshine make a return following a cloudy week. We also saw storms during the afternoon and evening scattered around Middle Georgia. That trend is continuing into today and the first full week of July, allowing high temperatures to climb back into the mid 90s. With dewpoints mainly expected to be in the lower 70s this week, heat indices will be in the triple digits for much of the region. For today, highs around Middle Georgia will climb into the low to mid 90s. Heat indices are anticipated to reach the upper 90s and lower 100s. 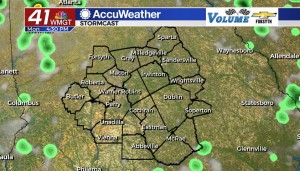 Storms will likely begin to fire up during the lunchtime hours today, however early on they will be very isolated. The sun will continue to dominate into the later afternoon hours when mid-level cloud fields take over. More storms will begin to fire up during the later evening hours, so anyone with plans for fireworks shows or evening BBQs should prepare for some possible inclement weather. Storms can bring heavy rain, small hail, relatively strong wind gusts, and frequent cloud to ground lightning. 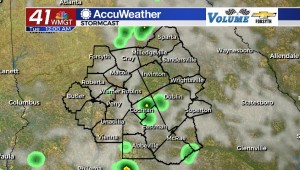 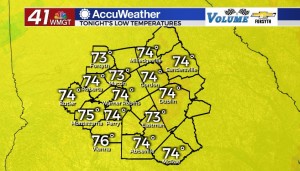 Storms are likely to persist into tonight as models are hinting at a few still lingering by midnight. We should see the storms taper off completely by 3-4 am. Most of the clouds will clear ahead of tomorrow morning, however the overnight rain could easily lead to widespread patchy fog around the region. Overnight lows will drop into the low to mid 70s. 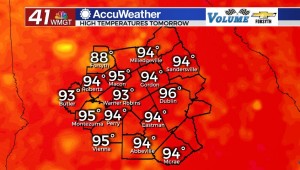 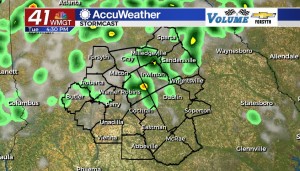 We will see plenty of sun once again as we roll through the day tomorrow. Cloud fields should begin to form earlier on than Monday, likely forming ahead of the lunchtime hours. Highs will be in the mid to upper 90s for most of Middle Georgia with heat indices reaching into the lower 100s. Storms will begin to fire up during the lunchtime hours, becoming more widespread throughout the afternoon. 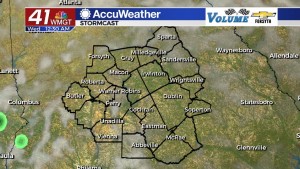 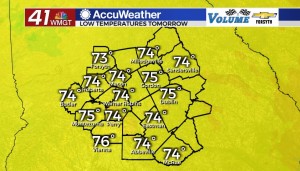 Unlike Monday, however, storms are not anticipated to push into the overnight hours. A couple of showers may linger heading into the night, however. Cloud cover will quickly clear once the sun sets, giving us mostly clear skies through the majority of the night. Lows will be in the low to mid 70s and winds will be mostly calm. 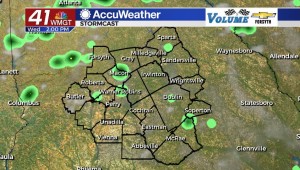 The current pattern will carry into Wednesday as highs reach towards the triple digits in some spots in Middle Georgia. Heat indices could be pushing 110° in some spots. More afternoon and evening storms are likely under partly sunny skies. Clouds that fill in during the afternoon will clear out once the sun sets and outside temperatures cool.

We should see our high temperatures level off in the mid to upper 90s for most of the region for the rest of the work week. As of now, models are hinting at a bit of a cold front and a cool down over the weekend.

In terms of the tropics, there is no activity forecast to take place over the next 48 hours. 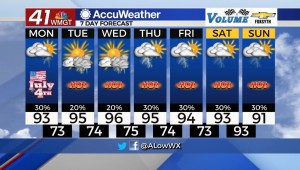 Follow Meteorologist Aaron Lowery on Facebook (Aaron Lowery 41NBC) and Twitter (@ALowWX) for weather updates throughout the day. Also, you can watch his forecasts Monday through Friday on 41NBC News at Daybreak (6-7 a.m.) and 41Today (11 a.m).