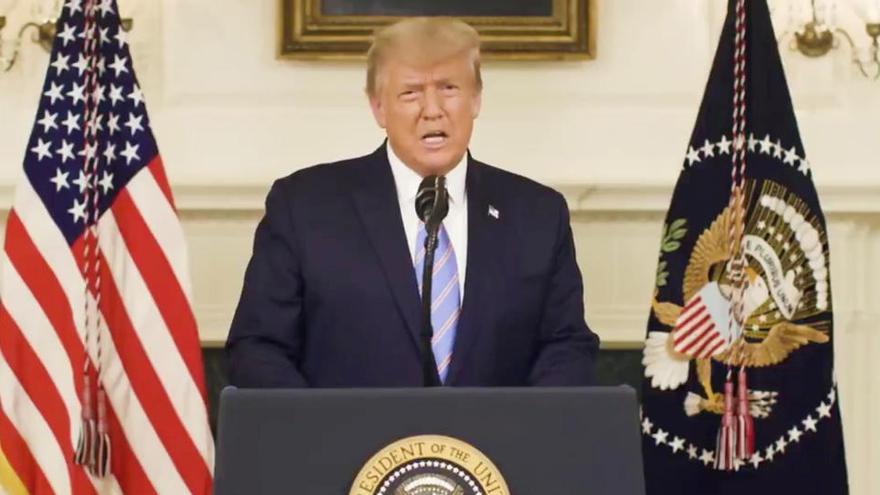 More than two months after the election, the outgoing president of the United States, Donald Trump, recognized this Thursday his defeat in the elections, faced with the threat of impeachment proceedings against him for instigating the assault on the Capitol the day before by his followers.

In a video posted on his official Twitter account, Trump finally issued the message about the elections that half the country had been waiting to hear for two months, and condemned the attack on Wednesday that Congress had been demanding from him for more than 24 hours.

“Congress has certified the result (of the elections). A new Administration will come to power on January 20. Now I will focus on ensuring a smooth, orderly and smooth transition of power,” said the outgoing president.

“This moment calls for healing and reconciliation“said Trump, a day after inciting thousands of his followers to march to the Capitol to try to interfere in the process of ratification of the electoral result.

His message came just two months after the mainstream media reported the victory of Democrat Joe Biden in the November elections, and after an unprecedented campaign to sow mistrust in the results, which he called fraudulent without providing evidence.

Condemns the “atrocious attack” on the Capitol

The outgoing president began his video referring to the “atrocious attack on the United States Capitol” and declared himself “outraged by the violence, illegality and chaos.”

“The protesters who infiltrated the Capitol have desecrated the seat of democracy. To those who were involved in acts of violence and destruction: you do not represent our country. And to those who broke the law: they will pay for it,” he stressed.

Trump’s speech was in stark contrast to the one he delivered while his supporters vandalized the Capitol on Wednesday, when he took more than two hours to ask them to leave Congress and did so by saying, “We love you, go home.”

Trump also justified the violence in a tweet on Wednesday, prompting Twitter to suspend his account for 12 hours, which the outgoing president did not use again until he posted the video on Thursday.

The outgoing president called for “restoring calm,” but later defended his crusade against the election result that has inflamed tensions in the country: “My only goal was to ensure the integrity of the vote, I was fighting to defend American democracy.”.

“To all my wonderful fans: I know you are disappointed, but I also want you to know that our incredible journey has only just begun,” he concluded.

Trump released the video after Democratic congressional leaders clamored for his impeachment Thursday.

“I urge the vice president (Mike Pence) to immediately remove the president by invoking the 25th Amendment. If the vice president and the Cabinet do not do so, Congress may be prepared to move forward with an impeachment,” said the Speaker of the House. Lower, Democrat Nancy Pelosi, at a press conference.

In order to invoke the 25th Amendment to the US Constitution, which Pelosi mentioned, Vice President Pence and a majority of the cabinet would need to vote to remove Trump, citing his inability “to exercise the powers and duties of the office”, in a step without precedents.

In a press conference, the leader of the Democratic minority in the Senate, Chuck Schumer, revealed that Pelosi, and he had called Pence to convince him to invoke that amendment to remove Trump, even though there are only days until the inauguration of Trump. Biden, next January 20.

“We were on hold (on the phone) for 25 minutes, and then we were told that the vice president would not come on the phone, so we are making it public, because he should do it and do it immediately (invoke Amendment 25),” Schumer said.

Several members of Trump’s cabinet have informally discussed the possibility of invoking that amendment, but Pence is opposed to initiating that impeachment process, The New York Times reported Thursday, citing sources close to the vice president.

The controversy over the assault on the Capitol has already caused two resignations in Trump’s cabinet: those of the Secretary of Transportation, Elaine Chao, and Secretary of Education, Betsy DeVos; to which are added a dozen officials from the White House.

Meanwhile, voices are growing among Republicans critical of Trump’s conduct.

One of them is one of his main allies in Congress, Senator Lindsey Graham, who regretted that Trump’s achievements in these four years have been overshadowed by what happened on Wednesday.

The assault on the Capitol “will be an important part of his presidency. It is a self-inflicted wound. It was going too far,” Graham said.

For his part, the Republican governor of Maryland, Larry Hogan, was more forceful and assured that Trump should be removed.

“I think there is no question that the US would be better off if the president resigned or was removed from office, and if Mike Pence, the US vice president, led a peaceful transition of power for the next 13 days until President Biden swears in,” projection.

In parallel, the investigations into the events in the Capitol are advancing and this Thursday the acting US attorney general, Michael Sherwin, did not rule out that Trump could be prosecuted.

Asked by a journalist whether they were conducting inquiries into Trump’s role, Sherwin replied: “We are looking at all the actors here and at everyone who had a role, and if the evidence fits the elements of the crime, they are going to be accused “.