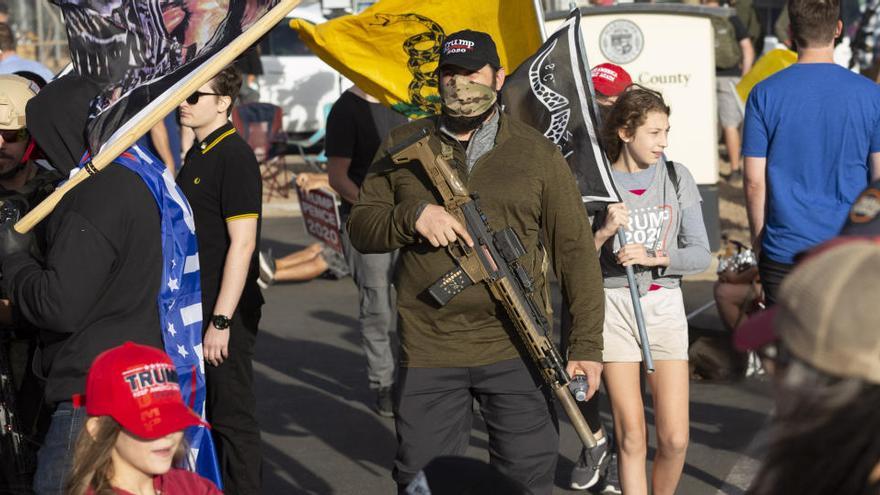 Not everything is parties, celebrations and shouts of joy with the defeat of Donald Trump in elections, as in New York, Los Angeles or Washington DC The other USA, the ‘deep America’, has taken to the streets with massive protests before the media projections that give as the winner of the presidential elections to the democrat Joe Biden.

A clear example is the manifestation of more than 2,000 Trump supporters in front of the Arizona State Capitol in Phoenix. Collective slogans; “It is the fault of the false media”, “he is going to be re-elected” and “we will fight to the end”, presage that uncertainty and civil unrest may follow Biden’s victory.

And they also denote that Trump’s voter base does not and will not accept the election result: words “fraud“, “corruption” Y “robo“They were on the lips of absolutely all those attending that protest, encouraged by the comments in that line of the president, from the White House.

The atmosphere that is breathed in the demonstration is tension, anger, and even despair before the idea that a “communist” politician like Biden, according to them, will rule the first world power.

This is what the Latina Beatriz, a woman in her 60s, who wears sunglasses, a Texan-style hat with the image of the outgoing president and a mask with the American flag that reads “Trump 2020”, comments to EFE.

“I am very angry, very angry because They stole it (the elections) (…) We have no law, we are communists“, he says, in Spanish, while the crowd exclaims” USA, USA! “(USA, USA!).

Like her, hundreds of people express their dissatisfaction loudly, with episodes close to madness. A collective madness.

The tense atmosphere is compounded by a high presence of weapons. Rifles, shotguns, pistols and even knives, as EFE could see.

This cocktail party causes most local correspondents and journalists to carry one or two bodyguards who follow them everywhere, after several episodes of reprimand by the most radical followers of the outgoing president.

“I’m not going to do anything, but we must be warned against the ‘antifa“A man whose face is not seen and who does not want to go on camera comments to EFE.” Long live the US, “he says goodbye, exclaiming and smiling.

Faced with this situation, an organizer of the Trump campaign who did not want to reveal her identity tries to reassure a group of journalists by assuring that “deep down, they are good people.”

The main reason that all Trump supporters argue for why they “hate” Biden, who in his long tenure as senator was one of the most moderate in the Democratic Party, is because, according to them, will bring “socialism” to America; a belief that has been instigated from the Trump White House.

“I am here because I believe in the republic of the United States and I think that the Democrats represent socialism. I do not agree because it has been in many countries of the world that does not work“Another Latino, who prefers not to reveal his name, tells EFE.

Before agreeing to speak, the 35-year-old Hispanic questioned EFE about his origin and intentions because “the US media has destroyed the country and is pure scum“.

The latent exasperation of Trump’s followers at the result of the elections projected by the majority of the country’s media envisions complicated, long days with possible unrest in the other USA, the “deep America” ​​in which the outgoing president has more pull.