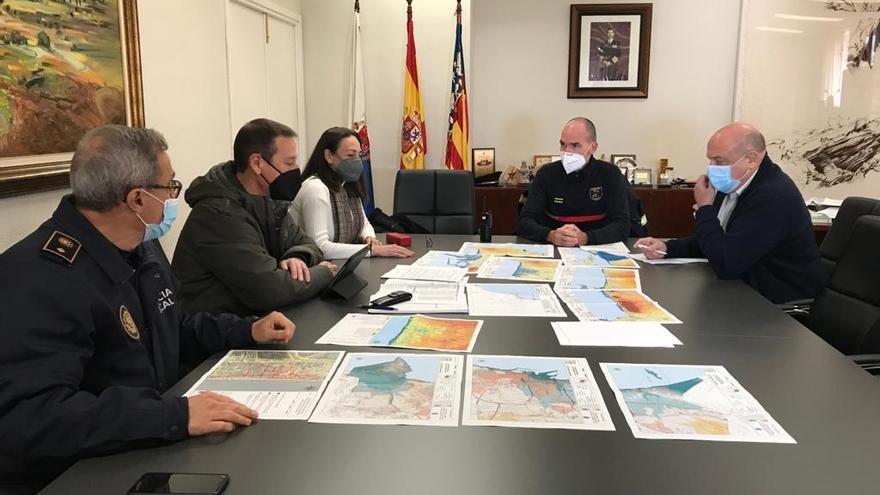 The security forces of the Alicante Town Hall have made this morning for the first time a tsunami drill. The start occurred at half past ten in the morning when a notice arrived from the Valencian government, informing that an earthquake of magnitude 7.9 has occurred on the coast of Italy, and warning that it could reach the coasts of the Valencian Community between 1:20 and 1:40 pm, according to the Department of Security.

The mayor of Alicante, Luis Barcala, has activated Territorial Municipal Emergency Plan in its Emergency Level I, and have mobilized members of the Local Police, SPEIS Firefighters and the Department of Civil Protection and Emergency Management, as well as the different media and municipal councils forming the Municipal Operational Cooperation Center -CECOPAL –

Likewise, through the municipal press office and with the different digital media and social networks, the population has been informed of the tsunami risk warning, informing that in the face of the danger and emergency decreed in situation 1 by tsunami throughout the coast of the Valencian Community The Local Police and the SPEIS Firefighters have begun to evacuate the public road near the sea coast, and the population in a preventive way to safe points out of the reach of the waves.

In addition, people who live on lower floors in a strip of 500 meters from the beach near the coast have been asked to move to higher floors, or to places far from the coast looking for higher points in the city. And finally, it has been indicated that the coastal corridor was cut off to traffic by the Local Police, and it has been asked to avoid travel by vehicles and not circulate.

This exercise on early warning and communications in the event of tsunamis has been organized by UNESCO’s intergovernmental oceanographic commission, and coordinated by the Valencian Agency for Security and Emergency Response (AVSRE).

The head of Civil Protection and Emergency Management, Gloria Martínez, has reported that Alicante is one of the municipalities of the Community that has “seismic risk categorized as high risk, and that it is contemplated in our emergency plans with cartographies that today have been used for the simulation of the plan put in place “.

From Emergency Management it has been explained that this morning, with the notices that have been received, “the population has been alerted, and the means have been activated to respond in time, resources and actions to carry out an emergency in a real situation of tsunami, activating all the Security bodies coordinated by the Mayor of Alicante through CECOPAL ”.

The exercise carried out by the Alicante City Council has consisted of a practical communications maneuver to see the response and decision-making, and above all to act and evacuate vulnerable coastal areas and put all the resources on the street and in motion, analyzing with mapping which areas and how they could be affected, to clear them depending on the type of wave.

Gloria Martínez has stated that “the SPEIS firefighters They would collaborate in all the rescues together with the Police and the Civil Protection media, as well as the rest of the municipal media with the Social Action area to respond and carry out the intervention in a very coordinated way, afterwards the damage would have to be evaluated and the consequences of response to the emergency, as well as the reconstruction of the affected areas, the replacement of basic services and assess the damage to make a return to normalcy as soon as possible ”.

The objective of this exercise, which is being carried out for the first time in Alicante, involves testing the effectiveness of the devices and systems for receiving warnings transmitted to the Generalitat Emergency Coordination Center, as well as establishing systems for prompt information notification, related to tsunami risk. From the City Council they report these practices and simulated exercises to avoid confusion, as well as alarm among the population.

The Councilor for Security, José Ramón González, thanked the security forces “for the efficiency in the rapid response to the tsunami warning and the rapid dissemination of warning messages, which has led to prompt decision-making, and increased response capacity to face an emergency of these characteristics, managing to improve coordination, intervention protocols and how we should act in the operating procedure ”.

A tsunami can be triggered by earthquakes, volcanoes, underground coastal landslides, large explosions, and these waves spread rapidly in all directions from their place of origin. Normally, the most devastating tsunamis are caused by earthquakes that, depending on the location of their epicenter, will be more or less damaging. The closer the epicenter is to the coast, the shorter the tsunami will take to reach the coast, resulting in more damage as there is less time to evacuate the area.

The Head of Security of the Alicante City Council, José María Navarro, has positively valued the simulation exercise, and explained that the “mayor has activated the Territorial Emergency Plan, the CECOPAL has been established in the premises of the Local Police and they have verified the communication and transmission systems to all the members, officials and heads of services of the different dependencies of the City Council “.

The Alicante Local Police Commissioner, Eduardo Guijarro, has indicated that “one of the main functions of the Local Police in an emergency situation due to a tsunami, is to perimeter the affected area according to the magnitude of the wave, thus preventing circulation of people and vehicles, and transmit the messages to the population arriving from CECOPAL, as well as collaborating with the SPEIS firefighters to evacuate the affected area ”.

“The drill that took place today, the wave entered the San Juan beach area and also affected the Albufereta area. In this situation, from Civil Protection they provide us with maps taking into account the altitude of the land to be able to cut the roads and thus avoid the least possible risk for citizens, ”said the commissioner.

In addition, the SPEIS Fire Chief, Carlos perez, has defended that “before a tsunami warning, the main function of firefighters is to evacuate the lowest areas and plan the rescue of people who have been trapped in places flooded by the wave, through our light boats.”

After this drill, the Alicante City Council will carry out an analysis and conclusions document that on March 11 will be informed with a critical analysis in a conference with the Generalitat Valenciana to verify the response and improve it, analyzing errors and emergency protocols.