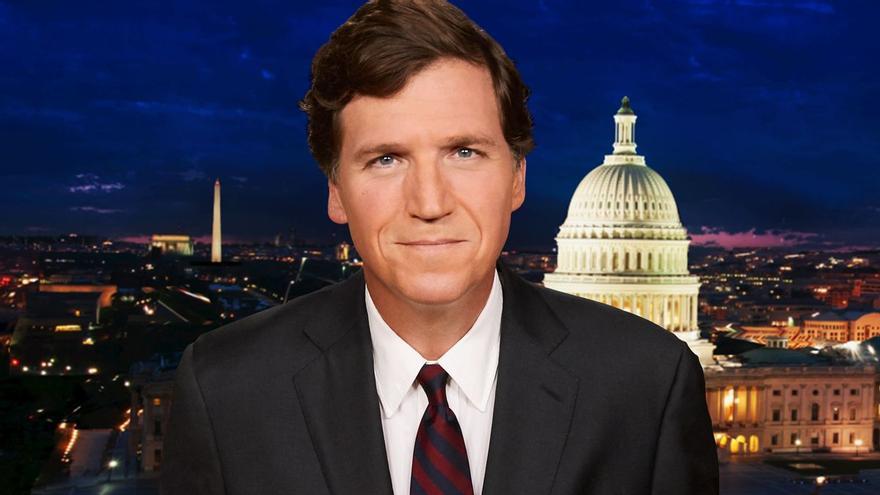 The son of a journalist who Ronald Reagan put in charge of ‘Voice of America’ and a long career in the media, from ‘CNN’ to the founding of the extremist medium ‘The Daily Caller’, Carlson is to the 52 years the brightest star of Fox News and the entire media ecosystem of the right and the extreme right. This same week it was defined in ‘Time’ as “the most powerful conservative”Of the country and in ‘The Washington Post’ as“the voice of whites’ complaints”. Their three million daily viewers In his nightly program, to which he has added millions more on YouTube and for three months the followers in a morning space on the ‘Fox’ streaming platform, make him financially fundamental and professionally untouchable in Rupert Murdoch’s company, although some of its more inflammatory statements have been boycotted by some big advertisers.

“Talented“Is one of the adjectives that are used the most and best define Carlson, either to accompany his definition as”communicator“Or, very frequently also, that of”demagogue”. And if something agrees, it is also in its unstoppable power in the conservative movement. “Nobody has more weight in Republican and conservative politics, nobody,” Jeff Roe, a Republican strategist, told ‘Time’. “Does not react to the agenda, sets the agenda”. The same was assured to the ‘Post’ Christopher Rufo, a conservative researcher: “Tucker frames the narrative for conservative politics. He does not react to the news, he creates the news ”.

Rufo knows in the first person what he is talking about. It was on September 1, 2020, when he went to Carlson’s program to report the Critical Race Theory, an academic framework that began to develop more than 40 years ago and whose core idea is that race is a social construct and racism is not a mere product of individual prejudice but something intrinsic to legal and political systems. 22 days later, Trump issued an executive order to try to eradicate it from the federal government and from charities or any institution that had contracts with Washington.

Joe Biden canceled that order upon arriving at the White House but the social and political war on Critical Theory of Race does not has done but fierce, and Carlson, who has masterfully read how culture more than politics has become the organizing principle of conservatives, is largely responsible.

A few days ago, when the general who presides over the Board of the General Staff defended the study of the Critical Theory of Race at the West Point military academy, arguing that it is It is necessary to understand the origin of “white rage” who has been identified in the assault on the Capitol, Carlson called the military man, Mark Milley, “pig”. It was one more drop in a glass that you filled with nativist and racist messages applauded by white supremacists.

In that litany he has included from the replacement conspiracy theory which posits that elites want to change white Christians with minorities to insults to immigrants (“They make our country poorer, dirtier and more divided,” he said on his show). Also, accusations that the movement ‘Black Lives Matter’ es “veneno” or claims that black activists “and their white allies” are promoting “race hatred” and a race war. “How do we prevent the country from becoming Rwanda?” He asked one day on his program.

There is much more. Carlson also insists on defending Derek Chauvin, the cop convicted of George Floyd’s murder (or in his words “St. George, the convicted violent criminal who apparently died of a fentanyl overdose”). Ha questioned the efficacy of vaccines against coronavirus and has even said that forcing children to wear masks is “child abuse.” She has attacked feminism (or, in her words, “the feminist shit”). It also feeds the economic populism and the anti-elitism of the far right that now defines the Republican Party and feeds and enacts all kinds of conspiracy theories. He has assured, for example, that “FBI operatives organized the attack on the Capitol” and recently accused the National Security Agency of spying on him to get ‘Fox’ to take away his program.

Carlson hides that his is entertainment, an argument that his lawyers came to defend in a trial and that was supported by a judge appointed by Trump, who assured that “the general tone of the program should make the viewer know that Carlson is not giving data on the topics he talks about but doing exaggerations Y comments “that should not be taken at face value. But this is exactly how feeds fear and divisions, using half truths, rejecting history or science or data and always hiding in that it only asks questions. It is something that Joseph Azam, an executive who left News Corp, has defined as “corrosive”. “It is a very effective way of communicating with a segment of the population that does not know what to think but does not want to be told what to think,” he told the ‘Post’.

Others also warn of the dangers of Carlson, who in addition transform any discussion into a debate about censorship and freedom of expression. He did it in ‘Salon’ Jennifer Mercieca, an expert in rhetoric. “It rests on war rhetoric at the same time that he speaks to his audience of what he describes as ‘war rhetoric’ against them ”, said the expert. “It is propaganda really irresponsible and dangerous”.