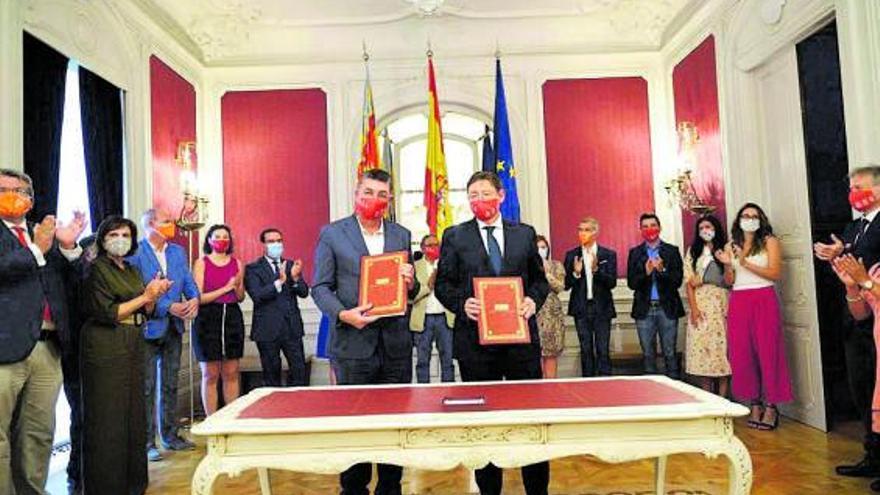 This counterattack position to the proposal of the head of the Consell It contrasts with the trajectory until just a few months ago of both parties on the right. Both signed in August 2020 the Political Pact for the Social, Economic and Health Reconstruction in front of the covid-19, emanated from the Courts. This says in point 1.5 (page 22) on «Tax justice and redistribution. Fight against tax fraud and territorial inequalities ”:“ The unfair use of territorial inequalities reduces the necessary public resources at times such as the crisis experienced. That is why we must insist on the establishment of a tax minimum territorial to put an end to the so-called fiscal dumping ”.

It also adds: “It is necessary to prevent own resources from continuing to decline as a consequence of tax fraud that they can realize the great patrimonies changing of fictitious residence to save the taxes of estate or inheritance».

This position has nothing to do with that expressed in recent days by the president of the PPCV, Carlos Mazón, or the regional coordinator of CS, Maria Muñoz. «It cannot be understood that [Puig] ask to Madrid raise taxes when what you have to do is lower the tax burden. These are the numbers. The rest is something else, “said Mazón in a video in response to the proposal of the head of the Consell.

«They call free tax dumping exercise of competence that each territory has to reduce the taxes assigned such as Successions and Donations, Patrimony and the autonomous part of personal income tax. But Puig, the incompetent, prefers to raise these taxes to the Valencians, “he wrote Muñoz this week at Valencia Plaza.

There is a wide distance between this proposal of the deputy and the amendment to the budgets of this year that the former leader of Cs Toni Cantó he made a pact with the Socialists and signed. This proposal entailed a slight tax reduction for the most humble (from the rate of 10% applicable to annual incomes lower than 12,450 euros to 9.5%) and a slight increase for those who earn the most: from 24.5 to 24.75% to incomes between 65,000 and 80,000 euros, for example. The amendment did not go ahead because the members of the PSPV did not like the image of an agreement with Cantó, today a senior position in the Government of Madrid.

Between those 2020 documents and today, several events have happened. Isabel Bonig has fallen into the command structure of the PPCV and Mazón occupies that place. And, above all, the overwhelming victory of Diaz Ayuso in Madrid with its message of freedom and less tax pressure, something that the socialists denounce is relevant especially in large fortunes and serves to attract capital from other territories. The Madrid president was in 2020 an important conservative benchmark. Today it is the model of a way to win over citizenship. The effects of this can produce inconsistencies with close agreements, but it is already known that in politics the affirmations do not last long.