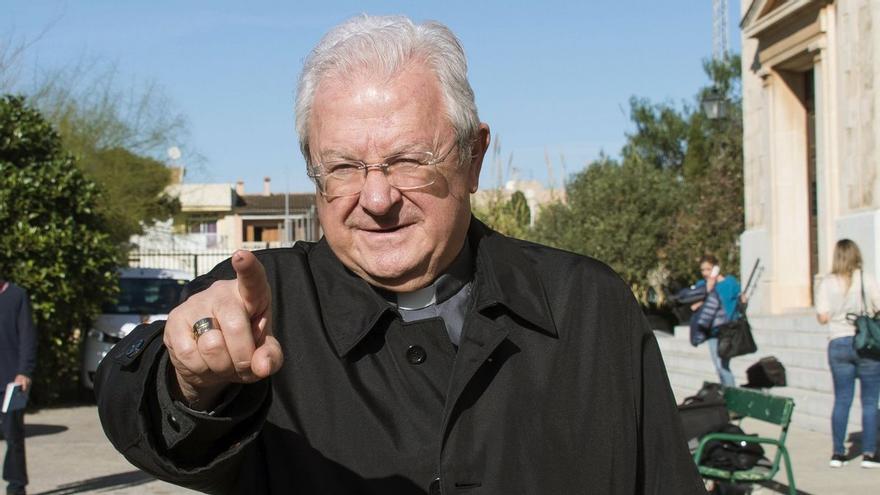 It was December 2015 when Javier Salinas, then bishop of Mallorca, was preparing to face a question in the street that a Spanish prelate had never had to answer:

–Monsignor, are you in love?

The point-blank question unraveled the questioned person, who improvised a disorderly refusal. And yet the amorous curiosity was justified in the first appearance of the head of the diocese, after ‘Diario de Mallorca’ published that ‘The Vatican investigates the bishop’s link with a married woman’. On that same outing, the prelate also clumsily tried to explain the rings they both shared, and which he attributed to belonging to the same prayer group with two members. Five years later, dozens of journalists stalk Xavier Novell to answer the question that he has already revealed to his inner circle, is he in love?

It is necessary to rescue the Mallorcan precedent in the light of the Xavier Novell’s adventures in the diocese of Solsona, since Salinas was also removed by the Vatican. The particularity of the previous case is that the complaint of the situation came from a distinguished parishioner, the aristocrat Mariano of Spain, who accused his bishop of breaking up his marriage after having “abducted” his wife Sonia Valenzuela, to drag her into “an improper relationship.” What’s more, the prelate had appointed her his private secretary in the episcopal palace, from where the appointee had exercised remarkable power.

The literal quotes about abduction and intimacy of the relationship correspond to the extensive reports that the husband presented in person to the Nunciature, with an ambassador of the Pope astonished at the bulky documentation that was attached. The whistleblower also forwarded the information to Rome, with personal letters to His Holiness detailing his perspective on the triangle. Salinas was summoned urgently after the initial charges to the Vatican, where he had to explain himself for four days. The ‘Novell case’ is complicated by his ultramontane pronouncements, and by the hostility of the flock, which in Mallorca was simple indifference.

The bishop’s private secretary was a senior PP position in the past decade, as general director of the Palma City Council, at the head of the Education area in a municipality of half a million inhabitants. Also Novell’s alleged infatuation has been directed towards a woman with public screening.

To complicate the relationship, Bishop Salinas disappointed the parishioner after eating his meat and drinking his wine. The prelate had been a frequent guest, with the right to maintenance and bed, in the emblematic Pastorix estate in Valldemossa. In fact, Mariano of Spain’s suspicions solidified when the bishop officiated the silver wedding anniversary of the marriage on his country estates. Husband and host was alarmed when listening to the one-sided talk of the prelate, who sang the delights of love as if the couple married for 25 years consisted of only one person. The husband felt split, just as an unpleasant protagonist is cut out from a photograph.

The husband spared no means, including the hiring of detectives, to demonstrate the diabolical conjugal “abduction”, of which he was convinced. Although the story ended with a confrontation between the couple before the judicial pacification, Mariano of Spain always excused his already ex-wife, to vent his anger against the prelate who would have abused his spiritual pre-eminence.

The official explanation of the relationship between the bishop and his private secretary was not only that they catered to the needs of the diocese, but also that theological advisory work was carried out. Educational meetings were held at untimely hours. The photographs provided showed Salinas opening in person and in a tracksuit the doors of the Episcopal Palace with dissimulation, to receive his guest. This role of intellectual if not spiritual guide is also fulfilled at Novell, which enters into the relationship as a consultant on church affairs.

Another Majorcan in the fight

The link between Salinas and Novell’s eventful forced early retirement is established through the Majorcan Cardinal Luis Ladaria, Jesuit like Bergoglio and his man of maximum confidence, to the point that the Vatican wielded diplomatic immunity to free him from the bench in the trials for covering up pedophilia in Lyon.

Ladaria is not only the Grand Inquisitor as Prefect of the Congregation for the Doctrine of the Faith, was also in charge of re-educating the bishop of Solsona as director of his doctoral thesis, when Novell was sent to the Gregorian University to calm his youthful rebellion. And the Mallorcan cardinal, a profound connoisseur of the island’s high society, would also be decisive when it comes to settling the Salinas scandal with a scalpel. His crime was exhibitionism, numerous bishops have maintained relationships with the discretion of the case.

It is difficult to imagine that Novell’s departure was the fruit of a personal decision without Vatican interference. In the Mallorcan precedent, the persistence of the aggrieved husband paid off, you’re welcome it served that the bishop of Mallorca moved away from his secretary. On September 8, 2016, and the date will be significant, the Bulletin of the Holy See published that “Pope Francis has accepted the rstatement presented by Javier Salinas to the pastoral government of the Diocese of Mallorca. “After his dismissal, he was cornered and demoted to” auxiliary bishop of Valencia. “The events came to light on December 8, the feast of the Immaculate Conception. The guillotine It fell exactly nine months later, the day the Church celebrates the birth of the Virgin. Rome took the term of a virgin pregnancy, from woman to woman, a direct denial to those who insist that the Vatican does not know the irony.