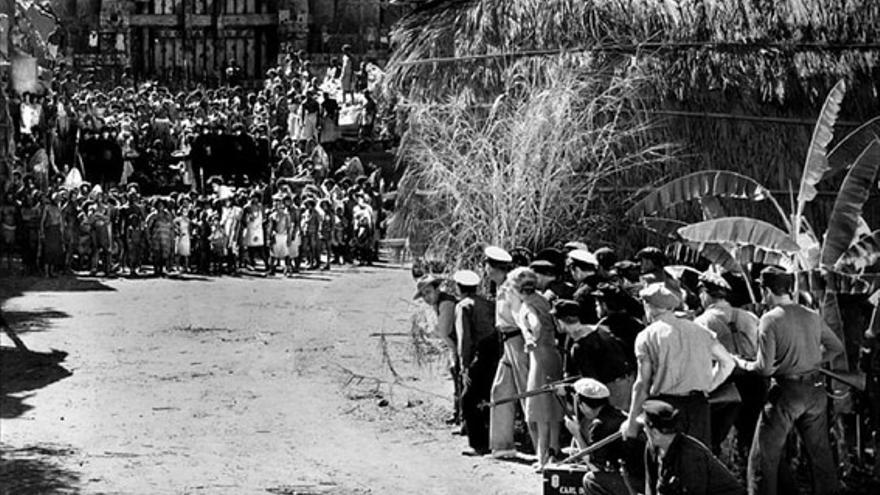 And the same racist argument presents fims like “The birth of a nation” or “Tarzan of the apes.”

These are some of the conclusions reached by the UA researcher Juan Antonio Roche Cárcel, an expert in Sociology of Culture and the Arts.

Explain that in a historical moment presided over by the economic crash of 1929, the American film industry produces the 1933 film King Kong and that the same crack is behind the fear of the other.

Roche Cárcel has demonstrated the relationship between crisis, fear and xenophobia horror movies in general and King Kong in particular, and how this movie embodies the fear of black white people.

The analysis and results have just been published in the scientific article “King Kong, the Black Gorilla” in the magazine Quarterly Review of Film and Video.

The scientific article proves the link between horror films and the crisis, the emergence of fear among citizens and the increase in xenophobia.

Roche recalls that “in moments of crises increase fears, and among those fears xenophobia increases, the fear of the other ”.

The great economic crisis of the time led to the mass unemployment and a population exodus, which moves from the southern states to the big cities, states populated by large numbers of black people. The fear of the crisis and the fear of the black race feed off each other.

Going deeper into this context, the great migration occurs, which is concentrated in ghettos.

Another factor that is added is the legislation of large cities, which hinders the development of businesses of people of color.

All this, says the UA researcher, “is what generates a breeding ground of fear of the other. A fear joined by the patriarchal, colonial and racial ideological system that further intensifies discrimination against the black race. This is taken to the imaginary plane, in the myth of King Kong. ”

“In this imaginary – abounds – people of color are turned into animals (gorillas and monkeys) and also whites are afraid of their sexual potency, since they rape their women. On the imaginary and ideological plane, these people, who they are monsters, they live on the island of the Skull ”.

Roche recalls that in the 1933 film the island is perceived as a “virgin, hostile, wild place, far from civilization, where history has not arrived. A place that seems as if it were colonized by whites upon arrival; and where monstrous, strange beings live ”.

The sociologist sees how all this economic, political, social and cinematographic context takes shape in the character of the gorilla King Kong. To clarify this metaphor, Roche adds how at the beginning of the film “scenes appear that show the catastrophic effects on the poorest and most marginalized neighborhoods”, scenes about which he affirms “were censored. But it gives an idea that the film was created under this conception ”.

Racism is implicit in several arguments. This is the thesis defended by the researcher.

The first argument is who is King Kong: he is a black man. As this position shows, Roche notes the phrase “we are tired of having gorillas in the city” said by one of the characters, the middle-class white woman at the time of the film who is in the theater and is going to present the King Kong chained show in theater.

A second argument in which racism is implicit is that no black worker appears in the entire film. And when it appears it is exclusively on the island of the Skull, and it is a wild and ancient tribe.

Or how when King Kong dies and falls from the skyscraper, “no journalist or citizen is of color. Nor do we see a single one in the theater scene: all the people are white. Even at the end of the recording of the film, the production team, directors, producers and artists, take two photographs; in one of them there are only whites. In the other, the whites appear and, located behind, represented and dressed like those of the island’s tribe, we see blacks ”.

For Roche, this total absence of black characters in the entire recording is very surprising. As if the crisis did not affect people of color who, on the other hand, are those who affect the most.

The third argument that supports his claim of racism implicit in the 1933 film is how blacks are treated, and it is as primitive and with hunter-and-colonial voyeurism. We see blacks dressed as gorillas, performing a ritual. The whites carry cameras and rifles, “as if the camera were an element of colonization of the territory,” he says. “King Kong eats blacks and they sacrifice the youngest girl in the tribe to feed the gorilla. On the other hand, he does not eat the white woman because he falls in love with her, in a show of sexual bestiality ”.

However, the scientist affirms that the film is riddled with racism linked to a patriarchal system and colonialism.

The researcher still finds a fourth argument to affirm how racism is implicit. “King Kong is an object of desire and fear.” Roche explains how, in Western art, women have been considered sexual objects, of desire and of fear. The whites go to the rescue of the white woman.

And finally, a fifth argument supported by the world where blacks live. “They are huts, they don’t know agriculture, they use spears, they don’t know technology either; It is a lost and uncivilized world on Skull Island, in clear contrast to the civilization of New York City ”.

For the sociologist behind the film “there is a racial, colonial and patriarchal system. The film intensifies racism, recreates those fears of the population and makes them spectacular. The cinematographic imaginary dramatizes, intensifies reality and increases emotionality. The idea behind the film is that of the society that is going to come out of the crisis. The achievement of scenes shows it this way: the film starts from the crisis; the monster that kills; the girl is rescued, and the possibility that society will come out of the crisis ”.

For Roche it is clear that “the fears of the time are embodied in a thirty-meter gorilla, as well as in the buildings of New York and the crisis of the time.”