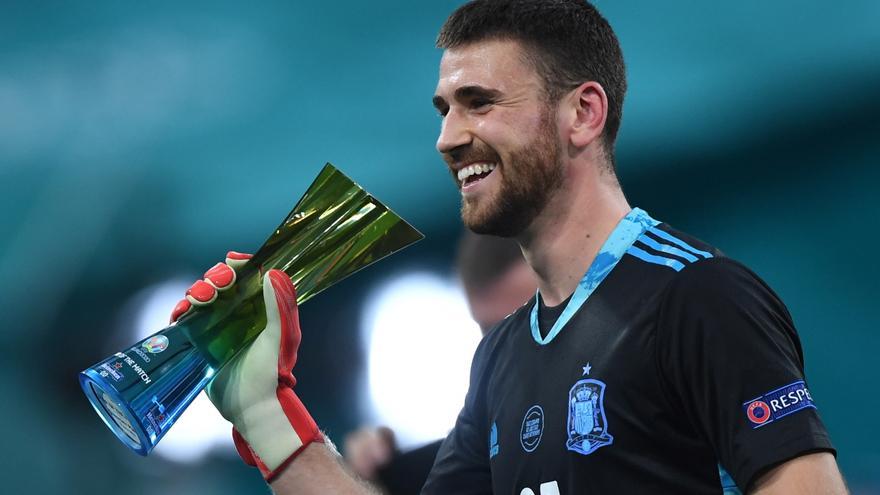 The goalkeeper of La Roja and Athletic has a brief and curious relationship with Elche, which for the recent time possibly all the green-franj fan will retain in memory. Simón belonged to the Elche discipline for 19 days during the summer of 2018, in which he was loaned to the team then trained by Pacheta and later played back, just three weeks later and with the league start just around the corner. What happened then?

Elche and Athletic agree on the loan of Unai Simón, a youth squad from Bilbao, to compete for the starting place in the franjiverde goal with José Juan, one of the heroes of the promotion to the Second Division. In this way, Pacheta had at his disposal a tall, young and future goalkeeper, who could mix wonderfully with the veteran of the current Alcoyano goalkeeper. The deal was for one season, until June 30, 2019. Few thought at the time that it would last much less.

Unai Simón meets his new teammates and joins the group’s discipline at Pinatar Arena. That same day, the team plays a friendly against Cádiz, in which the Basque does not participate, although he does jump onto the grass to perform training exercises and watch the game from the stands.

The new Elche goalkeeper, two days after signing, wears the shield of his new team for the first time. He does it in El Collao, in front of Alcoyano, in the Ciutat d’Alcoi Trophy. He replaces José Juan at half-time and plays the second half. Concede a goal in the first minute and can not avoid the defeat franjiverde in the penalty shootout, in which he does not stop any maximum penalty, contrary to what would happen in Saint Petersburg last Friday.

Elche present Unai Simón at a press conference and the current Spain goalkeeper offers his first impressions, after only four days as a green franj. The meta acknowledged having integrated perfectly into the group dynamics, something that would become clear later, when he met in concentration hotels with those who were his companions for less than a month and proved to have made very good friends in a very short time.

Unai Simón plays his second game as a franjiverde, first as a starting goal. He does it against Granada in Campoamor, in a duel that ends without goals. The defense, despite not being able to count on Gonzalo Verdú or Neyder Lozano, does a great job and the Vitorian goalkeeper hardly has to make any worthwhile interventions.

Elche appear before their fans at the Festa d’Elx. He does it in a duel against Almería in which José Juan is chosen by Pacheta to occupy the goal as a starter. Unai Simón plays the second half and ends up being part of the last champion team of the Elche summer tournament. The franjiverde team wins 1-0, with a goal from Gonzalo Villar. These would be Unai’s first 45 minutes with Elche at Martínez Valero. And the last ones.

In the middle of the holiday and with the opening day of the league just around the corner, Unai Simón leaves Elche and returns to Athletic, after a series of movements in the soccer market that end up causing collateral damage to the people of Elche: Real Madrid sign Courtois from Chelsea; the English join Kepa, from Athletic; and the lions decide to get Unai Simón back, especially after Iago Herrerín’s injury. Pacheta is left without one of his two goalkeepers three days before the official season begins. Thus ends the 19 days as Unai Simón’s franjiverde. Three years later, the goalkeeper has established himself as Athletic’s starting goalkeeper, he has also reached the starting position in the national team (in conflict with a green-hearted Frenchman like De Gea) and has risen to Spain’s hero after the penalty shoot-out against Switzerland. For its part, at the same time Elche remained in Second, rose to First and managed to stay in the elite. Neither side of that fleeting summer love story has fared well.