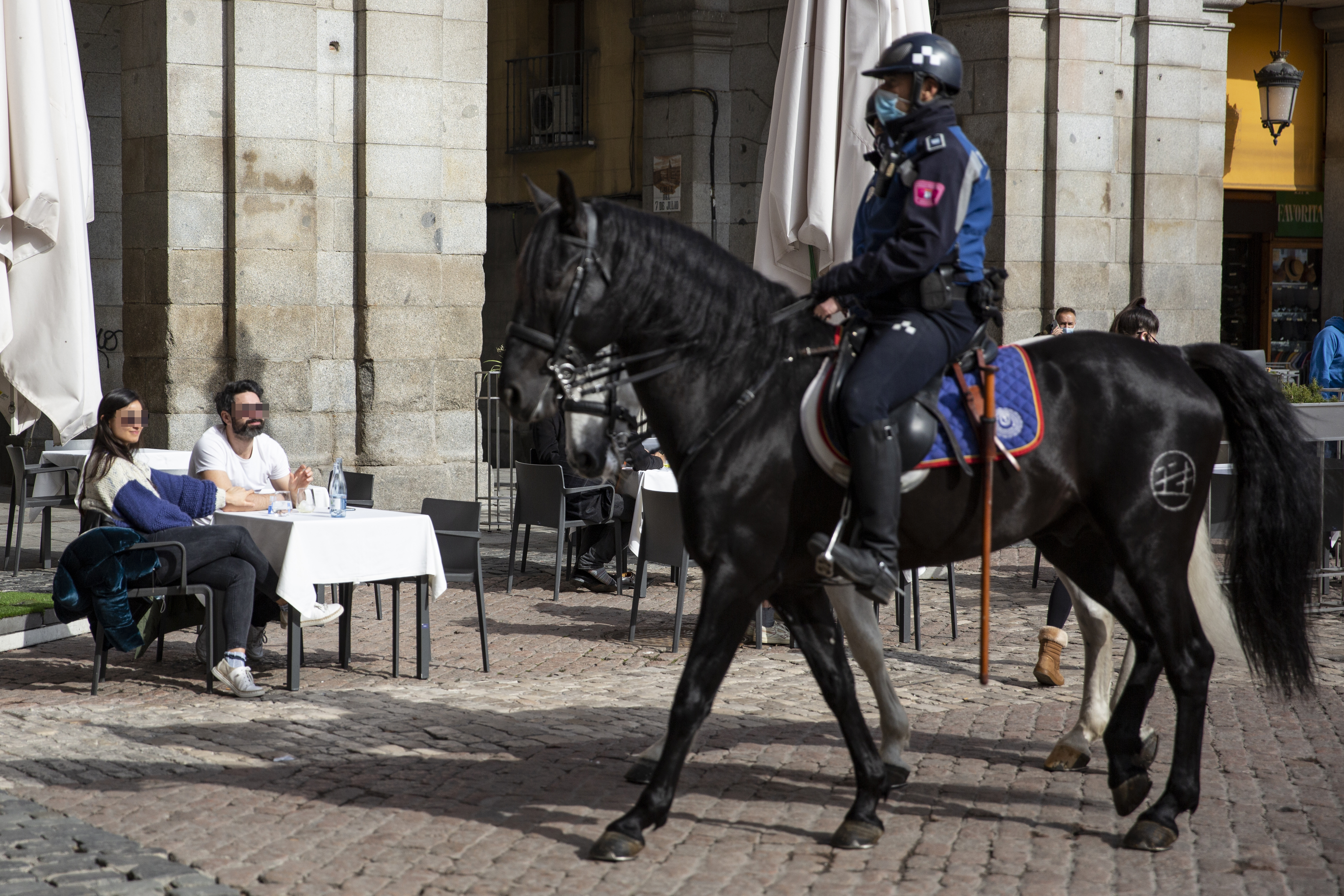 Only Woody Allen’s clarinet is missing. At noon and with a scandalous sun over the Plaza Mayor, a French couple closes their eyes to the sound of a Coke and a bottle of sparkling water. Unaware of a global pandemic, without a mask in sight, they smile, take photos, like two sunflowers in love with their stomachs up. 29 years old and with whitish complexions, the anesthetist Hugo and the psychologist Estel took a flight on Sunday from Lille – 220 kilometers from Paris – to rest for five days in the capital of Spain. “We needed a parenthesis, because in our city everything has been closed for six months,” Hugo smiles as he discards the olive cap in a corner. “I keep sending photos to my mother! This is incredible. We are at home at six in the afternoon! ” His partner Estel, of few words, joins the conversation with a catchphrase: “A coke on a terrace, damn it, this is paradise.” Madrid is a croissant.

And a large terrace. 12 days ago the Community of Madrid expanded the number of diners per table abroad from four to six. President Isabel Díaz Ayuso forced all Madrilenians to wear the mask both inside and outside because, until that day and almost a year after the pandemic, it was only a recommendation. After two weeks of regulation, the balance is simple. Here nothing has changed and here everyone does what they want: Freedom Y legality Madrilenian.

“The mask creates a problem for me with the customer,” says Buenos Aires waiter Federico Herrera, 52, as he prepares delicious ham and tomato toast on country bread. “If I go over and tell that guy there that he has to take her, he gets angry. I have chosen not to say anything or that if they see the police hanging around the door, they will bring it up ”. Only in Antón Martín are there more bars than in all of Norway, according to neighborhood neighbor Joaquín Sabina. Herrera’s Benteveo is a classic. With an Argentinean style, this cantina offers sparkling coffees, homemade jams, churros, empanadas or menus of the day with vegetable cream and zucchini and leeks puff pastry. It is a chameleonic place.

– How is Ayuso getting along?

– (Laughs) Honestly it benefits us, but I am one of those who believe that everything should be closed and that they give us help.

Of the 10 clients of the store, only one was wearing a mask. Throwing a cane in Madrid has been a political issue since the beginning of the pandemic. The hospitality industry is one of the sectors that has generated the most jobs in Spain in recent years. In the capital there are about 270,000 families. A business that contributes 4.6% of GDP to the city. Alejandra Martín and Lucía Alvariñas, aged 28 and 29, have met for breakfast inside the Benteveo. “I take the risk of not carrying it inside because there is a certain apathy,” he says as he takes it out of his pocket. “I have a certain confidence because they check me weekly at work. In the end you become a small nucleus of friends and I take the risk with them ”. Of the mask, a while later, no sign.

Walking through the terraces and bars in the center of Madrid offers a new image of the new times. What used to be a pure object of the operating room is now like wearing briefs or panties. There are flags of Spain, polka dots, colors, names and even advertising. There are also different modes of use. Those who cover themselves without covering their noses, those who smoke, those who are going to smoke and don’t light up. And those who go to the terrace, sit down and take it off like they were recently vaccinated.

“The truth is that we are a little fed up with everything,” says twenty-year-old Basque Ane Calzada, who is studying a master’s degree in Latin American studies. Calzada has met her friend Uxue in a bar around Plaza Santa Ana. “On the one hand I say that Madrid is the host, but on the other hand it scares me. They have never caught my attention for not wearing it on the terraces ”. The fine, if it arrives, is 100 euros. “In the Basque Country everything has closed and it is depressing.” The writer Xoan Tallón writes in the book of chronicles As long as there are bars: “A town that loses the ability to call a meeting around a bar counter is a dead town. It doesn’t matter if it still has inhabitants. As a people, it is a corpse ”.

Since the beginning of the pandemic, the Madrid government reported to the media that 80% of the infections occurred at home, without breaking down where this data came from. On Tuesday, the Ministry of Health published for the first time that the outbreaks occur, and in this order, in social gatherings, at work, in hospitals and in the family environment. Figures that demolish the argument that the president’s team has defended. Ayuso has based his political strategy for the pandemic around the hospitality sector. “For Madrid, health comes first, but it cannot be separated from the economy and time is proving us right,” he said yesterday at another event in the main building of Puerta del Sol. The region has been the most lax in terms of schedules. The bars have never been closed. This Thursday, in addition, the president plans to announce that the hotel business will close at 10 p.m., instead of at 9 p.m. as before.

“The thing about the mask is a godless thing. People come by and do what they want, ”says the Galician José Manuel Silva, 44, preparing a single coffee. “Every now and then the police come and say, ‘Guys, stay tuned.’ Silva runs the morning shift at Café San Millán, a coveted corner in La Latina. “We cannot control customers either inside or outside. The warning lasts two minutes for people because they go to their ball ”. Inside, the TV is on and silent. Ferreras speaks and gestures about the pandemic. A man without a mask watches him as if looking at his door number on the airport panels with the finished cup of coffee.

In the twenty bars of the center consulted, the diners and waiters are up to the nose of the norms. Another fact. 69% of Madrid consumers prefer to have a beer in a bar rather than at home, a percentage six points higher than before the pandemic, according to a study published this Wednesday by the Gelt platform, which has 1,200,000 households that They use their application and they analyze 800,000 purchase tickets per month.

The Galician Óscar Gil, dressed in a black suit, watches him daily. “As soon as people have a beer, everything doesn’t matter. The problem is that. They come to me to ask for safety rules and I cannot force anyone. My job is not that. I am a waiter and they demand something of me for which they do not pay me. It is that I have to fight with a client because the police tell me that he is badly seated and I am not responsible for the infections. What do people think that I don’t suffer? That I don’t have children to feed? That I don’t have to pay the rent? We are not robots and we are also on the front line ”. Gil, after being angry, boasts a delicious rice with lobster at his Cantalejo de La Latina restaurant.

A few meters away, in the Plaza Mayor, his colleague from the union Alfonso Vargas calls the attention of any passer-by: “Gentlemen, a straw on the terrace? Do you want to eat?” He says he still has eight years left to legally retire. “People are up to their hats. This misery is going to end everyone. In my restaurant we have a lot of French customers, I don’t know where the hell they come from. On Sunday one told me that they took a cheap flight or I don’t know what to do for the weekend ”.

– Do you notice if they wear masks?