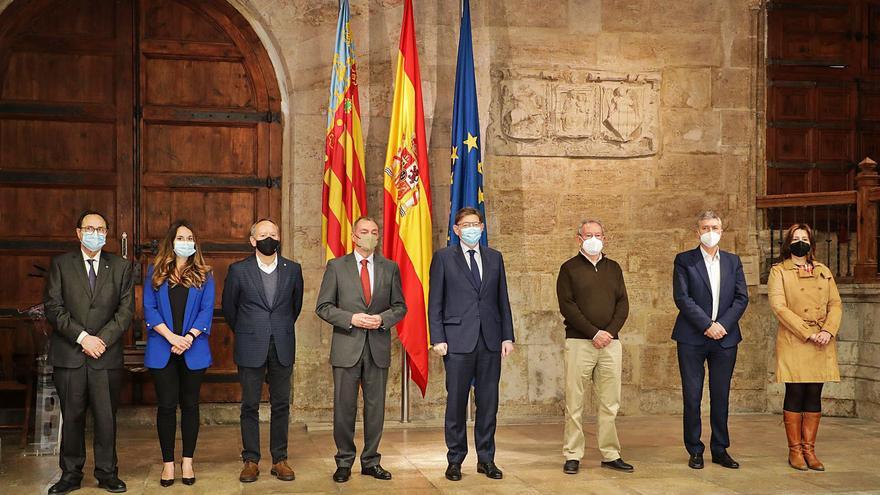 The event was attended by the regional secretaries of CC OO and UGT, Juan Cruz and Ismael Sáez, respectively, as well as the president of the CEV, Salvador Navarro, who signed the agreement. Also present were the president of the Generalitat, Ximo Puig; the Minister of Economy, Rafa Climent; that of the Treasury, Vicent Soler; and the Minister for Participation, Rosa Pérez Garijo. The presentation of the signature was carried out by the general director of Coordination of Social Dialogue, Zulima Pérez.

The pact is part of the philosophy that emanates from the recently approved Valencian Law for the Promotion of Social Responsibility, whose regulation is in the development phase, and through it the Generalitat is urged to introduce in its tender announcements and, specifically, in the particular administrative provisions, the labor clauses that guarantee the stability and quality of employment, while respecting labor standards. It also establishes the mandatory subrogation of the personnel who provide their services to the Administration through contracts, so that they do not lose any of their rights or acquired salary conditions.

The secretary of the UGT, Ismael Sáez, pointed out that, “indeed, we have a social responsibility law, but also a regulation that has not just arrived. That is why we wanted to ensure something that concerned us, such as the subrogations of employees who work for the Administration through subcontractors. It was essential to guarantee job stability ”. Sáez also emphasized that the agreement comes at a time of political tension, in which the country “is more in need than ever of social dialogue for the progress and well-being of citizens. It is, therefore, an unprecedented pact that, moreover, acquires greater prominence with this solemn act.

For his part, the secretary of CC OO, Juan Cruz, stressed that it is the “first bipartite agreement between employers and unions in the last five years, the result of the dialogue fostered in the Valencian Community by the Generalitat.” After praising the content of the agreement, the union leader took the opportunity to criticize that “we are one of the few autonomous communities that does not have its own court of contractual appeals. It is necessary to have it so that the conflicts are resolved here and not in the central court.

The president of the CEV, Salvador Navarro, expressed his satisfaction with an agreement that “is the result of social dialogue” and that will allow “the inclusion of labor clauses that guarantee stable, inclusive and quality employment”, while providing “security legal for both companies and workers.

In this sense, he added that, in the current context, “we are concerned that jobs will be destroyed due to the pandemic, and that the jobs generated will not be of quality.” For this reason, he advocated working actively to achieve «reduce the unemployment rate among young people, those over 55 years of age and women», applying policies that affect equality, training, and flexibility and modernization of the Work market”.

Finally, the president of the Generalitat, Ximo Puig, advocated for social dialogue to promote a stable framework of labor relations that continues to guarantee the quality of employment that is created in the Valencian Community. “The ability to reach agreements demonstrated both by the autonomous administration and by the social agents generates an extraordinary reputation that can be seen in the trust that large companies are placing in the Community,” he stressed.

Puig, in this regard, stressed the need to guarantee safety scenarios for workers, and also healthy competition between companies. “We all have to have clear rules,” emphasized the head of the Consell, for whom economic recovery cannot go through wage devaluation, “because this would imply having a stingy, short-term and myopic vision,” he summarized.

One hundred thousand people hired in a single year

The general secretary of the CC OO-PV union, Juan Cruz, highlighted in the act of signing the agreement that in 2019, the last year for which data is available, more than 29,000 public contracts were made, mostly of a minor nature. and about 3,000 of a larger nature, which affected about 100,000 people. Hence, he highlighted the importance of the pact, on the basis that these workers are guaranteed “certainty and stability in employment.” The signatories also undertake to transfer this issue to collective agreements where subrogation is not regulated.