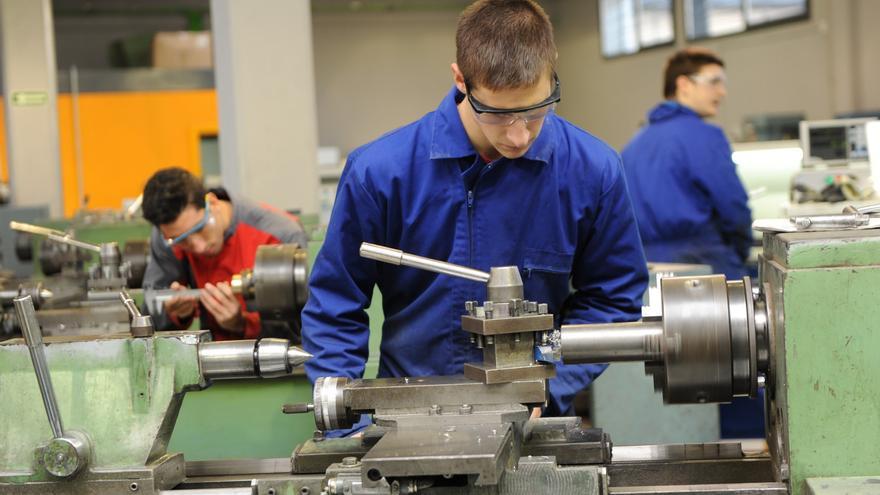 The pension reform is in the intermission: the first part was negotiated for months by unions, employers and the Government, it was signed on July 1 and has already entered into force, and the second half, which includes such important matters such as the increase in contributions and the amounts of the maximum pensions, has to be dealt with immediately, because the commitment with Brussels is that it is on track before the middle of the year. But before starting this new phase, the unions demand that an issue be fixed that is compromised, but has been paralyzed for months: that unpaid internships also count as a quoted period, so that interns have more rights when the time comes for their retirement.

The moment is opportune, because after months focused on the labor reform, the negotiators of the Government and the social agents have returned to retake the pension table to finish off some fringes that were pending in last summer’s pact. In the first meeting, on Thursday, a crucial issue was addressed: the reform of the contribution of the self-employed, which affects more than three million self-employed workers; but at that same table, the unions stated that they want to keep the commitment regarding unpaid scholarships fulfilled now. Their importance, measured in number of affected, is also notable: they reach -according to CCOO calculations- over half a million students of FP and University a year, and the vast majority of the two million people who study each year to obtain a degree or degree will pass, at some point in their training, through these internships.

The pension pact signed in July by the President of the Government and the business and union leaders specifies that “in the maximum period of three months the regulatory development will be carried out with which the effective contribution to the Social Security system of the people who carry out a training practice will be guaranteed, even if it is not paid”; even if August were discounted as non-working, the commitment would already be several But the social agents recall that this delay is added to a previous one, because the intention to extend the obligation to contribute for unpaid scholarships was already established in another rule promoted by a Pedro Sánchez government: the royal decree-law 28/2018, which was approved at the end of that year to be able to revalue pensions and which included, in its fifth additional provision, a promise very similar to the one that is also being broken now, because the term it set was also three months. In other words, more than three years of commitments have not materialized.

On this occasion, the July pact also includes a significant discount on the future obligation that companies with unpaid interns would assume in terms of Social Security contributions: the agreement states that “a reduction of 75% in the contribution will be applied to these internships […] financed from the state budget”. That is, compared to the contribution of paid interns, for which companies contribute to Social Security the same as for a training contract (61 euros per month), which companies would have to contributing for an unpaid intern would be about 15 euros per month.

“The objective of this measure is not collection, it is not to obtain resources for Social Security, but to make a gesture in favor of young people who dedicate more time to their training and therefore enter the labor market later” explains Carlos Bravo, Secretary of Public Policies and Social Protection of the CCOO. “What we want is that, in addition to their title, they have recognition in the contribution period, which will thus help them to gather the 37 years of contribution that will be necessary from 2027 to access 100% of the regulatory base of the pension; It is a commitment to good pensions”.

This recognition, Bravo points out, would deepen the direction that was already adopted in the 2011 reform of expanding rights for the sectors of the population that are most affected -according to the data- by the gaps in professional careers, such as women with children or young people affected by precariousness. It was in one of the regulations derived from that reform, more than a decade ago, when paid interns were included for the first time among Social Security contributors, and now it is a matter of extending that condition to those who do not get paid for their practices. Then, just like now, there was also resistance in the educational community to this extension of rights.

And it is that the difficulty in approving the new commitment is not, according to the unions, in the Ministry of Inclusion, Social Security and Migration, which is favorable, but in those of Education and Universities, which allege that the training centers resist the contributions, because that scares the companies that agreed with them on curricular internships, and if the companies flee, the universities and FP centers are left without the employment exchanges with which they attract students. In the social dialogue they expect that, in the coming weeks, they will maintain meetings with those departments to try to overcome their reticence.

Also Read  Electric cars in Alicante: all about buying, renting or recharging

Since the obligation to contribute for paid scholarship holders was definitively established in 2013, Social Security has registered a monthly average of 80,000 contributors due to these practices, figures that plummeted with the pandemic, due to the disruption it generated in academic activities.