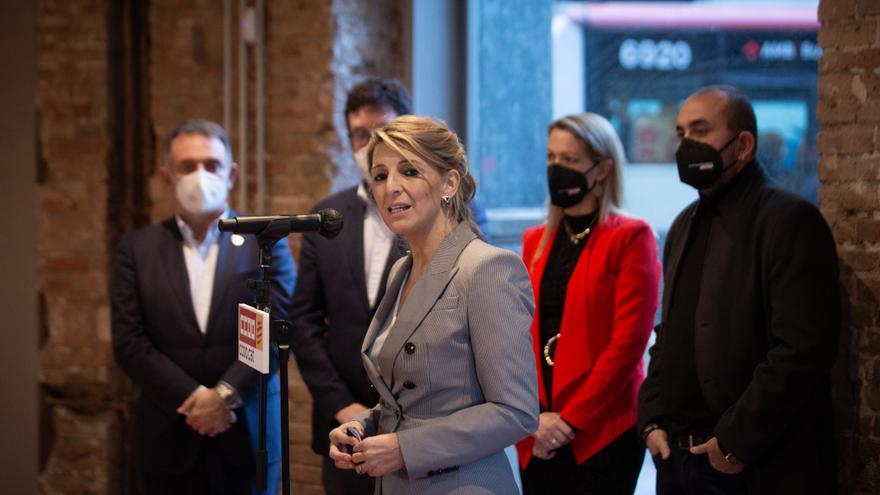 UGT and CCOO launch this Thursday an explanatory campaign of the labor reform that is going to take their directorates throughout Spain to transmit to their members and cadres the importance of agreement reached before Christmas Eve by unions, businessmen and the Government. And that the acts begin just one week after the decisive vote in Congress to validate the norm is not a coincidence, nor are the places chosen to inaugurate that round: Bilbao and Barcelona. “The idea is to create a favorable breeding ground for ‘yes’‘, of course”, confesses a union leader. And it is that some of the parties that can be decisive for the approval are Catalan and Basque forces that until now are reluctant: ERC, EH Bildu and PNV.

The explanatory campaign will involve different leaders of the UGT and CCOO, who will sometimes hold joint acts and sometimes separately, and which will sometimes have a more open scope, and others more internal, but the first two acts are at the highest level, public and with the intention of highlighting the virtues of what was agreed: the leader of the UGT, Pepe Álvarez, begins this Thursday with a meeting of his Executive in Bilbao in which he will take the opportunity to give a press conference, and on Friday both he and the Secretary General of CCOO, Unai Sordo, will address their members and cadres in an assembly in les Cotxeres de Sants, in the center of Barcelona.

The acts are, in principle, union and it is not expected that the leaders take advantage of the trips to have meetings with the aforementioned parties, “which does not mean that contacts will not take place; it can happen, but they are not on the agenda right now,” explains this leader. In any case, it confirms that talks with these and other political forces have been constant in recent weeks. However, the result of the vote on February 3 still seems uncertain: “there are still days for negotiations and movements to take place. My impression is that the reform will be validated, although I do not dare to say today neither with what votes nor in exchange for what commitments”, he summarizes. Broadly speaking, the possible options for the Government for next week’s vote are two: seduce the groups that have been members of the Executive in a good part of the votes of this legislature (PNV, ERC and EH Bildu), or attract Citizens and get a combination of supports and abstentions from other small groups.

Also Read  Health distrusts rapid tests, but not the strainer of relatives at Christmas

The trade union initiative coincides in many aspects with the Official visit of the Second Vice President and Minister of Labour, Yolanda Díaz, to Barcelona, who met this Wednesday with the directors and members of the UGT and CCOO and who will visit the SEAT factory in Martorell this Thursday, one of the emblems of the industry (and of the workers’ struggle) in Catalonia. During that visit, in addition to announcing the opening of the Minimum Wage negotiating table, Díaz defended the importance of the labor reform to improve the lives of workers. In the Government and in the unions they deny that they have coordinated their actions: “an explanatory tour was already planned, we have only altered the order so that these cities go before the vote takes place”, they say from the unions; “UGT and CCOO have realized that it is important to explain the details of what has been agreed so that its advantages can be seen”, they assure from Labor.

Regarding the state of the negotiations for validation, the feeling in the unions is that the positions are closer than what is said publicly, but they also see concern the escalation of statements of the last few days, because they can make an agreement impossible: for example, the refusal of ERC or Bildu to agree on content in the future, demanding that they be incorporated into the text that is now awaiting approval in Congress, would surely force CEOE to disassociate itself from the reform (businessmen insist that “not one comma” of what was agreed upon cannot be changed in order to count on their commitment). The centrals expect that as the end of the negotiation approaches, the left-wing nationalist forces will be forced into a pact: “the foreseeable thing is that during the next year it will be noted that the reform favors the stabilization of thousands of contracts; stay out for insisting on including measures that are very good, but that can be agreed in another regulation… they will surely think about it a lot, “they explain.

Also Read  A psychiatrist diagnosed me as autistic with ADHD. Now I can finally prosper | Autism

After Bilbao and Barcelona, ​​the unions will continue their tour of cities such as Valladolid, Seville or Santiago (UGT and CCOO are still closing days and dates); meanwhile, the employers do not plan any similar act: in CEOE they assure that the president’s agenda for the next few days will take place in Madrid. Of course, they confirm that they have maintained contacts with the political groups, and from the other side of the social dialogue they see the presence of the former PP minister Fátima Báñez as relevant in a recent meeting between the leaders of CEOE and Ciudadanos, Antonio Garamendi and Inés Arrimadas . “We had never seen Báñez in a meeting of this style,” says a union official, “it is a message to the PP [que se opone a la convalidación de la reforma] that the architect of Rajoy’s labor regulations is in a meeting with a party willing to approve the pact between the social agents and the Executive”. The employers deny that the presence of Báñez, who is now president of the Foundation CEOE, can be read in a political key.