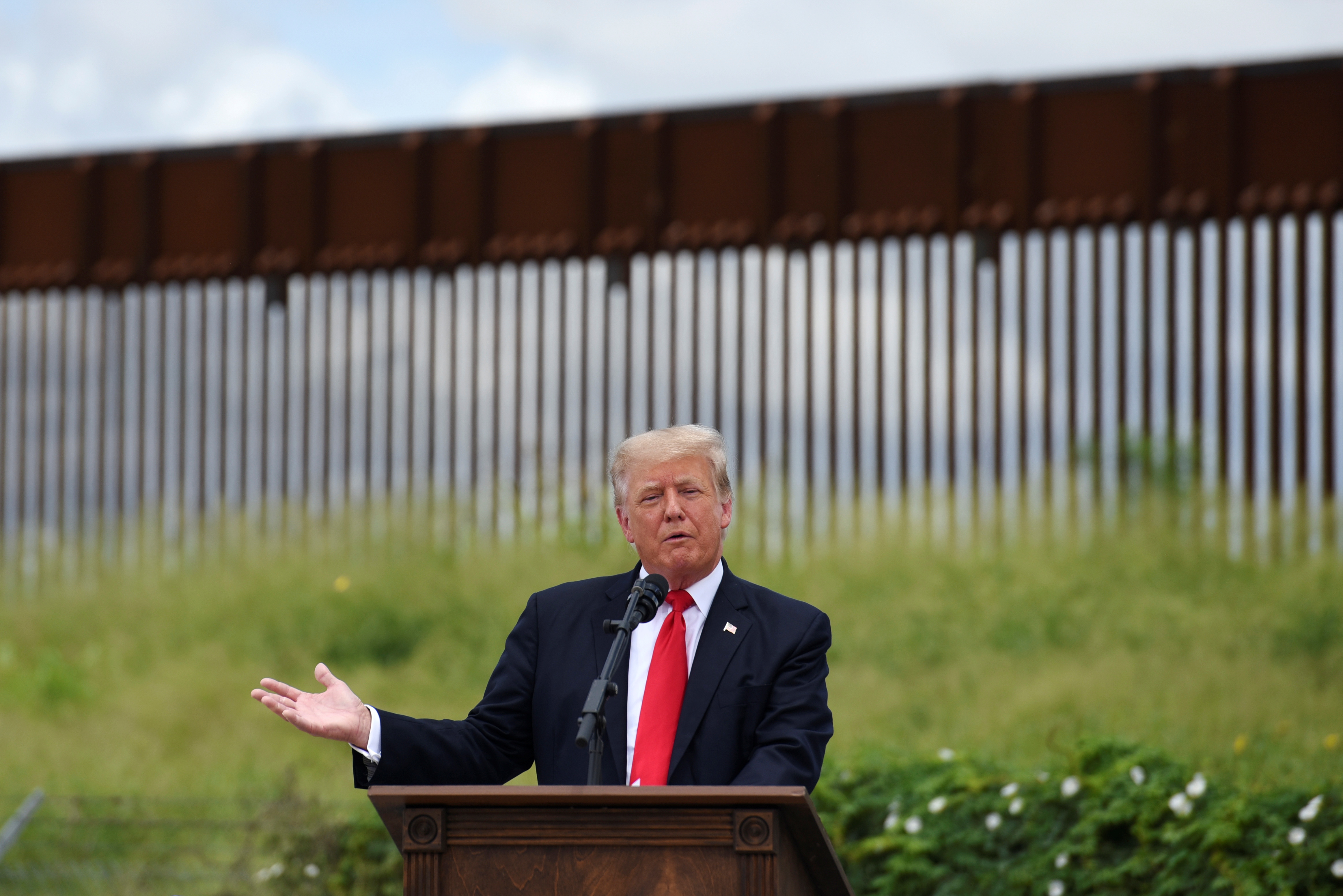 You always go back to the places where you loved life, Chavela Vargas sang. Former President Donald Trump has visited the border wall in Texas on Wednesday to complain about how the government of Democrat Joe Biden has disintegrated the immigration policies that he promoted in four years of Administration. “Do they really want open borders or are they incompetent?” The former president asked this morning, as the United States is on track to record the highest numbers of illegal immigration in 20 years. “We made the border one of the safest places … it was the safest border this country has seen,” Trump added in the city of Weslaco during a meeting with county sheriffs on the border and with the governor of the State, Republican Greg Abbott, who recently promised to contribute $ 250 million in public money to continue the construction of the symbolic barrier.

“All Biden had to do is go to the beach. If I had not done anything we would have the safest border ever seen, it was improving and improving, “Trump joked in front of one of the pieces of the wall that were erected in his Administration in Hidalgo County. “We did 500 miles (800 kilometers) despite two and a half years of litigation,” said the former president, who stated that the controversial work would have been completed “and even painted” had it not had as much opposition from Democrats as Nancy Pelosi .

It is the first visit that Trump has made since he left the White House on January 20. The place chosen by the ex-president was the county of Hidalgo. It is the same area on the border that he last visited as president. Today he does it in a very different situation, censored by social networks after the assault on the Capitol on January 6 and with judicial problems on his heels. The New York prosecutor’s office will file charges on Thursday in a criminal fraud case against his company and its chief financial officer, Allen Weisselberg.

With Trump’s return to the border, the dubious claims of post-truth times also returned. The former president assured that his security policy “stopped human trafficking, especially women” and drug smuggling “decreased between 78% and up to 90% in some cases.” “Fentanyl, it is true, fell to almost nothing … I suppose because we were tough,” said the former president despite the fact that the trafficking of this synthetic opioid was one of the great concerns for his Administration until January 2020, weeks before that the coronavirus crisis exploded.

In his reappearance, the Republican also spoke of the November 2020 elections that threw him out of the White House, elections considered fraudulent by the party’s rank and file. “We had 12 million more votes in this election than in 2016 … but the counting of the votes was better for them (the Democrats) … We must improve our elections because otherwise we will have a banana republic, a third world country because our elections are a disaster, ″ said the former president, surrounded by mostly white men. A recent poll indicates that a third of Republicans believe that Trump will be reinstated in the presidency during this Administration, a process that is impossible for institutions.

Trump’s visit came five days after Vice President Kamala Harris, charged by Biden with managing the migration crisis, made her first trip to the border with Mexico since the start of the government. This was a claim made by conservative sectors, who consider the situation of illegal immigration neglected. The agency Reuters reported a few days ago, citing Department of Homeland Security authorities, that the border patrol has made more than a million arrests of illegal immigrants since October 2020, the start of fiscal year 2021. To continue at this rate and still with three months ahead, this year will become the one with the most arrests since 2000, when 1.7 million people were arrested. Authorities have yet to release official figures for June. May recorded historic numbers with 180,000 arrests on the line.

Most of the arrests were made in the Del Rio area, the region visited by Trump on Wednesday and avoided by Harris, who preferred El Paso, a Democratic sector in the highly Republican state. The maximum monthly number of illegal arrests recorded in the Trump administration was 150,000 people. Governor Abbott is one of the most critical of Biden’s management. “People on the border are seeing their lives altered, ranches invaded, houses lost … this is the worst situation we’ve ever seen,” Abbott said.

The democratic voices of the entity, although minority, have been very harsh with Trump. “The wall that Abbott and Trump are trying to get paid for by Texans is not just a waste of hard-earned money. It is also an anti-American symbol of hatred that separates and intimidates our communities, “said local congressman Filemón Vela, who a few years ago gained notoriety by asking Trump to” stick his wall up his rear. “